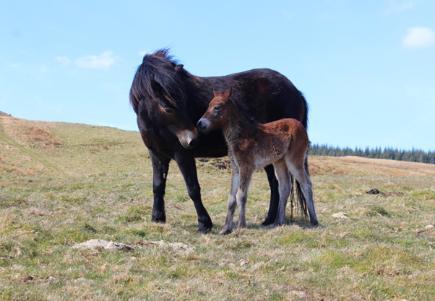 A herd of Exmoor ponies, an ancient breed classified as endangered by the Rare Breeds Survival Trust, were introduced to the University of Glasgow’s Cochno Farm in November 2020. The four mares, one accompanied by her 2020 foal, and a stallion are being used in research into Exmoor pony conservation and rewilding, the subject of Debbie Davy’s PhD, which is funded by the Exmoor Pony Society as part of their centenary celebrations.
This collaborative project is supervised by Professors Barbara Mable and Jason Matthiopoulos from the Institute of Biodiversity, Animal Health and Comparative Medicine. Dr Marcello Riggio, from the Dental School, will be using the ponies in his research on relationships between microbial communities and animal health.
Following a severe genetic bottleneck after the Second World War, the current Exmoor pony population is descended from fewer than fifty foundation animals. Their selective grazing habits have led to their widespread use as conservation grazers on many sites in Britain and Europe, where they are believed to help control invasive plant species, improve biodiversity and contribute to the overall health of the ecosystems they inhabit.
Debbie has been breeding Exmoor ponies in the Highlands since 1982 but designed this project to investigate whether considering genetic variation could improve breeding management practices and to quantify impacts of pony grazing on habitat quality and plant diversity.  This rewilding project is particularly timely at the start of the United Nations Decade on Ecological Restoration (https://www.decadeonrestoration.org/).
Since their arrival the ponies have been attracting lots of positive attention from Cochno visitors and the herd is now being used in other student projects. The first Exmoor foal born at Cochno, a filly, arrived on 17th April, with a second making her appearance on 27th May. They are both growing and developing well. Their names will be chosen from a list of suggestions offered by staff and students and they will be registered with the Exmoor Pony Society, valuable new additions to the endangered Exmoor pony population