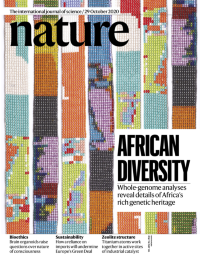 More than three million new genetic variants are uncovered in one of the most extensive studies of high-depth-sequenced African genomes reported to date. This study, published this week in Nature, provides insights into ancient migrations along the routes of Bantu-speaking populations.

Despite Africa’s central role in the origin of modern humans, our knowledge of the diversity represented in African populations has been sparse. An international team of researchers including the H3Africa Consortium and the Institute's Professor Annette Macleod, address this imbalance by performing whole-genome sequencing analyses of 426 individuals, representing 50 ethnolinguistic groups, including previously unsampled populations, to explore the breadth of genomic diversity across Africa.

The team show that these newly discovered variants were found mostly among newly sampled ethnolinguistic groups. They identified new evidence for natural selection in and around 62 genes associated with viral immunity, DNA repair and metabolism.
They observed complex patterns of ancestral mixing within and between populations, alongside evidence that Zambia was a likely intermediate site along the routes of expansion of Bantu-speaking populations.

These findings improve the current understanding of migration across the continent, and identify responses to human disease and gene flow as strong determinants of population variation.

The paper also featured on the cover of the latest issue of Nature: