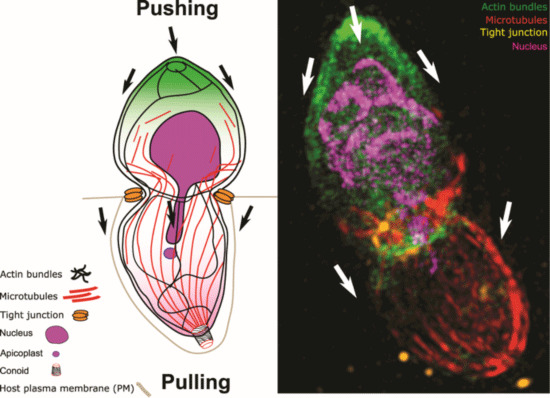 A novel invasion mechanism for Toxoplasma uncovered by iii scientists has opened the door for future studies that could lead to a better understanding of migration events and ultimately limit parasite and cancer dissemination through the body.

And lead author Del Rosario, a PhD graduate from Ecuador, is excited by the potential ramifications and impact it could have on the field.

He said: "The parasite Toxoplasma gondii is a highly promiscuous obligate intracellular parasite that can infect virtually any warm-blooded animal and bird, making it an interesting candidate for research.

"However, the parasite is also closely related to Plasmodium parasites, the causative agent of Malaria, meaning that some aspects of our research can be use to understand the behaviour of both parasites.

"A cell’s nucleus is the perhaps the most important element of a cell, as all the DNA is harboured inside of it. Our research uncovered a novel invasion mechanism for Toxoplasma, where the parasite’s nucleus is severely squished during the invasion procedure to allow its passage.

"This event can have important ramifications as the nucleus squeeze seems to not happen in some instances, meaning that it is not required in some cases.

"Our explanation of this event is that given the promiscuous nature of the parasite, it needs a wide range of invasion tools and sensing the host cell to adjust these tools is vital.

"We believe that some host cells will represent a tougher invasion target and the parasite alters its behaviour for each individual case, including cases where the nucleus is squeezed due to the toughness of the host cell membrane. In addition, this squeeze can potentially alter how the parasite expresses its genes, serving as a point of interest for future studies.

"Lastly, very similar behaviour has been previously observed in more complex eukaryotic cells such as mammalian cells during cell migration.

"In short, some cells migrate to move to different areas of the body - immune cells for example - and metastatic cells also present this capability. To perform this, they also need to squeeze their nucleus and protect it during migration through tight gaps, presenting a strikingly similar occurrence with our parasites.

"This observation opens the door for future studies to better understand these migration events so we can better treat them, both to limit parasite and cancer dissemination through the body."