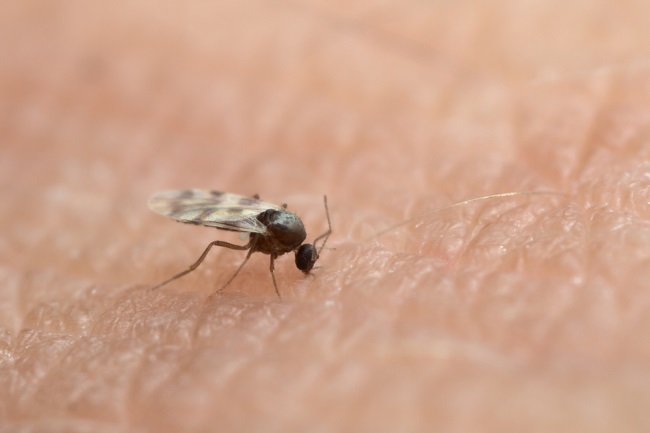 Scotland’s biting midge population carries previously-unknown viruses, according to new research published in Viruses and carried out by scientists at the Institute of Infection, Immunity and Inflammation's Centre for Virus Research (CVR)

The study used high throughput sequencing to study, for the first time, the total collection of viruses in the biting midge (Culicoides impunctatus).

The scientists discovered several new viruses in the ‘virome’ of the midges, including an alphanodavirus, two rhabdo-like viruses and a chuvirus. These viruses are mainly found in insects and other invertebrates, but some members of the alphanodaviruses naturally infect pigs and herons, sometimes causing death.

The newly-identified viruses were found to be sufficiently different from known species to be categorised as novel. However, there is currently no evidence that these viruses pose a threat to humans.

Despite their prevalence in Scotland, midges – small biting flies which are a predominantly a nuisance to humans – are currently understudied.

Yet midges are carriers of arboviruses (viral infections transmitted to humans from a group of insects) and were responsible for the emergence and spread of Schmallenberg virus (SBV) in Europe in 2011, and are likely to be involved in the emergence of other arboviruses in Europe.

There are at least 41 different species of biting midge described in the UK, of which 37 are present in Scotland.

Lead author Sejal Modha said: “The technology we used allowed us to look at the viruses carried by midges in a way that can’t be done in the lab, expanding our knowledge of the insect viruses in a way that could be very useful in future.

“What we found is important because biting midges can be carriers of arboviruses; and although midges are not currently a public health concern in Scotland – and we stress there is nothing for the public to be concerned about – our research gives us a better understanding of midges and the viruses they may carry, helping us prepare for any possible future emerging risks through improved surveillance and knowledge.”

Co-author Dr Joseph Hughes added: “What we found is the tip of the iceberg in terms of discovering new viruses. With an estimated 5.5 million insect species on Earth, there are likely to be several million more insect viruses to be discovered. What we are seeing globally, due to several factors including climate change, is the movement of virus vectors – or carriers – to new regions.

“Our research is important because the emergence of SBV in Europe, which is transmitted by biting midges, and the incursion of multiple strains of bluetongue virus into Europe, means we need to understand more about the diversity of viruses carried by biting midges. By increasing our understanding, we can hopefully be better prepared for viruses that may emerge in the midge population in future.”

Viral metagenomics, the name of the technique used to identify the midge viruses, has been widely presented and accepted within the scientific community as one of the most unbiased methods for the characterisation of viral sequences.

The midges studied were collected at the University of Glasgow’s Scottish Centre for Ecology and the Natural Environment (SCENE), located within the Loch Lomond and Trossachs National Park.

The study, ‘Metaviromics reveals unknown viral diversity in the biting midge Culicoides impunctatus’ is published in Viruses. The study is funded by the Medical Research Council (MRC).