It’s commonly known as the cat parasite and has found itself in the headlines after medication prices recently skyrocketed in America. Now researchers at the University of Glasgow have found a potential new weakness in the toxoplasmosis-causing parasite, potentially paving the way for new drug development for the disease. 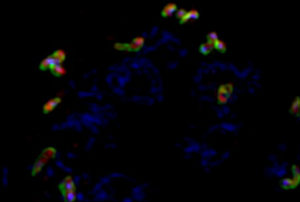 ‌‌In new a study, published today in PLOS Pathogens, scientists at the University of Glasgow’s Wellcome Centre for Molecular Parasitology have identified a key enzyme in the Toxoplasma parasite that is crucial for its survival, and may also be a potential new drug target.

Toxoplasmosis is a disease caused by the Toxoplasma parasite. It is generally transmitted through undercooked meat, soil, or from contact with cat faeces. Although it is thought that up to 33% of the population in the UK carry a dormant form of the parasite, symptoms of infection in healthy adults generally go unnoticed.

In 2015 one of the main drug treatments for the disease, Daraprim, hit the headlines in America after Turing Pharmaceuticals raised the price from $13.50 a tablet to $750 a tablet. Treatments for toxoplasmosis often have toxic side effects, while there are no current drugs available to clear out the dormant form of the parasite.

Now, University of Glasgow researchers have highlighted the importance of thioredoxins – enzymes uniquely essential for the Toxoplasma parasite’s survival. They are currently working with industry partners to create new drugs which would effectively target this enzyme and kill the parasite.

Dr. Sheiner, from the University’s Wellcome Centre for Molecular Parasitology, said: “More and more studies highlight the parasite’s sensitivity to redox imbalance – a key function of the enzyme we have studied. Targeting the thioredoxin enzyme may make them vulnerable at stages of their life that are important for infection and dissemination. Finding enzymes in the parasite that that we can target, and that don’t influence the human host, unravels this potentially deadly parasite’s Achilles’ heel.”

The Toxoplasma parasite is also an important experimental model used to learn about the biology of the parasites that cause malaria, and the team are hopeful that their work will be able to be translated to the malaria parasite too.

Dr. Sheiner said: “Our original interest in this research was not in drug discovery, rather we are excited to learn about how parasites work and how evolution provided them with special tools to serve their parasitic life style. But, as in this case, we are obviously very happy if we stumble across promising targets for new drugs.”

Michael Chew, from Wellcome’s Infection and Immunobiology team, said “Around a third of the UK population are thought to carry the Toxoplasma parasite. Normally a dormant parasite, it can lead to serious neurological harm when “awakened” in people with compromised immunity, like HIV patients, or those with an immature immune system, like infants and unborn children. This research is a great example of how basic, discovery science can lead to new drug targets for dangerous diseases.”

‌The study, Two essential Thioredoxins mediate apicoplast biogenesis, protein import, and gene expression in Toxoplasma gondii’ is published in PLOS Pathogens. The work was funded in the UK by Wellcome, by the Royal Society of Edinburgh and by the BBSRC.