Towards a Tobacco-Free Generation: Where Next?

I recently organised an ESRC Festival of Social Science event to share some of my latest research findings, which I hope will be published shortly. The work included an ESRC-funded project on the impacts of smoke-free public places legislation on inequalities in youth smoking uptake in the UK, and other MRC-funded work on the impacts of e-cigarettes on youth smoking.

I was particularly grateful to have an expert panel comprising Sheila Duffy, Chief Executive of ASH Scotland, Professor Shona Hilton, Deputy Director of the MRC/CSO Social and Public Health Sciences Unit, and Professor Sally Haw from the University of Stirling, who contributed a really lively and engaging discussion following on from our findings.

However, I was keen not just to share some of my findings, but also to engage with a wider audience including students, NHS practitioners, policy makers and the public, to see how they responded to the findings and discuss the future of tobacco policy in Scotland. Using live smart phone polling, I was able to gather audience reactions to our research and find out their views on the goal of a tobacco-free generation. In this post I’m going to tell you about some of their reactions to our discussion, based on responses from our audience of almost 30 people (not everyone responded to every question).

Introduction to a Tobacco-Free Generation 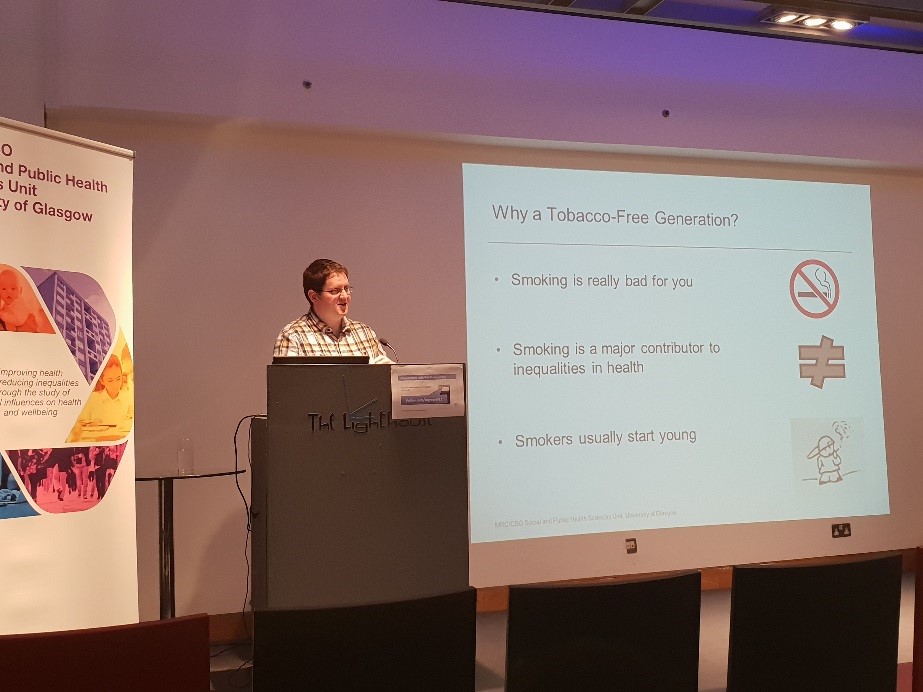 Scotland is one of the only countries in the world to have set a target to raise a tobacco-free generation by 2034. The Scottish Government aims to protect children born since 2013 from tobacco, which means that when they turn 21 (from 2034) they come of age in a Scotland that is tobacco-free. That is, the goal is to reduce smoking prevalence to less than 5% so that cigarettes and smoking will remain largely out of sight and out of mind for this generation and many future generations to come. 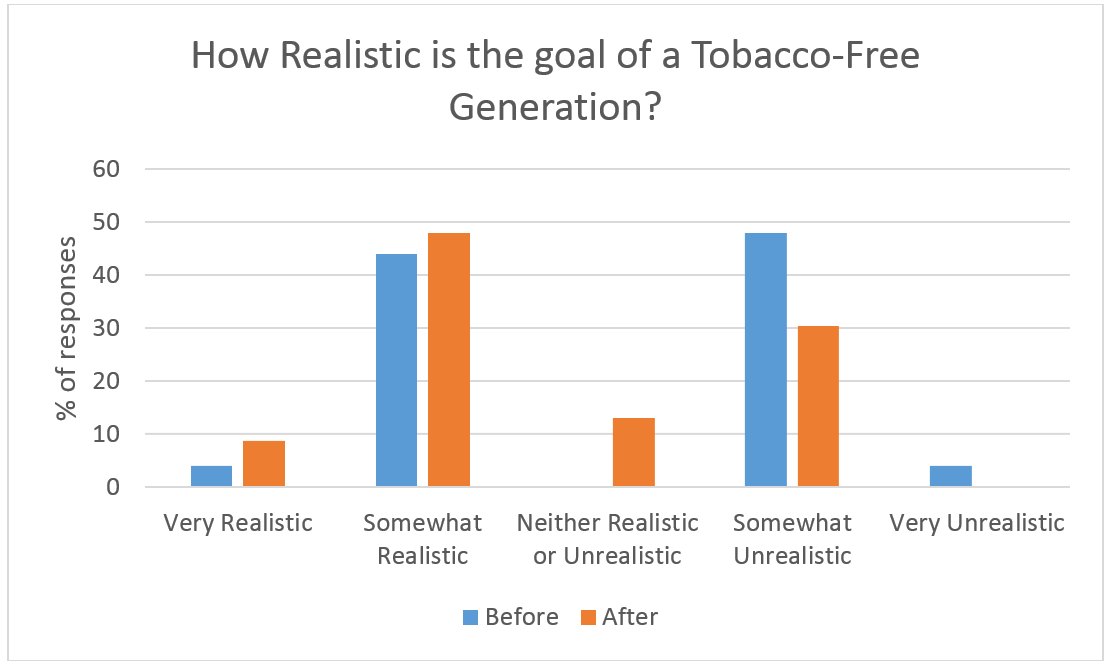 Scotland introduced smoke-free public places legislation in 2006, a year earlier than in England. Our research assessed the impact this legislation had on take-up of smoking by 10-15 year olds in the UK, and on inequalities in take-up between kids from advantaged and disadvantaged backgrounds. We discussed how difficult it can be to single out the effects of any individual policy in a context where there are a lot of policy changes taking place, often simultaneously.

In the case of smoke-free public places, this policy coincided with a rise in the legal age for purchase of cigarettes from 16 to 18 years in 2007 (one year behind the smoke-free legislation in Scotland but in the same year for England and Wales). This means it is particularly difficult to determine which of those policies is responsible for any impact we see on youth smoking around that time.

Nevertheless, we talked about how the effects of any single tobacco policy may not be as important as combinations of different policies that have synergistic effects. I showed the audience our findings on the impacts of the legislation, and asked them which policy they thought was responsible. While more favoured the legal age change than the smoke-free legislation, an over-whelming majority favoured both acting together. 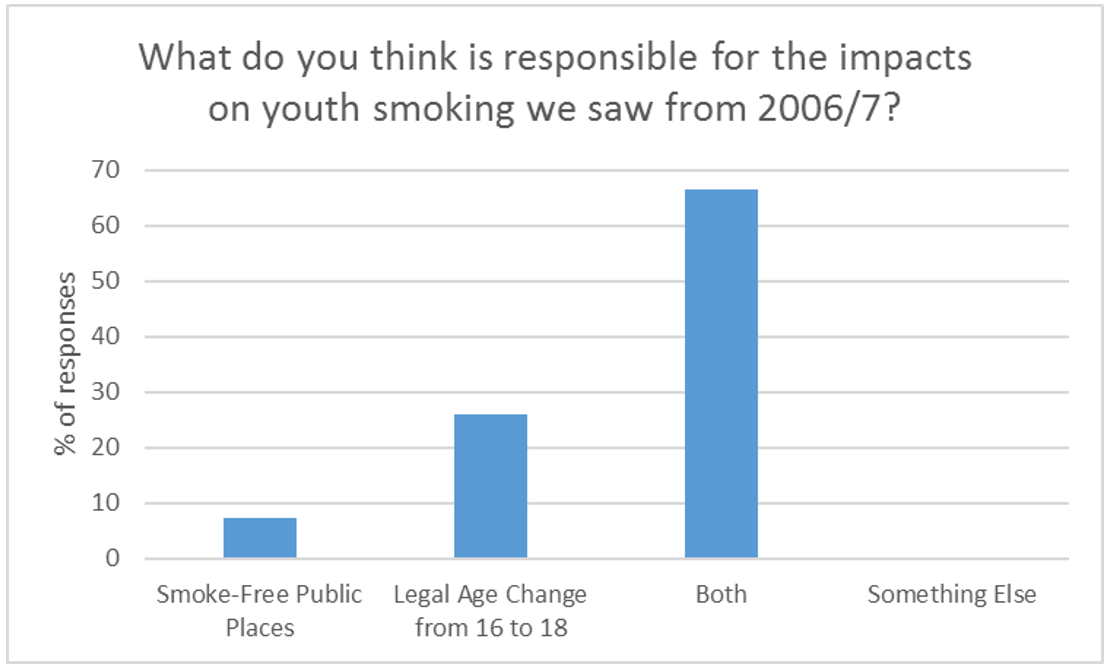 The UK tobacco environment has changed considerably in recent years as increasing numbers of people have been using e-cigarettes since 2011. E-cigarettes have been highly controversial. Switching completely from cigarettes to e-cigarettes is thought to be considerably less harmful than continuing to smoke (with or without e-cigarettes), but neither smoking nor vaping is considered to be the best option.  That said, e-cigarettes may offer an exciting opportunity to reduce the harms associated with addiction to nicotine (which are primarily caused by tobacco smoke). There is also some mixed evidence that e-cigarettes may help some smokers to quit. Enthusiasm for these potential benefits is reasonable and understandable.

We discussed some of the possible reasons to be concerned about rising e-cigarette use. “Safer” is not the same as “safe”.  There are, for example, concerns that e-cigarettes may represent a potential pathway to cigarette use for young people, that they could renormalise smoking behaviour, and that they represent an opportunity for tobacco industry players to attract new markets, exert influence, and develop products and campaigns that are highly appealing to young people.

After listening to this discussion, our audience seemed more aware of the risks posed by e-cigarettes. Nearly half (46%) said e-cigarettes were very good/more good than bad for the goal of a tobacco-free generation, while afterwards this had dropped to 24%.

I think it is important to acknowledge these potential risks, and continue evaluating them against the best available evidence. Understanding and reducing any possible negative impacts of e-cigarettes is an important part of maximising their potential benefits. 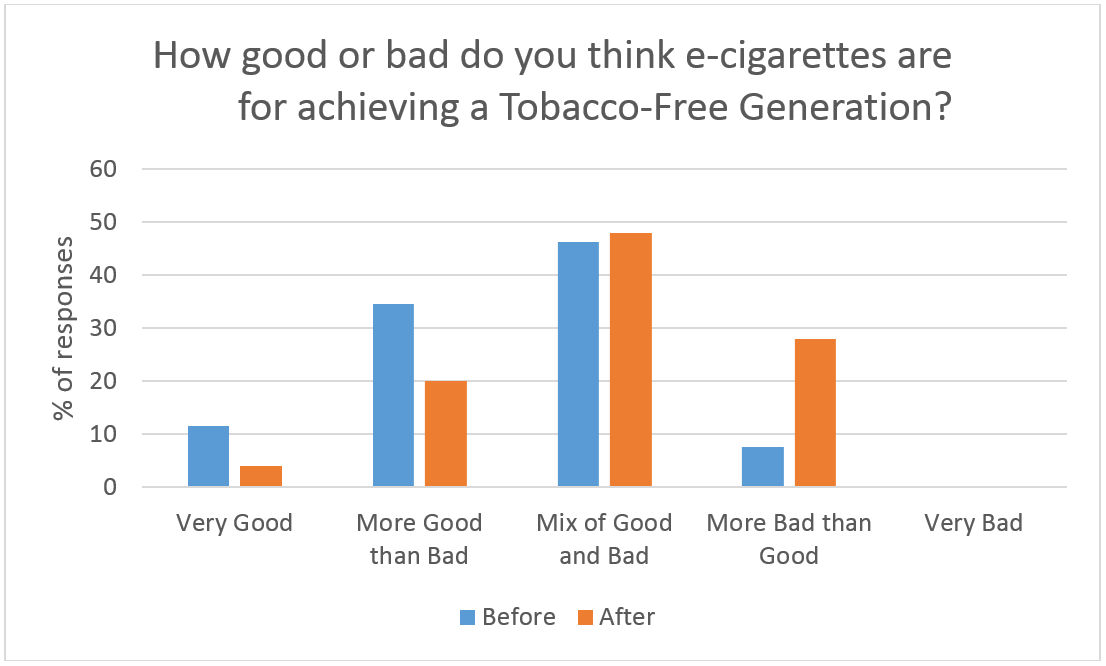 Next steps towards a tobacco-free generation

I asked the audience what they thought were the biggest barriers to a tobacco free generation, and tobacco industry influences were a big concern, particularly after hearing the discussion (44% of responses mentioned this before the debate but 59% after).  I then asked them what they thought were the next big steps needed. Below I’ve roughly grouped their suggestions and responses into five main themes. 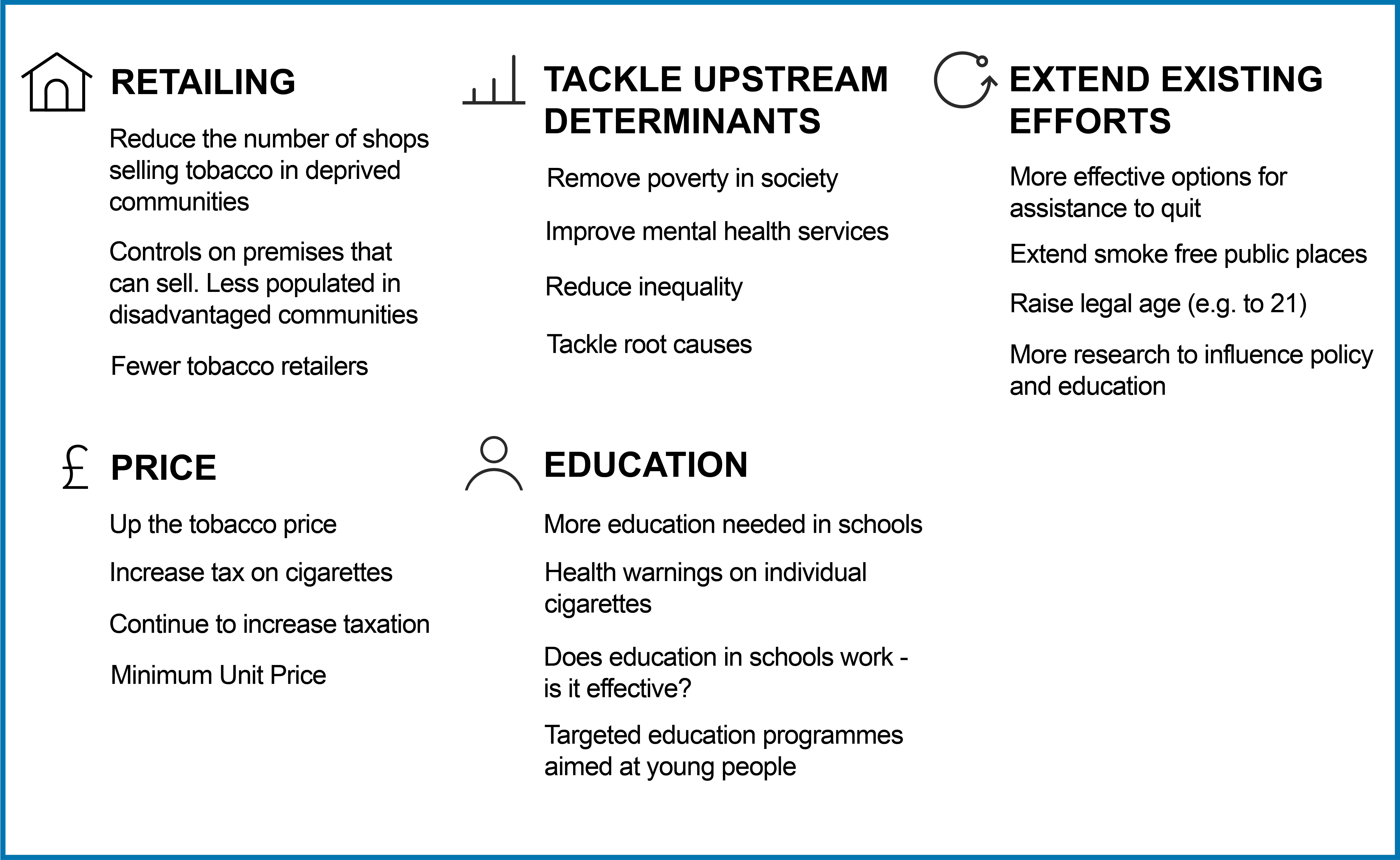 Interesting suggestions here, though I think there are good reasons to be dubious about the effectiveness of education efforts.

A tobacco-free generation is a goal I think we can realistically aspire to, and I hope my ongoing research can contribute in a small way to highlighting opportunities and challenges in relation to this worthwhile goal.