Between 1995 and 2005, just nine African films were shown in UK cinemas on general release. Since 2006, the Africa in Motion Film Festival, founded by the University of Glasgow’s Dr Lizelle Bisschoff, has introduced British audiences to the diversity of African cinema, screening around 600 African films to over 35,000 people.

Dr Bisschoff started the festival alongside her PhD research in African film, having moved from Johannesburg to Edinburgh. Realising the difficulty she had in accessing African films in the UK, she wanted to bring these films to a wider audience – out from the archives ("the BFI had a few VHS tapes you could buy") and onto the big screen.

Edinburgh's Filmhouse cinema hosted the first Africa in Motion in 2006, closely on the heels of the G8 summit at Gleneagles, the Make Poverty History campaign and a renewed interest in hearing first-hand African stories told by African filmmakers. Despite a recommendation to concentrate on films of one genre, or from a particular country, or filmmaker, Dr Bisschoff was keen to highlight the variety of stories, films and genres produced by the African film industry (horror, documentary, musical, drama, comedy, animation and many more).

"Africa in Motion helps Glasgow Film to reach out to new and existing audiences who are interested in films from Africa and with their varied programme from documentaries to family films the curated programme offers something for everyone."
Allison Gardner, Programme Director, Glasgow Film Theatre

Diversifying beyond the arthouse

In 2012, Africa in Motion expanded to Glasgow as well as Edinburgh. In recent years, the festival has engaged with the African community in Scotland, diversifying into events such as dine-and-view evenings that combine screenings with the chance to eat food from Eritrea, Egypt and other countries. The festival hosts events in different spaces such as community centres, libraries, restaurants and art schools, making use of a mobile cinema in a van to bring the latest Nollywood hits from Nigeria to community and women’s groups. Africa in Motion brings diverse communities together and has a high proportion of Black, Asian and Minority Ethnic (BAME) audiences, compared to the national population. (In Scotland, 4 per cent of the population defined themselves as BAME in the 2011 census, while Africa in Motion’s audience is 29% non-white.) 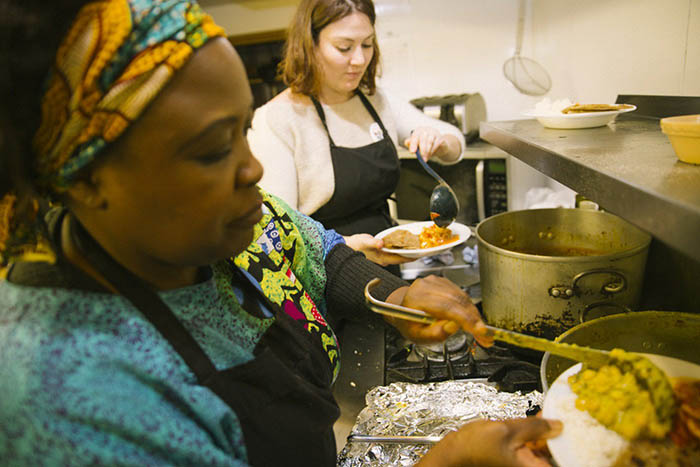 Not only does the festival strive to be diverse in its audiences and in its programming, the team are working to ensure the festival curators include people of colour. As Dr Bisschoff says, there are questions over representation not only on screen but also in the people working behind the scenes. Through mentoring and traineeship schemes funded by Heritage Lottery Fund, the British Film Institute and Young Start, the festival has brought more people of colour in to curate the festival programme. Creative Scotland and the British Film Institute have hailed Africa in Motion as a prime example of best practice in diversity and inclusion. In 2014, UNESCO commissioned Dr Bisschoff to contribute to a report establishing guidelines for increased participation of women in the creative industries: Gender Equality: Heritage and Creativity.

"Working with Africa in Motion helps us connect with a more diverse audience, reflects our city more accurately, explores our historical past and produces quality and engaging content for our Public Programme."
Jenny Brownrigg, Exhibitions Director, Glasgow School of Art

As Dr Bisschoff acknowledges, this and the current conversations happening around representation in the film industry through movements such as #TimesUp or #OscarsSoWhite builds on the work of earlier activists such as the Black Audio Film Collective in the 1980s, who questioned how African and Caribbean people were represented in media.

"A major focus of the festival is to bring in more people of colour, to integrate with African communities, just because we live in a world where now the question about white people talking on behalf of other people is just not acceptable anymore."
Dr Lizelle Bisschoff

The small nature of the festival, which attracts between 5000-6000 visitors each year, is one of its strengths. Audiences gain direct access to the filmmakers showing at the festival. Around 20 African filmmakers attend each year, to discuss their work and to share challenges and experiences of filmmaking with other African and Scottish filmmakers.

"Africa in Motion is a great platform for African filmmakers, the festival offers exposure to young, emerging and established film makers to share with the world the works of their creative juices as well as acting as a window that sheds in light, illuminating different cultures and societies in Africa, giving filmmakers much-needed exposure with the outside world. The festival also offers the attendants a chance to meet, socialize and exchange ideas with people from different cultures and disciplines."
Allan Mwaniki, Kenyan filmmaker

Africa in Motion is part of a network of many niche film festivals in Scotland, including SQIFF (Scottish Queer International Film Festival), Screenplay in the Shetland Islands and Document Human Rights Film Festival. This allows for cross-promotion and collaboration to reach wider audiences.

The festival also works in partnership with other African film festivals across the UK, such as London's Film Africa, Bristol's Afrika Eye, Watch Africa in Wales and the Cambridge African Film Festival, widening the distribution network for African films across the UK. Dr Bisschoff has guest curated African film strands as part of the British Film Institute’s Science Fiction, Love and Black Star seasons (2014-2016), enabling more and more audiences to access African cinema. 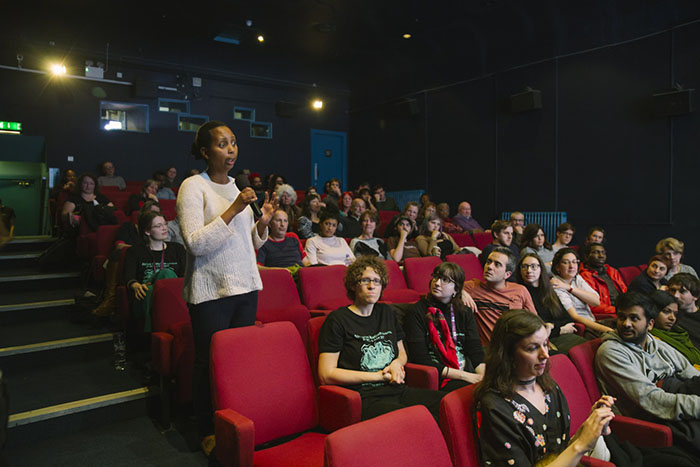 "… the best kind of response that you could get is when people express a sense of discovery. So it's when they would write something or tell us something like I would never knew that these films existed, or I never knew about this piece of history, or I didn't know much about this country, or I didn't even know that there were these films being made. It's that sense of discovery that people express and so I guess that is the most satisfying response that you can get from audience members."
Dr Lizelle Bisschoff

The collaboration with other African film festivals in the UK grew out of Dr Bisschoff’s research (in partnership with Professor David Murphy from the University of Stirling) into lost classics in African cinema, funded through a small grant from the Arts and Humanities Research Council (AHRC) almost a decade ago.

During the original research Dr Bisschoff and Professor Murphy realised the width and breath of classic African cinema, which was unknown to them as they started work on recovering classic African films. This research was published in 2014: Africa's Lost Classics: New Histories of African Cinema (Legenda, 2014).

In 2017 the AHRC provided further funding of £75k to enable Dr Bisschoff to bring a number of screenings of 'lost African film classics' to UK audiences. The screenings were complemented by public and educational events and activities to contextualise the films for audiences, in collaboration with the five UK African film festivals - Africa in Motion in Scotland, Film Africa in London, Afrika Eye in Bristol, Watch-Africa in Cardiff, and the Cambridge African Film Festival.

"Our ongoing work on recovering neglected and forgotten African film classics has always had innovation and public impact at its core, with a direct link between our research and publications on the one hand, and public engagement and knowledge exchange on the other."
Dr Lizelle Bisschoff 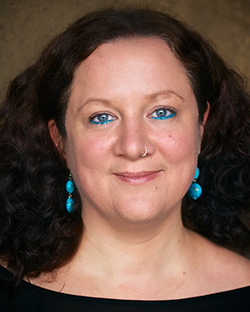 In 2006, she founded the Africa in Motion film festival, inspired by a desire to combine her academic research with practical work to make African cinema more accessible to British audiences. She is Principal Investigator on the AHRC-funded project "Lost African Classics in Context".