For the 3rd year running, the UNESCO Chair team organised a series of workshops, presentations and performances at the Solas Festival in Perth as part of Refugee Festival Scotland 2019.

For more information about the festival in general, please visit the Solas website: http://www.solasfestival.co.uk/

First up was Professor Alison Phipps. Decolonising is the word of the moment. For those seeking refuge and seeking to integrate their ways of life with the ways of life of others it offers a mode of hospitality. It can be freeing, it can be uncomfortable, it can be physical. It is emotional. And it is a journey. In this Third UNESCO RILA lecture at Solas Alison Phipps presented her new book Decolonising Multilingualism. The book is a poetic, activists academic exploration of her attempts at decolonising and her manifesto for decolonising multilingualism. 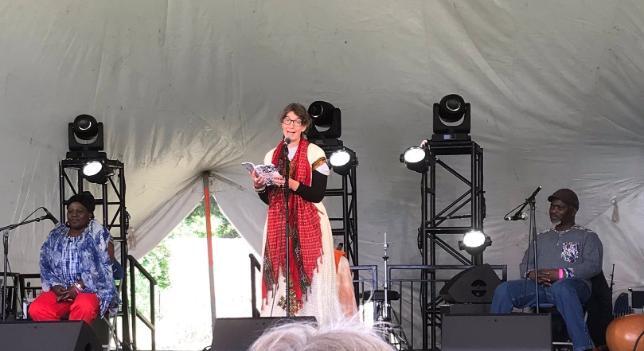 Her second appearance is on a panel, talking about the following question: What journey has Scotland been on since the founding of a modern Scottish Parliament? Drawing on a new book, Scotland the brave? Twenty years of change and the future of the nation, this panel looked in particular at the people's story - and where the country might be going next in a world challenged by climate change, populism, threats to democracy and many other challenges. 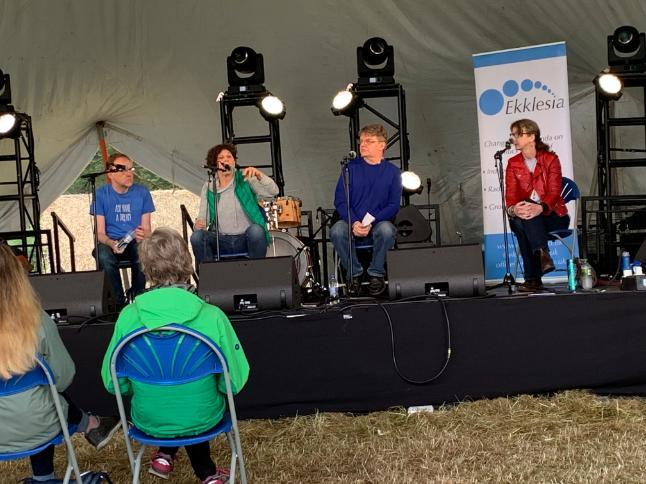 Alison made her third entry in a creative conversation with Fergus McNeill, around criminal justice, migration and integration.

New this year was a series of podcasts, recorded LIVE at the festival, by Refugee Voices Scotland. Those and previous recordings can be found here. Below Ken Gordon is interviewing actor Fawaz Raif. His other interviewee was musician Farzane Zamen. 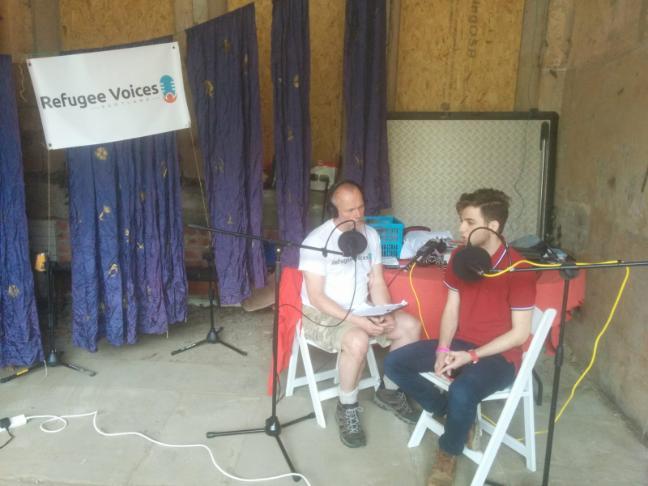 We teamed up with the Scottish Refugee Council’s Life after Detention group and Ice and Fire’s Actors for Human Rights, to bring you their Detention Dialogues. Poignant stories from New Scots: a real eye-opener. Sarah McCardy, Steven Ritchie and Chris Watson performed several times on both the Saturday and the Sunday. 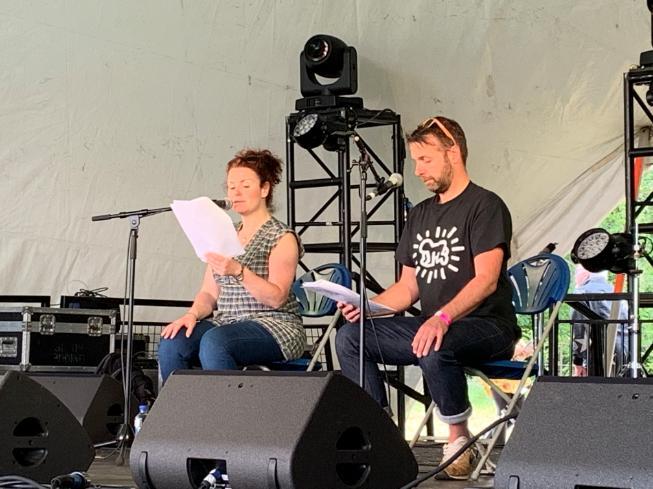 From our team of Affiliate Artists we hosted a participatory photography workshop by Pieter van der Houwen. Very well attended, lots of relevant questions from the audience.

I.D. Campbell took participants on a portrait drawing workshop for all ages and levels of experiences. With the help of a nifty worksheet, Iain brought out the best in every (future) artist, drawing copies of one of his previous painting subjects. 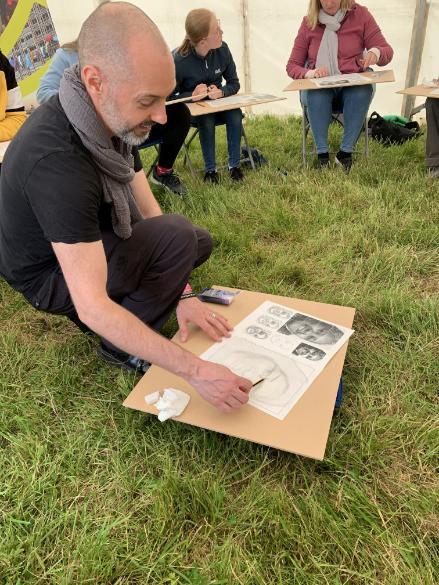 Martha Orbach created a workshop around plants and printmaking. How do plants help us build a life? How does printmaking create shared habitats? She answered these and more questions in her stories from refugee gardening and print projects. Participants were then invited to create a papercut landscape reflecting the diverse environments we call home. 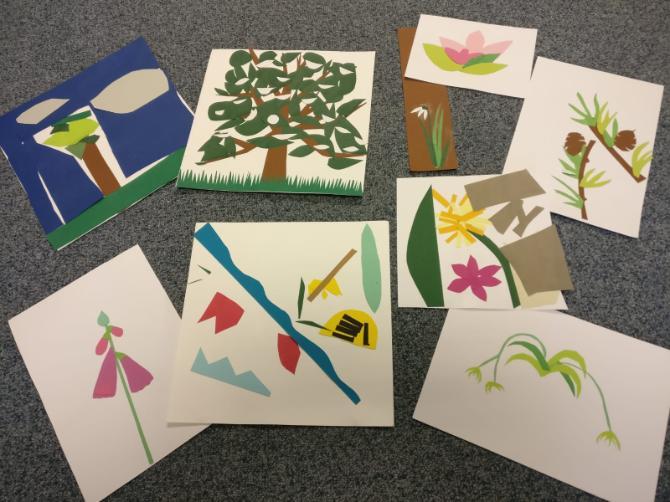 Languages were also represented. Giovanna Fassetta, Esa Aldegheri and Nihaya Jaber introduced the audience to their new online Arabic course, created in collaboration with the Arabic Centre of the Islamic University of Gaza. A taster session around colours made sure everybody left the tent with some newly leart Arabic under their belt. 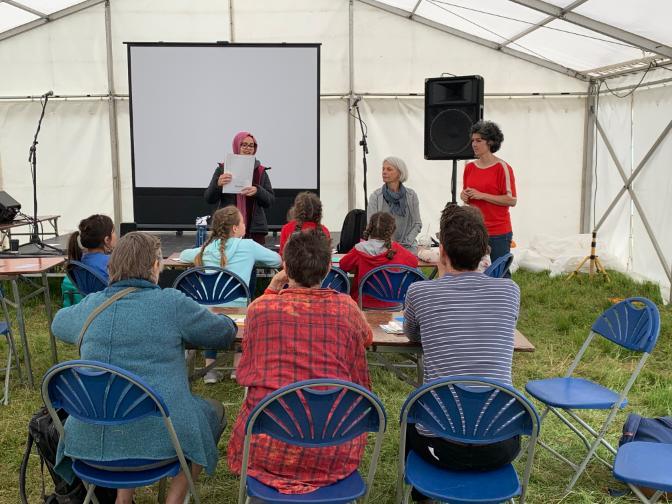 Our own Artists in Residence hosted workshops and activities for children and young people this year. Tawona Sitholé led a colouring activities for the little ones and also presented an interactive 3D storytelling session. 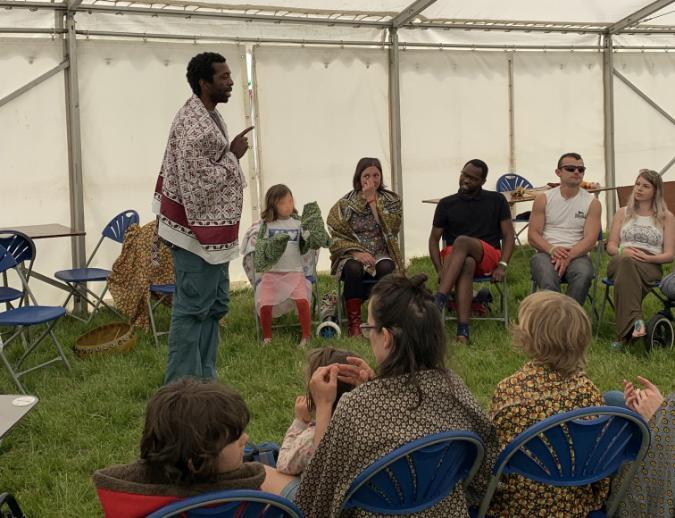 Gameli Tordzro was back with his hugely popular story-telling session, to teach us wisdom from West-Africa. Sidekick Naa Densua Tordzro joined him for this session with Ghanaian song. 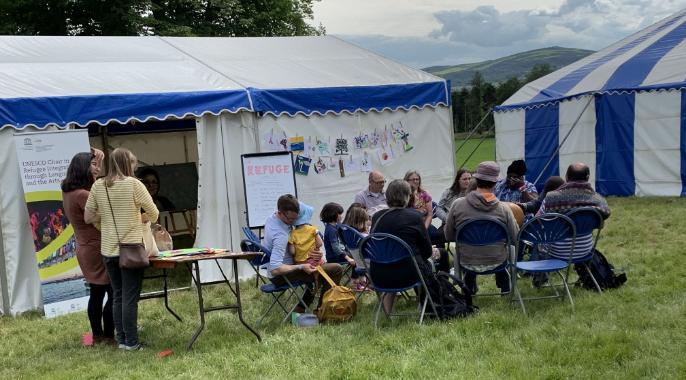 From Liverpool, we were honoured to welcome Prof Charles Forsdick.

Abstract of his talk: Haiti is often dismissed as the poorest country in the Western Hemisphere and one of the poorest countries in the Global South. Charles Forsdick – author of a recent biography of the leader of the Haitian Revolution, Toussaint Louverture – looks behind the headlines to explore the history of the nation that was the first Latin American country to declare independence in 1804. Focusing on the social, political and economic issues that continue to challenge Haiti today, the talk reflects on this unfinished revolution. 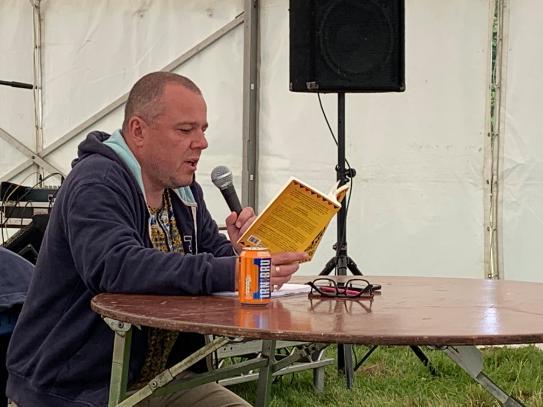 He also presented the Anti-Slavery Knowledge Network, together with Lennon Mishi. The Global Slavery Index estimates that there are 46 million enslaved people worldwide today. The UN’s Sustainable Development Goals include the target of ending slavery by 2030. The Anti-Slavery Knowledge Network works with a range of partners across sub-Saharan Africa to address modern slavery as a core development challenge. Together they demonstrate that participatory arts-based strategies, rooted in heritage, can allow Global South communities to play a central role in tackling contemporary slavery. Lennon Mishi and Charles Forsdick – two of the network's members – gave an overview of this work and the challenges it entails.

In the stables we hosted the AHRC Translating Cultures Exhibition

2019 marks the conclusion of the Arts and Humanities Research Council ‘Translating Cultures’ theme, which has supported researchers in the UK and internationally to explore the role of translation, understood in its broadest sense, across a variety of fields. This exhibition gathers together a number of ‘objects in translation’ and ‘objects of translation’ which have been identified by ‘Translating Cultures’ researchers to illustrate their research questions or practice. The exhibition is a prelude to a more extensive online exhibition and glossary which will reflect outputs from over 100 projects. 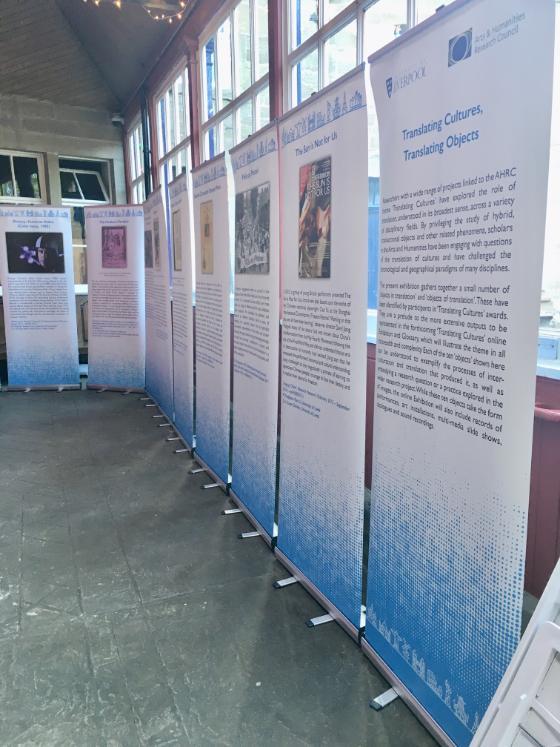 More info about the festival at http://www.solasfestival.co.uk/ 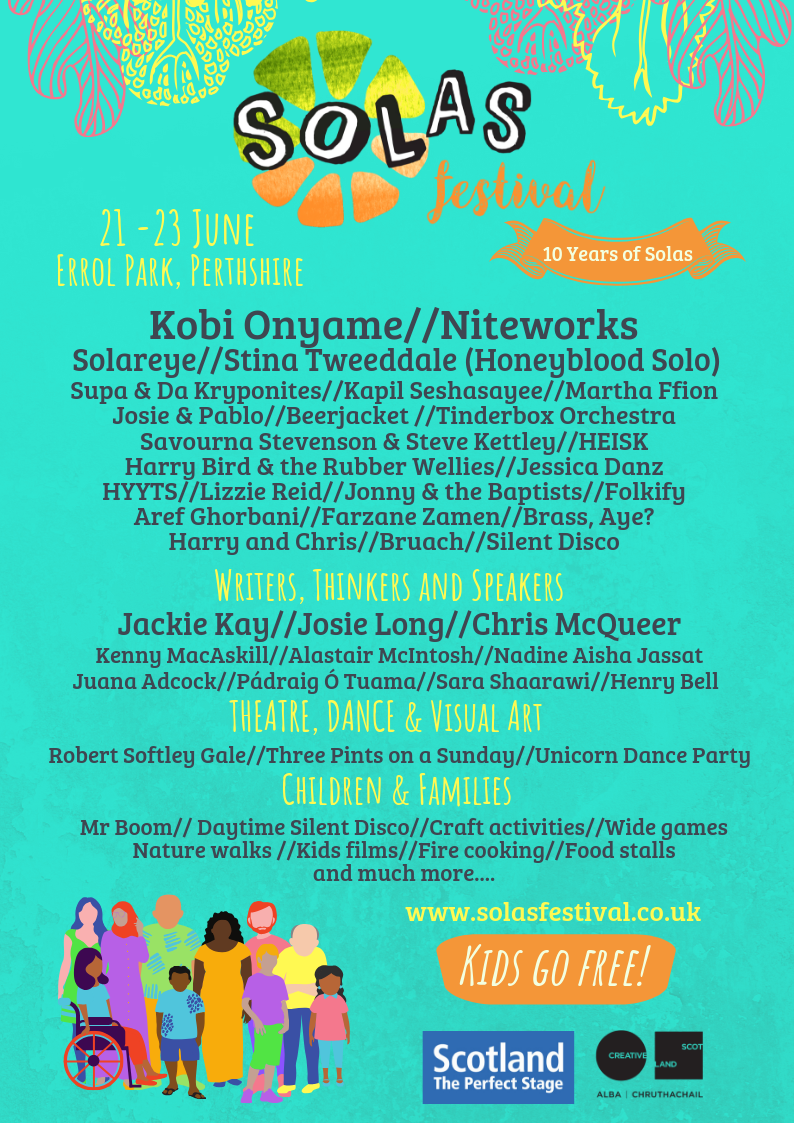