Trade in old and rare Scotch whisky has grown in recent years, with UK auction sales of over £40 million in 2018 alone.

A significant threat to this market is the sale of counterfeit single malt whiskies with purported distillation years of the 19th- to the mid-20th century. Such fraudulent sales not only have significant financial consequences for buyers, but have a knock-on effect on the reputation of auction houses, retailers, distillers, and brand owners.

While the whisky industry has an array of analytical techniques to identify counterfeit products, these are unable to identify the true year of distillation of these early malt whiskies. 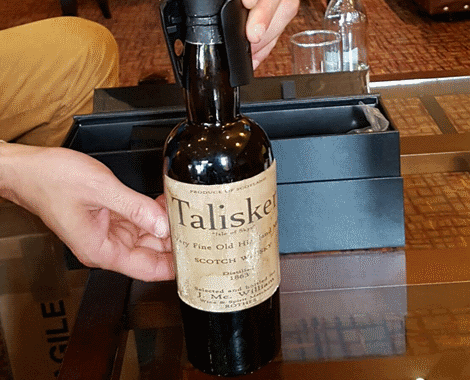 Whisky described as Talisker distilled in 1863. The contents were not Talisker and the distillation was actually 2005 or later.

In a paper published in Radiocarbon, the SUERC Radiocarbon Laboratory reveal the techniques they employ to sample and measure such purported rare whiskies.

The laboratory has created a bespoke whisky calibration curve from known age single malt whiskies which, exploiting the rapid changes in carbon-14 levels caused by atmospheric nuclear weapons testing in the mid-20th century, can allow the year of distillation to be identified to within 1-3 years for certain periods.

Further details, including examples of the analysis of both fake and genuine samples, can be found in the published paper at Radiocarbon.