Many animal species suffer reduced reproductive success in urban habitats, despite wide-spread supplementation of breeding and feeding opportunities. In some years, the breeding success of city birds is devastatingly low.

Biologists have now shown conclusively that in urban blue tits, reduced breeding success is linked to poor nestling diet and in particular to scarcity of caterpillars, their preferred nestling food.

The research adds to growing concerns that urban environments can become ecological traps for urban-dwelling species. The increasingly rapid process of urbanisation has now placed more than 50% of the human population in cities. Birds and other species can be attracted to these habitats by human food and shelter, but these benefits can be offset by major ecological deficits, as now shown for blue tits. 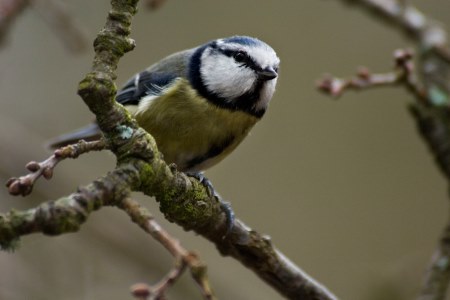 Although blue tits are widespread songbirds that appear to do well, their breeding failure in cities can be severe. In 2015, blue tit parents fledged less than one chick per nest in city parks in Glasgow, compared to more than five chicks per nest in the Loch Lomond National Park. Suburban sites showed intermediate breeding success. Researchers from the University of Glasgow and NERC’s LSMSF Facility (National Environment Research Council’s Life Sciences Mass Spectrometry Facility) at SUERC (Scottish Universities Environmental Research Centre) used a holistic study approach to reveal the reasons for this drastically low breeding success. Their research is published in the journal Scientific Reports.

The researchers counted caterpillars, other insects and spiders on the trees where blue tits forage. They found that caterpillars were greatly reduced in the city and did not show the typical seasonal peak on which chicks can thrive.

Filming the parents as they entered the nest boxes, the researchers discovered that the more caterpillars the parents delivered, the higher the fledging success of their young. However, although urban parents worked harder for each of their offspring, they provisioned far fewer caterpillars than forest birds. Instead, urban parents brought alternative foods, including peanut granules that the chicks were unable to digest. Dietary differences were also confirmed by analyses of stable isotopes in blood and egg samples of blue tits, which give clues to the food the birds had consumed.

Dr Barbara Helm, of the University of Glasgow’s Institute of Biodiversity, Animal Health and Comparative Medicine, said: “These losses of birds’ breeding success are avoidable if we take better care of urban biodiversity. Not all breeding seasons are as bad as 2015, but if conditions become tough, urban birds are hit much harder than birds in natural forests. Increasing caterpillar numbers will directly benefit birds in our cities”.

Dr Davide Dominoni, now at the Netherlands Institute of Ecology, added: “We should increase the birds’ provisioning of caterpillars from moths and butterflies, for example by prioritising native plant species that the caterpillars like,including oaks, and by reducing use of insecticides.”

The findings of this study make the strongest case to date that urban nestlings are not receiving a suitable diet. So far, these results have been based on single study sites in Scotland. More research is needed to confirm the reported patterns for other cities in the world. But the present study provides strong integrative evidence that diet is an important limiting factor for urban populations of this and potentially other species.

Read the paper at Scientific Reports.