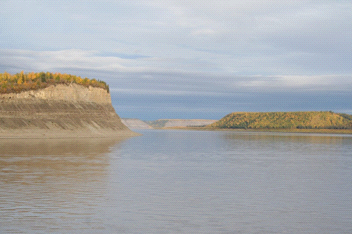 Almost twice as much carbon is stored in Arctic soil, as frozen plant remains, as in the atmosphere. If the soils warm, this carbon can be released as greenhouse gases (carbon dioxide, CO2, and methane) to the atmosphere, and contribute to warming of Earth’s climate. However, some of the soil organic carbon can be eroded and transferred to rivers. If it is not converted to CO2 during river transport it can eventually reach the sea and become buried in marine sediments. In this case, the carbon can be locked away for millions of years. Knowing the extent to which this happens is important as it is part of the global carbon cycle, and for predicting the possible effects of northern soil warming on climate. Until now the fate of this eroded soil carbon has remained poorly understood.

The researchers collected sediment samples from one of the largest rivers in the Arctic, the Mackenzie River of Canada, and used radiocarbon, stable carbon and nitrogen to work out that most of the eroded organic carbon ranged from recent to about 8,000 years old, with smaller amounts from very old carbon from rocks. The amount of carbon eroded from soils and transported by the Mackenzie River was calculated to be 2.2 million tonnes of carbon per year. Sediments collected from a core offshore indicate that the terrestrial carbon is rapidly buried in the sediments of the Arctic Ocean. This process will contribute to stabilising the Earth’s CO2 levels over thousands of years, but is not enough to counter CO2 from burning fossil fuels. It is also about 10-20 times too slow to offset the predicted release of CO2 if the frozen soils thaw over the next 100 years.

The research was supported by the Natural Environment Research Council UK, WHOI Arctic Research Initiative, an Early Career Research Grant by the British Society for Geomorphology, a Royal Society University Fellowship, and a grant from the National Science Foundation (OCE-0928582).