Local innovation rather than population expansion explains the appearance of new technologies in Eurasia more than 300,000 years ago.

The analysis of artifacts from a 325,000-year-old site in Armenia shows that human technological innovation occurred intermittently throughout the Old World, rather than spreading from a single point of origin, as previously thought.

The study, published today in the journal Science, examines thousands of stone artifacts retrieved from Nor Geghi 1, a unique site preserved between two lava flows dated to 200,000–400,000 years ago. Layers of floodplain sediments and an ancient soil found between these lava flows contain the archaeological material. The dating of volcanic ash found within the sediments and detailed study of the sediments themselves allowed researchers to correlate the stone tools with a period between 325,000 and 335,000 years ago when the Earth’s climate was similar to today’s. 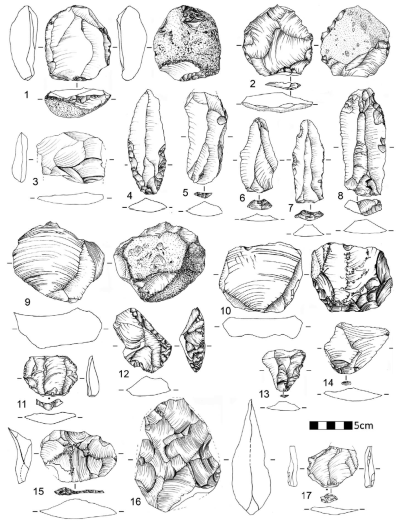 The stone tools provide early evidence for the simultaneous use of two distinct technologies: biface technology, commonly associated with hand axe production during the Lower Paleolithic, and Levallois technology, a stone tool production method typically attributed to the Middle Stone Age in Africa and the Middle Paleolithic in Eurasia. Traditionally, Archaeologists use the development of Levallois technology and the disappearance of biface technology to mark the transition from the Lower to the Middle Paleolithic roughly 300,000 years ago.

“The combination of these different technologies in one place suggests that 325,000 years ago, people at the site were innovative,” says Dr Darren Mark, Senior Research Fellow and Head of the NERC Argon Isotope Facility. Moreover, the chemical analysis of several hundred obsidian artifacts shows that humans at the site utilized obsidian outcrops from as far away as 120 kilometres (approximately 75 miles), suggesting they must also have been capable of exploiting large, environmentally diverse territories.

It is the novel combination of the shaping and flaking systems that distinguishes Levallois from other technologies, and highlights its evolutionary relationship to biface technology. Based on comparisons of archaeological data from sites in Africa, the Middle East, and Europe, the study also demonstrates that this evolution was gradual and intermittent, and that it occurred independently within different human populations who shared a common technological ancestry, says Adler (lead author, University of Connecticut). In other words Levallois technology evolved out of pre-existing biface technology in different places at different times.

This conclusion challenges the view held by some Archaeologists that technological change resulted from population change during this period. “If I were to take all the artifacts from the site and show them to an archaeologist, they would immediately begin to categorize them into chronologically distinct groups,” Adler said. In reality, the artifacts found at Nor Geghi 1 reflect the technological flexibility and variability of a single population during a period of profound human behavioral and biological change. These results highlight the antiquity of the human capacity for innovation.

This study is the first to present data from Nor Geghi 1, and the research conducted at the site is a collaboration between the University of Connecticut, Yerevan State University, The Scottish Universities Environmental Research Centre and the Institute of Archaeology and Ethnography, Yerevan. Intellectual contributions to this research were made by an international team of collaborators from Armenia, the United Kingdom, Canada, Spain, Holland, Germany, Ireland, and the United States.

Read the full results of the study in Science