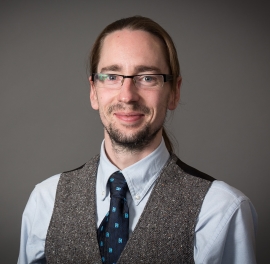 Our former postdoctoral Isotope Apprentice - Dr. Craig Barrie - has been awarded the prestigious Wollaston Fund (2014) by the Geological Society of London.

This fund is awarded by the Society to early-career researchers within ten years of the award of their first degree in geoscience or related subject, and is based on the quality of their published works. Craig completed his first degree in Earth Sciences at the University of Glasgow (2001-05) where he took a keen interest in mineralogy and was awarded the Mineralogical Society undergraduate award. He then joined the Department of Earth & Ocean Sciences at the University of Liverpool (2005-08) to undertake a PhD project with Dr. Alan Boyle & Prof. Dave Prior working on the microstructure of sulphide minerals in ore deposits. A NERC Facilities grant to work at the Isotope Community Support Facility facilitated S isotope work with Professor Adrian Boyce during his PhD. His research involved collaborations with SUERC, Imperial College, James Cook University, ANU, Adelaide, and with Industry, and resulted in eleven articles being published from the PhD. One of these led to Craig being awarded the Journal of the Geological Society of London’s ‘Young Author of the Year’ 2009 for his novel study on ore formation using colloform mineral textures in the Galmoy Zn deposit in Ireland (Galmoy colloform paper). This work brought new insight to the extraordinary and dynamic evolution of the mineralising system – 350Myrs ago!

Upon completing his PhD, Craig briefly took up a teaching position at the University of St. Andrews before moving back to Glasgow, to take up an Isotope Apprenticeship position with the ICSF with Adrian. He became involved in a wide range range of geological & environmental projects, and learned a tremendous amount regarding the equipment, through day-to-day running of the systes, and being involved in hands-on maintenance. Indeed Craig ended up playing a key role in the commissioning of our £300k Thermo MAT253 mass spectrometer in 2010/11. His abilities with a breadth of stable isotope systems led to him being poached Isoprime, one of the UK’s leading mass spectrometer companies, to become one of their technical specialists working in applications and sales and dealing with customers across the globe. As of March 2014 Dr. Barrie transferred from Isoprime to the sister company in the USA, Elementar Americas Inc., to take up the new role of IRMS Product Manager – Petroleum & Environment. Craig has also found time to have twenty articles published or in press with a further six currently in review! And to marry Gemma last year!