A new project called Runaways London will bring poets and artists together to try to tell and reimage some of the stories of London's runaway slaves.

Runaway London is led by literature charity Spread the Word in partnership with the University of Glasgow and Ink Sweat & Tears Press.

The new poetry and artworks will reimage the stories of these freedom-seekers in 17th and 18th Century London.

Dr Peggy Brunache, Lecturer in the History of Atlantic Slavery & Director of the Beniba Centre for Slavery Studies, University of Glasgow, said: “The history of Britain and slavery isn’t just about the accumulation of wealth via the brutal enslavement of Africans and racialised terror that occurred thousands of miles away in the Caribbean. It’s also about how the enslaved were forced to live and work here on British soil and courageously resisted their captivity at every turn possible, seeking freedom. That Black history is British history. It belongs to all of us.”

While many people view the trade in enslaved people as something which took place along the so-called ‘Middle Passage’ between Africa and the Americas, between the 1650s and 1780s many hundreds of enslaved people were brought to London and the UK. Most were African although a significant minority were South Asian. What’s even less well-known is that while in the capital some attempted to and were successful in escaping.

One of the ways we are aware of the existence of these enslaved Londoners is through many hundreds of short advertisements placed in newspapers by masters and enslavers who described and offered rewards for the capture and return of enslaved people who had escaped.

Often called ‘runaway slave’ advertisements, they are in many cases the only surviving record we have of a particular enslaved person, but even then they may tell us very little and all through the eyes of those who enslaved and pursued them.

Sometimes we don’t even know the name of the freedom-seeker. We might learn whether they were of African or South Asian descent, how well they spoke English, the clothes they had been wearing when they escaped, and in some cases whether they were scarred by slave brands or had been forced to wear metal slave collars around their necks. Many advertisements give the enslaved person’s age, from which we know that the average age of an escapee was just 16 years old.

It is all that we don’t know about London’s freedom seekers that has led to the development of Runaways London.

Working with research by University of Glasgow’s Runaway Slaves in Britain project, a team of young poets and artists of African and South Asian heritage have developed a series of poems and artworks responding to these advertisements.

Together they have reimagined the stories of London’s runaways, showing African and South Asian people to have been present in London, and that despite some of them little more than children, they dared to challenge their enslavers and run away into the City of London, eager to find better and freer lives. 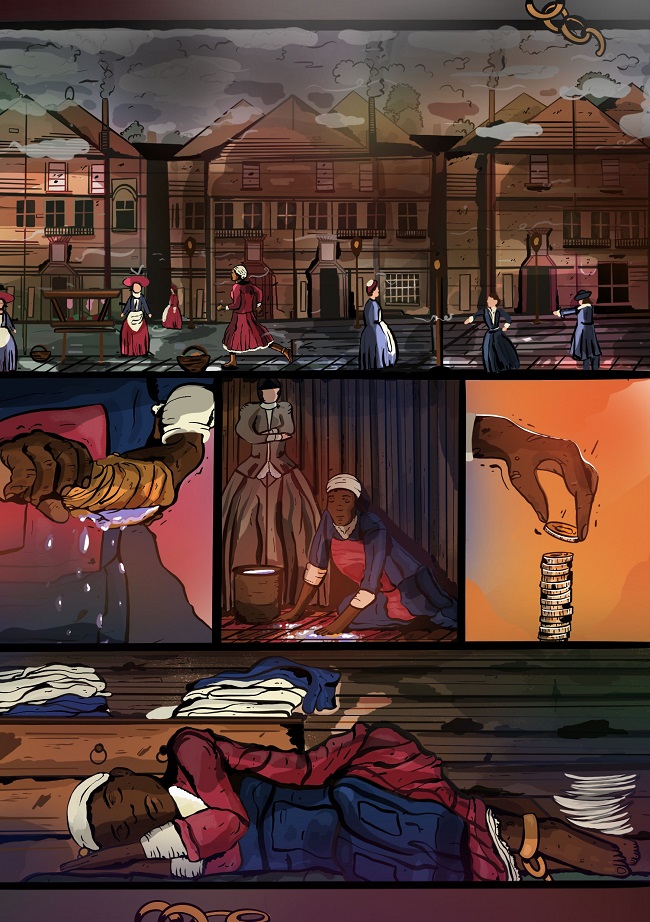 Professor Simon P. Newman, Sir Denis Brogan Professor of American History (Emeritus), University of Glasgow said: “Slavery was very different in London, often polite and genteel, with young people dressed in expensive liveries as personal servants who advertised the wealth and success of those who claimed ownership of them.

"But it was still slavery and these people could easily be sent back to the places where enslavement was more savage and violent. Some tried to escape while in London yet we know very little about them. Who were they, where did they come from, what had they experienced, and what kind of home was London for them? These are the questions that inspire the Runaways London project.”

The creative work produced by the poets and artists will be published in an anthology by Ink Sweat & Tears Press, edited by Fahad Al-Amoudi and Kate Birch. The anthology will be launched at an event on 21 October 2021 at the Museum of London Docklands alongside a film of the commissioned work and a resource pack for young people. The book, the film, the resource pack and a recording of the launch event will be made available for free online.

About Spread the Word

Spread the Word is London’s writer development agency and a National Portfolio client of Arts Council England. It is funded to help London’s writers make their mark on the page, the screen and in the world and builds strategic partnerships to foster a literature ecology which reflects the cultural diversity of contemporary Britain. Spread the Word has a national and international reputation for initiating change-making research and developing programmes for writers that have equity and social justice at their heart. In 2015 it launched, Writing the Future: Black and Asian Writers and Publishers in the UK Market Place. In 2020 it launched Rethinking ‘Diversity’ in Publishing by Dr Anamik Saha and Dr Sandra van Lente, Goldsmiths, University of London, in partnership with The Bookseller and Words of Colour.

About Runaway Slaves in Britain

Runaway Slaves in Britain: bondage, freedom and race in the eighteenth century is a University of Glasgow project led by Professor Simon Newman which includes hundreds of  runaway advertisements, as well as others offering enslaved people for sale, along with supporting materials. Professor Newman is the Sir Denis Brogan Professor of American History (Emeritus), and Honorary Professorial Research Fellow. Joining him on the Runaways London project is Dr. Peggy Brunache, a lecturer in the history of Atlantic slavery and Director of the Beniba Centre for Slavery Studies.

Ink Sweat & Tears: an online poetry and prose web zine run by Kate Birch and edited by the poet Helen Ivory with a small print publishing arm whose pamphlets have been shortlisted for major poetry awards. Fahad Al-Amoudi, editor of the Runaways London anthology, and Desree, who has also lent her expertise to the project, have been part of  the Ink Sweat & Tears editing internship programme.