This collaborative project has brought together a creative team of artists and academics from Glasgow, Exeter and Swansea Metropolitan Universities, Street level Photoworks and Bash Art Creative. We have linked to on-going Red Road Flats projects being delivered in the North of Glasgow, and worked closely with St Martha’s Primary School, Springburn Alive and Kicking Project and Red Road Family Centre in developing a range of workshops and activities, leading to a collaborative public performance involving people from the local area and community choirs.  This community event which took place on 18th May 2013 drew on the stories, images and artefacts of peoples’ lives in the Red Road flats across the four decades of their history.

The community event sought to translate some of the hopes, aspirations and struggles of the changing population, along with meanings of place and offered a performance which literally echoed a tribute and farewell through the skeletal framework of the remaining flats.

A major legacy of the project has been the making of a film documenting the ideas, activities and final event. This was screened at the launch of GRAMNet Film Series 2014-15 programme to an audience of over 100 and inspired a lively debate between the audience and members of the project team.

The team are currently exploring possibility for a screening of the film at local venues where the original workshops and events took place and a reprise/further development of some of the workshop activities at St Martha’s Primary School.

Who we are: the collaborative team

Michael Given: Archaeology, University of Glasgow 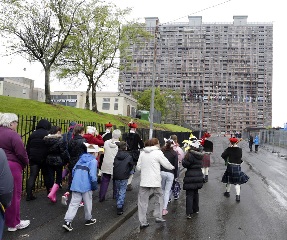 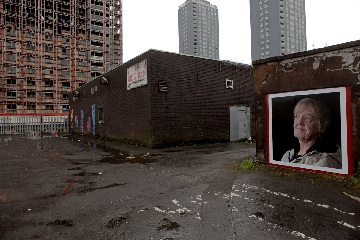