On Friday 30th September 2016, a group of researchers from the BHF Centre of Research Excellence lead by Jonathan Noonan and Pasquale Maffia portrayed the importance of studying cardiovascular disease running a ‘Nanomate science stall’ with hands-on activities at Explorathon Extravaganza. For the third year running, the Glasgow Science Centre opened its doors for free for one night only, for the largest ever celebration for European Researchers’ Night across Scotland. An extravaganza of discovery, debate and entertainment where the public was encouraged to interact and engage with researchers.

The team aim to investigate how nanoparticles could be used to improve the diagnosis and treatment of vascular inflammation.

Both children and adults were invited to help experts from the Universities of Glasgow and Strathclyde to hunt down 'bad' cells in a computer game and create their very own immune cell to take home with them. The 'Nanomate' stall interacted with over 400 people, with 8 researchers involved, and over 100 ‘I like it’ stickers on the evaluation boards.

The event is advertised on the following links: 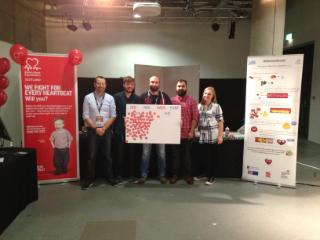