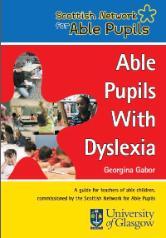 “There is considerable evidence to suggest that when high abilities and learning disabilities appear together, they may cause a special talent”
(Gyarmathy, 2000 p.76).

Defining able pupils with dyslexia is not an easy task. Part of the problem is that many people become involved in working with these children: the psychology profession, the educational profession, even the medical profession, and everyone wants a definition that serves their own
purposes. Able pupils with dyslexia belong to a largely unidentified population, sometimes also referred to as twice exceptional children. Not only do these children often remain unidentified because interest in research in this area has only recently increased, but also because able pupils
with dyslexia can cover their difficulties by their high abilities. At the same time, their difficulties may cover their high abilities making identification, at least with the current methods, challenging.


The process of identification of able pupils with dyslexia is guided by two questions:

Montgomery (2003 p43) is of the opinion that “dyslexia is one of the most common forms of double exceptionality and has serious consequences for bright children”. These are not only educational consequences, but consequences affecting the whole child. Educationally, delays to literacy development can be very damaging for able pupils and can lead to frustration and anger.

In addition, children may develop false belief systems about their abilities which, in the long run, will affect them both socially and emotionally. Once a false belief system develops, it is very difficult to reverse the process, but given enough knowledge about the nature of able pupils with dyslexia, it is not difficult to prevent the damage. An attempt to define what we mean by able pupils with dyslexia for educational purposes, therefore, is crucial as a good working definition can greatly aid the identification and assessment of these children.

Our booklet Able Pupils with Dyslexia is now free to download, please click the link on the right.

I must always have been dyslexic, but I've known about it for only 4 years.

When I was at primary school I knew I was different from the other pupils but I didn't know why.   When I was in primary 1 and 2, I learned to read and write just as well as everybody else, though I do remember finding reading flash cards hard.

But, by primary 4/5 work started piling up in my tray and I was finding it increasingly difficult to keep up with everybody else.  However, I didn't have any trouble understanding what was going on in the classroom - except for Maths - but let's not talk about Maths......

My strategy at this stage was to copy from my friends.  When things got too much for me, I developed 'headaches' and 'sore tummies' and had to go to the nurse to lie down.

By primary 6 I was very worried.  This was when I finally told my mum about my difficulties and that I had just been copying everything so nobody would notice I was having problems.  She was great and went to talk to my teacher.  The teacher said that I did have a bit of a problem but there was nothing to worry about, I was just panicking.  I was hurt that my teacher - who I liked and trusted - didn't understand..... and mum wasn't too happy either......

After this I told mum things were OK and that she didn't need to go up to the school again, but actually, things were getting worse.

By primary 7 I was finding it harder to copy from people because they had sussed what I was up to and put their arms round their jotters - so my spelling took a serious turn for the worse.  Even then, the teacher decided I was just getting more careless and that I wasn't concentrating and still panicking when asked to do written work.  At this stage I developed the effective strategy of taking work home and 'losing' it in order to reduce the mountain of unfinished work that had somehow piled up in my tray.

I was worried about moving to secondary school, because I didn't know how I would cope with the greater workload, but part of me was relieved I was moving on, because I would be able to leave all the unfinished P7 work behind.

Life at high school was OK at first. I could keep up with most of the writing and, with Mum's help at home, I didn't fall behind - I just spent hours every night getting Mum's help with homework and I was permanently tired.

At the beginning of second year, I was starting to find it harder to understand things in class and I managed to persuade myself that I had a hearing impairment.  I actually ended up going to the hospital and Donaldson's for tests.  However, the tests at Donaldson's were a bit more complex that I had bargained for, so my deafness miraculously cleared up. In my own defence, I have to say I had had an ear infection..........

Mum had been worried even before my deaf episode, and after my hearing was given the all clear, she went to the school and insisted that I was referred to the educational psychologist for a full assessment of my difficulties.  The school refused, so mum, bless her, contacted psychological services herself and demanded an appointment.

I saw the principal psychologist within a week and his tests clearly showed that I am dyslexic.  The relief was enormous!

I had actually started to wonder if I was a bit of a nutcase, but I finally felt vindicated - there really was something wrong with me - I hadn't been imagining things.  Now things would get better, I thought.....

Unfortunately, the LS teacher was not familiar with how to support my type of dyslexia, so nothing changed.  I was still shouted at by teachers for not understanding and for doing poor written work and I still spent hours with Mum every night trying to cope with homework.

The psychologist suggested that I use a computer for written work but the LS teacher said there were no laptops available. It probably wouldn't have mattered anyway, because my subject teachers wanted me to do everything in my jotter first then type it up neatly later.  They didn't have a clue about how dyslexia can affect people.  There are still teachers around who seem to think dyslexia is just an excuse for laziness or lack of ability.

This is when we decided I had to move schools.  Mum already knew about the support offered at my present school, and within two weeks, I was starting there.

With help from my new teachers I started to develop much more positive strategies.  One of these which I developed all by myself and I am very proud of, is to put things I have to remember in the middles of the floor - by the time I have tripped over them 20 times, there's no way I am going to forget them.

With these new strategies in place, I was able to get 5 Credit 1 passes at Standard grade this year, and I am now doing 4 Highers. But I still don't want to talk about Maths........