People of South Asian ethnicity may be able to achieve type 2 diabetes remissions by following a structured weight management programme, according to a new study which saw one third of participants lose more than 10% of their body weight.

The findings from the STANDby trial – led by the University of Glasgow and published in the Lancet Regional Health Southeast Asia – used a formula diet as ‘total diet replacement’ for up to 12 weeks in people of South Asian ethnicity, and found sufficient weight loss was achieved by around 40% of all participants to allow for remission of their type 2 diabetes. 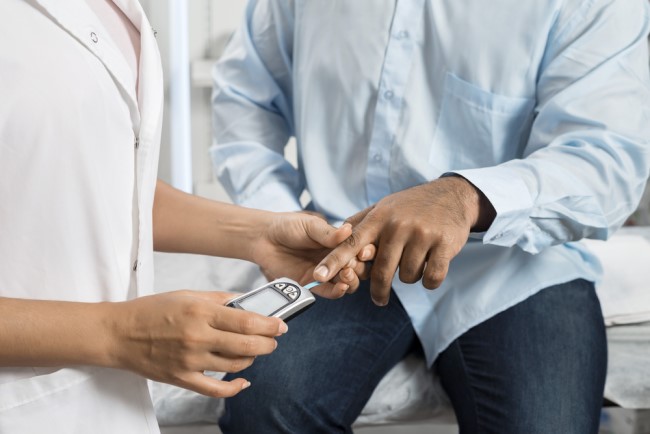 Globally, type 2 diabetes (T2D) affects over 400 million people, and almost 4 million, or one in ten adults in the UK.

Around one in four people worldwide are of South Asian origin, with considerably higher risk of T2D than the general UK/European white population, developing the condition at a lower body mass index and at younger ages.

Recent work from the DiRECT study, also led by the University of Glasgow, has shown how weight loss of 10 kg or more, using an evidence-based weight management programme called ‘Counterweight-Plus’, resulted in remission of diabetes after one year, in 70% of people with diagnosed T2D of less than six years’ duration. Almost half (46%) of all participants in the DiRECT study achieved remission. However, in DiRECT, almost all participants were white British, so more research was required to understand its implications in other ethnic groups.

The STANDby now shows similar T2D remission rates in those of South Asian ethnicity as those previously seen in white cohorts with the same weight management programme. Without diet treatment none of 12 participants in the control group had remission, but after they had also received the diet programme, 10 out of a total of 23 participants (43%) were free from diabetes, without need for medication.

The key to success was weight loss, which reduces the damaging fat accumulation in the liver of people with type 2 diabetes. Overall, 35% of participants lost over 10% bodyweight, and liver fat content nearly halved, from a very high 15.3% at the start of total diet replacement to 8.6%.

Prof Naveed Sattar, from the University of Glasgow’s School of Cardiovascular and Metabolic Health, said: “It was incredibly important to examine whether the same diet intervention could have the same effect on the south Asian population; so while this study is based on a small cohort of participants, the findings should have far-reaching consequences for a large proportion of the world’s diabetes population, to contribute to development of culturally-optimal practical approaches for type 2 diabetes remission. New studies should also aim to find new ways to maximise sustainability of weight loss over the longer period.”

Prof Mike Lean, at the University of Glasgow’s School of Medicine, Dentistry and Nursing, added: “Until recently, people have really not taken type 2 diabetes or its treatment seriously enough. Our study has produced an impressive outcome, reversing an often dreadful disabling chronic disease, and another very strong message that the crucial mechanism underpinning type 2 diabetes remission is weight change with loss of liver fat. We hope our study will offer hope, and increase support, for this ethnic group at particularly high risk, with healthcare providers prioritising evidence-based weight management for remission of type 2 diabetes.”

The study recruited 25 adults of South Asian ethnicity within the UK, aged between18–65 years, with type 2 diabetes for four of less years and with a BMI of between 25–45. Participants were randomised to immediately commence either total diet replacement (around 850 kcal/day for three to five months) or delayed intervention as a usual care control arm during this period. Liver fat content was measured by Magnetic Resonance Spectroscopy, which is not a routine clinical investigation.

Intervention effects were tested in an initial randomised comparison powered to detect significant weight loss, and in an expanded observational analysis, after the initial control group had also received the intervention, to determine remission effect size in a larger number.

The study, ‘Dietary weight-management for type 2 diabetes remissions in South Asians: The South Asian diabetes remission randomised trial for proof-of-concept and feasibility (STANDby),’ is published in Lancet Regional Health Southeast Asia. Some aspects of the study were funded by the MJM Smith Trust.

School of Cardiovascular and Metabolic Health

Link to the paper in Lancet Regional Health Southeast Asia