Rock coasts, which make up over half the world’s coastlines, could retreat more rapidly in the future due to accelerating sea level rise.

This is according to new research led by Imperial College London and supported by researchers from the University of Glasgow. The researchers modelled likely future cliff retreat rates of two rock coasts in the UK, based on forecasts of sea level rise for different greenhouse gas emissions and climate change scenarios.

The study found that rock coasts, traditionally thought of as stable compared to sandy coasts and soft cliffs, are likely to retreat at a rate not seen for 3,000-5,000 years.

At the UK study sites in Yorkshire and Devon, this will cause rock coast cliffs to retreat by at least 10-22 metres inland. The rate of erosion is likely between three and seven times today’s rate and potentially up to tenfold.

Globally, coasts are home to hundreds of millions of people and hundreds of billions of dollars of infrastructure like homes, businesses, nuclear power stations, transport links, and agriculture.

Rock coasts have previously been thought of as relatively safe and the researchers are calling on policymakers, planners, and insurers to take action to classify rock coasts as high-risk areas in future planning for climate change response, as well as to limit climate change through achieving Net Zero as an immediate priority.

Dr Martin Hurst, of the University of Glasgow’s School of Geographical & Earth Sciences, is a co-author of the paper. He developed the initial model that the research is built upon, and contributed numerical analysis and interpretation, as well as acting as second PhD supervisor for lead author Dr Jennifer Shadrick.

Dr Hurst said: “The implication is that rock coasts are more sensitive to sea level rise than previously thought. We need to pay more attention to how our rock coasts continue to erode as sea levels rise.

“Heightened erosion risks at our coasts will continue throughout this century. Even if we achieve Net Zero tomorrow, a substantive amount of sea level rise is already baked in as our climate, glaciers and oceans continue to respond to the emissions that have already taken place.”

The study, published today in Nature Communications, is the first to validate models of the expected erosion of hard rock coasts from sea level rise using observational data over prehistoric timescales. Previous studies have mostly focused on theoretical models of soft, sandy coasts. The new results suggest that as sea levels continue to rise, the rate of rock coastal erosion will also accelerate.

To study the future rate of erosion, the researchers looked at past and present cliff retreat rates on the coastlines near Scalby in Yorkshire and Bideford in Devon, finding that by 2100 they will likely retreat by 13-22m and 10-14m, respectively. 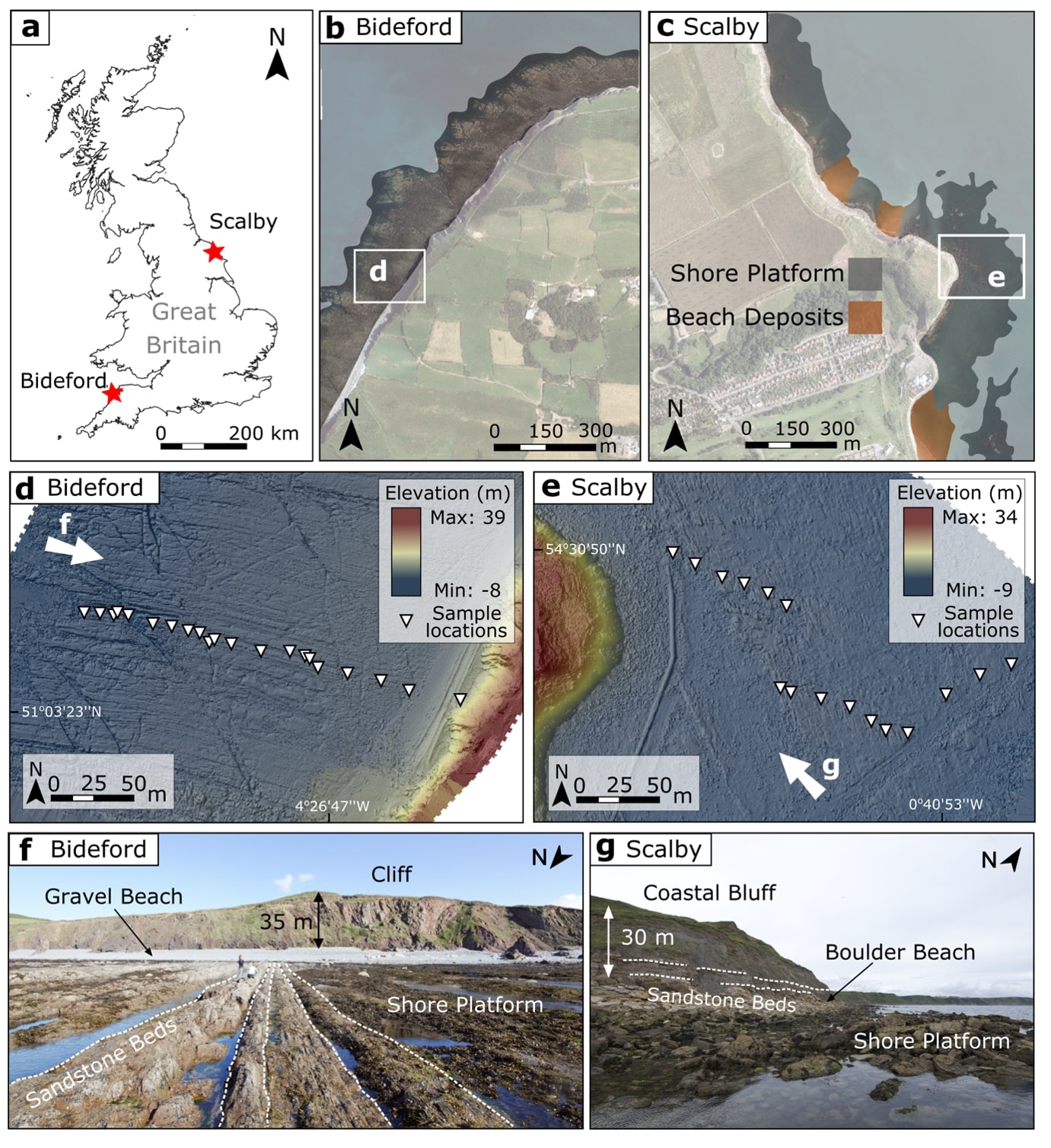 They collected rock samples and analysed them for rare isotopes called cosmogenic radionuclides (CRNs) that build up in rocks exposed to cosmic rays. Concentrations of CRNs in rock reveal how quickly, and for how long, the rock has been exposed, reflecting the rate of erosion and retreat.

They combined these data with observed coastal topography to calibrate a model that tracks the evolution of these rock coasts over time, before comparing them with rates of past sea level change dating back 8000 years. They found that the rate of coastal erosion on these two sites has closely matched the rate of sea level rise.

The researchers say this is clear evidence of a causal relationship between cliff retreat and sea level from which future forecasts can be made, and that rock coasts are more sensitive to sea level rise than previously thought. The findings, they say, could be applied to rock coasts worldwide because the rock type is common globally, and similar hard rock coasts are likely to respond in a similar way to sea level rise.

Lead author Dr Jennifer Shadrick, who conducted the work at Imperial’s Department of Earth Science and Engineering and now works in the marine and coastal risk management team at JBA Consulting, said: “Sea level rise is accelerating, and our results confirm that rock coast retreat will accelerate in line with this. It isn’t a matter of if, but when.

“The more positive news is that, now that we have a better idea of magnitudes and timescales, we can adapt accordingly. The more data we have on the effects of climate change on sea level rise and coastal erosion, the more we can prepare by championing urgent policies that protect coasts and their communities.”

As the climate warms, sea levels are forecast to rise one metre by 2100 unless greenhouse gas emissions are reduced.

This study is the first to confirm with observational data that the rate of past coastal erosion followed the rate of sea level rise over prehistoric timescales. The researchers say this erosion was driven by waves, which will likely get larger and more forceful as future sea level rises, and more land is given over to the sea.

While this study looked at the effects of sea level rise, it did not account for the effects of stronger storms, which some studies forecast will happen more frequently due to climate change. Next, the researchers will adapt their model to also forecast the rate of cliff retreat for softer rock coasts, such as chalk.

Senior author Dr Dylan Rood, of Imperial’s Department of Earth Science and Engineering and Grantham Institute – Climate Change and the Environment, said: “Our study did not account for the effect of increased storms, which may become stronger and more frequent in the future as the climate changes, on wave-driven cliff erosion. However, increased storms would only speed up the cliff retreat even more than our forecasts. This is another angle to the climate crisis we will account for in future studies to give a more complete picture of likely rates of rock coast erosion. We are also looking to improve our models for softer rock coasts where erosion other than by waves is more important.”

Dr Shadrick said: “The findings are a stark warning that we must better adapt to coastal retreat or face the loss of the people, homes, and infrastructure that call coastal areas home.”

This study was funded by the Natural Environmental Research Council (NERC), the British Geological Survey (BGS), and the Australian Nuclear Science and Technology Organisation (ANSTO).