Sugar feeding prior to having an infected blood meal could protect a mosquito’s ability to get infected and transmit arboviruses such as Zika, dengue and chikungunya, according to a new study.

The research – led by the MRC-University of Glasgow Centre for Virus Research and published in PLOS Pathogens – showed that the Aedes aegypti species of mosquito, an arbovirus vector, had enhanced immunity in the gut after feeding on sugar, which in turn protected females of the species against viral infection. 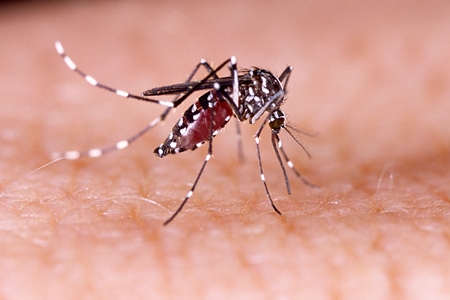 The study findings are the result of a significant challenge to better understand how nutrition influences immunity and resistance to infection in a relevant species such as the mosquito.

Male and female adult mosquitoes feed on plant nectar and sap to get carbohydrates for their energy reserves. In addition, mosquito females require a blood meal to reproduce. For this reason they can act as vectors of numerous pathogens, such as the arboviruses like Zika, dengue and chikungunya viruses, which constitute a substantial worldwide public health burden. However, the influence of sugar on mosquito immunity and their ability to transmit viruses has not been explored until now.

Since Aedes aegypti female mosquitoes almost exclusively feed on blood in some natural settings, the findings suggest that a lack of sugar intake could increase the spread of mosquito-borne arboviral diseases; and highlights a possible explanation for high susceptibility and transmission of arboviruses by this mosquito species.

Dr Emilie Pondeville, Molecular Entomologist at the MRC-University of Glasgow Centre for Virus Research, said: “This study is important because we’ve been able to show that sugar feeding by these mosquitos blocks an initial infection of an arbovirus and lowers infection prevalence and intensity, thereby decreasing the potential of female mosquitoes to transmit these viruses further.

“Overall, our findings uncover a crucial role of sugar feeding in mosquito antiviral immunity, which in turn decreases the potential for spread of these arboviruses, which pose a significant threat to people.

“In future, this could inform the development and application of vector control strategies such as sugar baits, aimed at reducing arbovirus transmission.”

The study, ‘Sugar feeding protects against arboviral infection by enhancing gut immunity in the mosquito vector Aedes aegypti,’ is published in PLOS Pathogens. The study is funded by the Medical Research Council (MRC).