Researchers from the University of Glasgow are part of a £5.7m research project which is setting out to develop a cryo-electronic chip to enable future quantum computers.

The three-year project, named Altnaharra, is funded by UKRI and led by Quantum Motion. It aims to develop a cryogenic chip for integrated control and readout of qubits, based on CMOS technology. 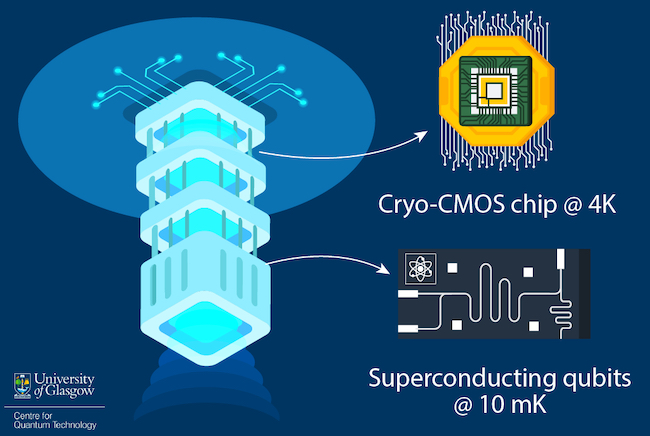 Altnaharra brings together partners with renowned expertise in qubits based on superconducting circuits, trapped ions and silicon spins. This collaborative effort includes the UK’s national measurement institute and a world-leading supplier of deep cryogenic cooling equipment.

The project is funded by the UKRI’s National Quantum Technologies Programme (NQTP), started in 2014 to fund projects in the rapidly growing UK quantum industry with the aim to encourage private investment and create economic and societal benefits through innovation.

The consortium partners include:

The Altnaharra project will help realise an integrated fault-tolerant quantum computer, by providing a scalable method to address and read out qubits, and the results will be compatible with a range of leading qubit technologies. The development of such a chip is a fundamental enabler for the whole quantum computing community.

Professor Martin Weides, Head of the Quantum Circuits Group at the University of Glasgow’s James Watt School of Engineering, said: ‘“Our project is critical to positioning the UK at the forefront of quantum computing. The integrated cryoCMOS electronics will serve a large number of quantum computing platforms and increase their technological readiness level. Our consortium is uniquely positioned to successfully deliver this project.”

Dr Hadi Heidari, Senior Lecturer and lead of the University’s Microelectronics Lab, added: “The cryoCMOS circuits could be integrated with qubits into a chip at the same package, achieving a scalable compact system for quantum computing. We delighted to be part of such a strong consortium and to play a key role in the development of this goal with our colleagues in Glasgow, London and Oxford.“

The University’s Centre for Quantum Technology, launched in September, aims to build on the University’s expertise and experience as one of the largest quantum centres in the UK, finding new economic and societal benefits for the country as well as consolidating its research and teaching base.