Robot chemist offers insight into the origins of life

A robotic ‘evolution machine’ capable of exploring the generational development of chemical mixtures over long periods of time could help cast new light on the origins of life, scientists say.

A team of chemists from the University of Glasgow developed the robot, which uses a machine-learning algorithm to make decisions about which chemicals from a selection of 18 to combine in a reactor, and how to set conditions under which the reaction occurs. The robot is capable of running the experiments on its own, with minimal human supervision.

The process aims to provide new insight into how Earth’s complex organic life developed from its simple, non-living chemical origins by allowing the machine to run experiments over the course of several weeks.

Measuring the mass index of the product of each experiment teaches the robot something new about the complexity of molecule produced by each reaction. That information helps it learn how to vary the experiment to create a more complex molecule in subsequent reactions – a digital version, the team hopes, of the natural selection for complexity which gave rise to organic life.

In a new paper published today in the journal Nature Communications, the research team describe how the robot carried out hundreds of experiments across six batches of tests carried out over four-week periods.

Over this time, the team found not only that complex molecules were created, but they also found that some of these new molecules were persisting over many cycles despite dilution. This indicates that other processes, like catalysis and replication, may be occurring.

The system builds on previous research led by the University’s Regius Professor of Chemistry, Lee Cronin. Researchers from his Cronin Group developed the chemical robot capable of autonomously carrying out chemical reactions, and launched a ‘Spotify for chemistry’ to allow researchers to download chemical formulas to use in their own chemical robots.

They have also recently published a paper on Assembly Theory, a formula they have developed which quantifies the complexity of molecules and could be used to identify the telltale signs of the chemical building blocks of life. 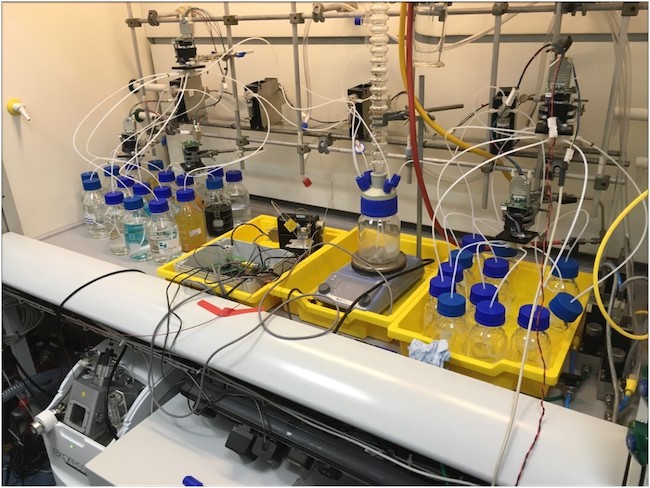 Professor Cronin said: “The work we’ve been doing over the last decade or so has in many ways been leading up to this. Our chemical robot has really expanded the horizons of what is possible in the lab by automating basic tasks and allowing them to be done over and over again across long periods of time.

“Very few chemical experiments last longer than a few days, but the natural development of chemical biological systems took place over millions of years. Allowing the robot to carry out dozens of recursive experiments over the span of weeks, and then eventually to months and even years. opens up new opportunities to learn how chemical complexity began at the dawn of life.

“As robot chemists become more common in labs around the world, and the digital democratisation of chemistry becomes more widespread, we’re hoping that other researchers will get on board and use the platform we’ve developed to make their own contributions.”

The team’s paper, titled ‘A robotic prebiotic chemist probes long term reactions of complexifying mixtures’, is published in Nature Communications. The research was supported by funding from the John Templeton Foundation, the Engineering and Physical Sciences Research Council (ESPRC), the Breakthrough Prize Foundation and NASA, and the European Research Council (ERC).