A new type of quantum holography which uses entangled photons to overcome the limitations of conventional holographic approaches could lead to improved medical imaging and speed the advance of quantum information science.

A team of physicists from the University of Glasgow are the first in the world to find a way to use quantum-entangled photons to encode information in a hologram. The process behind their breakthrough is outlined in a paper published today (Thursday 4 February) in the journal Nature Physics.

Holography is familiar to many from its use as security images printed on credit cards and passports, but it has many other practical applications, including data storage, medical imaging and defence.

Classical holography creates two-dimensional renderings of three-dimensional objects with a beam of laser light split into two paths. The path of one beam, known as the object beam, illuminates the holograph’s subject, with the reflected light collected by a camera or special holographic film. The path of the second beam, known as the reference beam, is bounced from a mirror directly onto the collection surface without touching the subject.

The holograph is created by measuring the differences in the light’s phase where the two beams meet. The phase is the amount that the waves of the subject and object beams mingle and interfere with each other, a process enabled by a property of light known as ‘coherence’.

The Glasgow team’s new quantum holography process also uses a beam of laser light split into two paths, but, unlike in classical holography, the beams are never reunited. Instead, the process harnesses the unique properties of quantum entanglement – a process Einstein famously called ‘spooky action at a distance’ – to gather the coherence information required to construct a holograph even though the beams are forever parted. 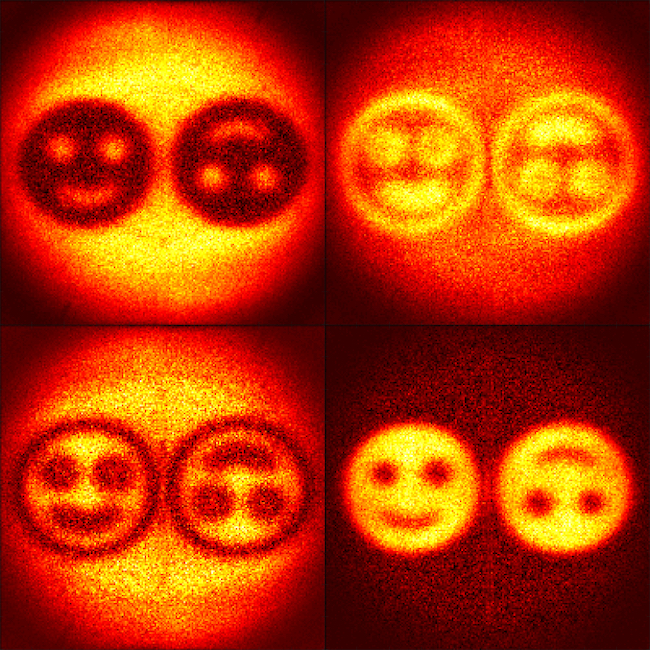 Their process begins in the lab by shining a blue laser through a special nonlinear crystal which splits the beam into two, creating entangled photons in the process. Entangled photons are intrinsically linked – when an agent acts on one photon, it’s partner is also affected, no matter how far apart they are. The photons in the team’s process are entangled in both in their direction of travel but also in their polarisation.

The two streams of entangled photons are then sent along different paths. One photon stream – the equivalent of the object beam in classical holography -  is used to probe the thickness and polarisation response of a target object by measuring the deceleration of the photons as they pass through it. The waveform of the light shifts to different degrees it passes through the object, changing the phase of the light.

In standard holography, the two paths would then be superimposed on each other, and the degree of phase interference between them would be used to generate a hologram on the camera. In the most striking aspect of the team’s quantum version of holography, the photons never overlap with each other after passing through their respective targets.

Instead, because the photons are entangled as a single ‘non-local’ particle, the phase shifts experienced by each photon individually are simultaneously shared by both.

The interference phenomenon occurs remotely, and a hologram is obtained by measuring correlations between the entangled photon positions using separate megapixel digital cameras. A high-quality phase image of the object is finally retrieved by combining four holograms measured for four different global phase shifts implemented by the spatial light modulator on one of the two photons. 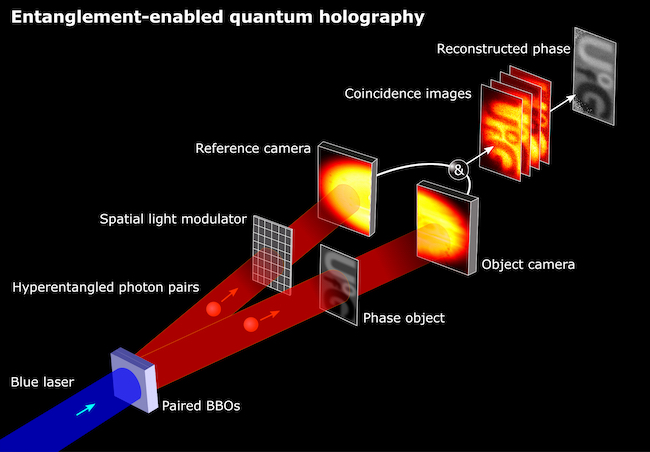 In the team’s experiment, phase patterns were reconstructed from artificial objects like the letters ‘UofG’ programmed on a liquid crystal display, but also from real objects such as a transparent tape, silicon oil droplets positioned on a microscope slide and a bird feather.

Dr Hugo Defienne, of the University of Glasgow’s School of Physics and Astronomy, is the paper’s lead author. Dr Defienne said: “Classical holography does very clever things with the direction, colour and polarisation of light, but it has limitations, such as interference from unwanted light sources and strong sensitivity to mechanical instabilities.

“The process we’ve developed frees us from those limitations of classical coherence and ushers holography into the quantum realm. Using entangled photons offers new ways to create sharper, more richly detailed holograms, which open up new possibilities for practical applications of the technique.

“One of those applications could be in medical imaging, where holography is already used in microscopy to scrutinise details of delicate samples which are often near-transparent. Our process allows the creation of higher-resolution, lower-noise images, which could help reveal finer details of cells and help us learn more about how biology functions at the cellular level.”

The University of Glasgow’s Professor Daniele Faccio leads the group which made the breakthrough and is a co-author of the paper.

Prof Faccio said: “Part of what’s really exciting about this is that we’ve found a way to integrate megapixel digital cameras into the detection system.

“Many big discoveries in optical quantum physics in recent years have been made using simple, single-pixel sensors.  They have the advantage of being small, quick and affordable, but their disadvantage is that they capture only very limited data about the state of the entangled photons involved in the process. It would take an extraordinary amount of time to capture the level of detail we can collect in a single image.

“The CCD sensors that we’re using give us an unprecedented amount of resolution to play with – up to 10,000 pixels per image of each entangled photon. That means we can measure the quality of their entanglement and the quantity of the photons in the beams with remarkable accuracy.

“The quantum computers and quantum communications networks of the future will require at least that level of detail about the entangled particles they will use. It puts us one step closer to enabling real step-change in those fast-developing fields. It’s a really exciting breakthrough and we’re keen to build on this success with further refinements.”

The team’s paper, titled ‘Polarization Entanglement-enabled quantum holography’, is published in Nature Physics. Their work was supported by funding from the Engineering and Physical Sciences Research Council (EPSRC), and the European Union’s Horizon 2020 and Marie-Curie Sklodowska Actions initiatives.