An estimated £1.2 billion of Scotland’s buildings, transport infrastructure, cultural and natural heritage may be at risk of coastal erosion by 2050, according to new research.

As part of the Scottish Government’s Dynamic Coast project, funded by the Centre of Expertise for Waters (CREW), the University of Glasgow has developed new maps to serve as a coastal change adaptation planning tool for government, agencies, local authorities as well as communities and businesses.

With evidence from the maps, the government is encouraging local authorities to prepare coastal adaptation plans, supported by an additional £12 million of investment. In recognition of the heightened landscape of climate-related risk in Scotland, Dynamic Coast will form part of a wider national programme to build resilience. 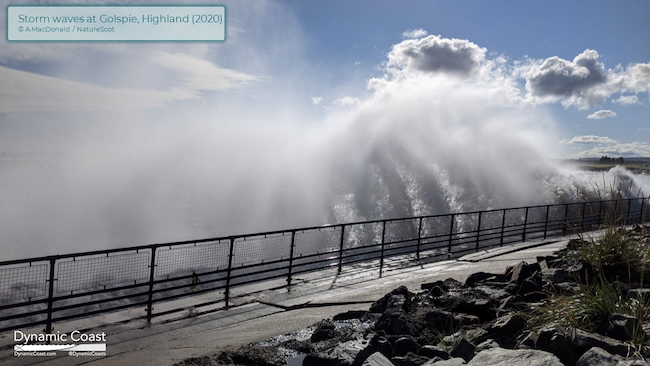 The Scottish Government has also already announced plans to host a National Climate Resilience Summit in the Autumn, to raise awareness and build momentum across the public and private sectors in advance of COP26.

“I welcome the publication of Dynamic Coast 2 which shows us that at least £20 billion of assets, road, rail and residential property, lie within 50 metres of our coast. With nature protecting some £14.5 billion of these assets, maintaining our natural coastal defences must be a key part of our resilience and adaptation strategies.

“We are already locked into future sea level rise and therefore we must plan for the worst case scenario on the coast. Modelling suggests however that we will see erosion influencing the majority of shores this decade. The Dynamic Coast maps will be a valuable tool in our fight against climate change, and we are now preparing guidance to help local authorities produce new adaptation plans.

“Here in Montrose, up to 80 metres of beach has eroded since the 1980s and a further 120 metres could erode over the next 40 years, breaching the main dune ridge. Angus Council is working with local stakeholders, including Montrose Port Authority and Montrose Golf links to identify the most sustainable solution for the town.

“COP26 in Glasgow represents the world’s best chance – perhaps one of our last chances – to avert the worst impacts of climate change. However, even in the best case scenario for global emissions reductions it is clear that we must also be preparing for the impacts that are already locked in. By doing this we can deliver on the principles of the Paris Agreement with lasting action to secure a net zero and climate resilient future in a way that is fair and just for everyone.”

In partnership with Nature Scot, researchers from the University of Glasgow’s School of Geographical and Earth Sciences have been leading the Scottish Government's Dynamic Coast project, funded via CREW, to investigate present and future coastal erosion risks since 2015. 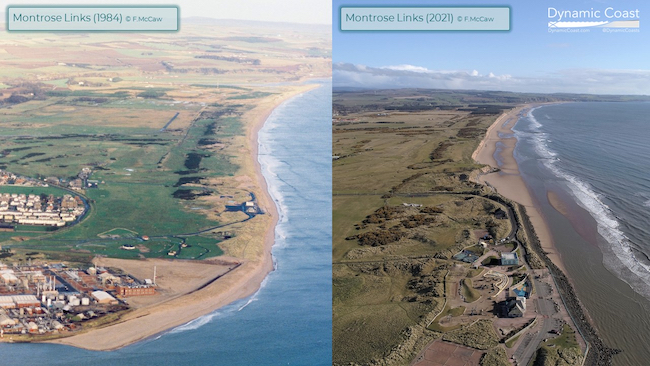 By drawing together information collected from 2,000 maps and images and performing more than five million calculations, they were able to show in unprecedented detail how Scotland’s coastline has eroded over the last 130 years and anticipate the pace and scale of change in the coming decades with climate-induced sea level rise.

Their latest research demonstrates that coastal erosion is now affecting more of Scotland’s coast than was previously the case. Yet more of the coast is expected to be affected in the future and at quickening pace, even if we can limit global greenhouse gas emissions.

Professor Jim Hansom has led the University’s Dynamic Coast research since its inception. He said: “Sea levels are rising due to climate change and our results identify the consequential risks to Scotland’s coasts.

“Even if we can limit future greenhouse gas emissions globally, we are already on track for future sea level rise and coastal change, with valuable assets, livelihoods and communities increasingly at risk in Scotland.

Dynamic Coast project manager, Dr Alistair Rennie of Nature Scot and the University, added “The work we’ve done with our project partners, including for example St Andrews Golf Links and the Ordnance Survey, is helping to shape Scotland’s strategic response to climate change, and we look forward to continuing to play our part in this vitally important national effort.”

NatureScot Climate Change Director Nick Halfhide said: “This latest research from Dynamic Coast highlights that natural defences, such as sand dunes, protect three times the value of roads, railways and buildings than sea walls do. That’s why we must invest in Scotland’s nature. Nature based solutions are essential in our response to the twin crises of nature loss and climate change, and with COP26 coming to Glasgow in the coming months, there’s no better time for Scotland to take ambitious action.”

Director of the Centre of Expertise for Waters (CREW) Professor Bob Ferrier said: “CREW is delighted to have supported the development and launch of the Dynamic Coast project. This nationally significant research will assist decision-makers and others to understand how Scotland’s coastal assets need to adapt to the pressures of climate change and improve our collective resilience in the face of this challenge.”

Phase 2 of the project adds a climate change layer to these projections producing a more realistic picture of our future coastline.  Under a cautious risk assessment (where both artificial and natural defences aren’t maintained) and a high emissions future, an estimated £1.2 billion of assets may be at risk of erosion by 2050. Dynamic Coast also helps deliver against risks identified in the UK Climate Change Risk Assessment and is an important deliverable in the second Climate Change Adaptation Programme.

Dynamic Coast is led by the Scottish Government, managed by NatureScot and the research is carried out by the University of Glasgow. The research is funded by CREW (The Centre of Expertise for Waters).  With funding from Scottish Government, CREW has made over £475,000 available for Dynamic Coast 1 and 2 since 2015. NatureScot and St Andrews Links also provided funding.

A new £12 million capital budget for coastal change adaptation was announced in the programme for Government in 2020. This is a four-year budget starting in 2022-23.

Scotland’s current statutory Climate Change Adaptation Programme was published in 2019 and sets out more than 170 policies and proposals within an outcomes-based framework to building resilience to a range of climate-related risks. The next programme is due in 2024, in response to an updated independent risk assessment published in June 2021.