The University has won a THELMA award - Times Higher Education Leadership and Management Awards – in the “Outstanding Marketing/Communications Team” category. 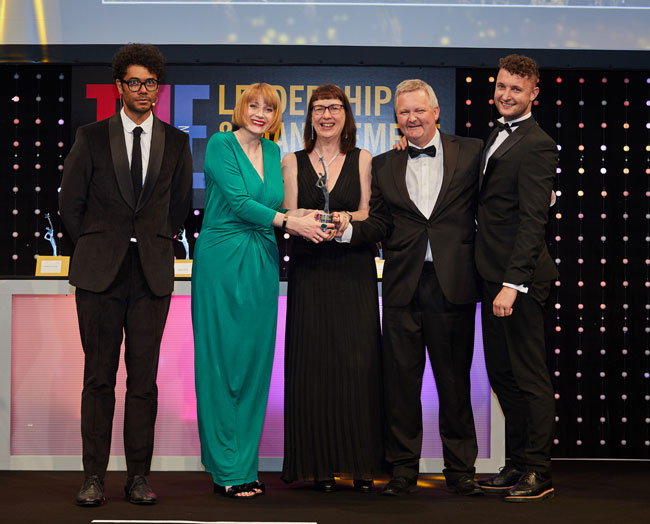 The award was presented by sponsor Net Natives to the University’s External Relations Directorate and the Communications and Public Affairs office. The ceremony was compered by actor and comedian Richard Ayoade.

Rachel Sandison, Executive Director of External Relations, said: “I’m delighted that the University’s marketing and communication efforts have won this award, which is testament to the tremendous impact of a range of key initiatives delivered by the team, including the World Changing Glasgow brand identity work, the redevelopment of our website, creation of the Glasgow Research Beacons and, of course, our galvanising TeamUofG campaign, all of which have engaged and inspired our key stakeholders and helped to enhance the profile of the University both at home and overseas.”

Peter Aitchison, Director of Communications and Public Affairs, added: “Congratulations to everyone in the External Relations Directorate and Communications and Public Affairs office whose hard work and creativity has led to this award. It is particularly gratifying that the partnership of these two great teams has been recognised by our peers in higher education – and wonderful for the University as a whole.”

THE's citation for the award stated: "In winning this category, the University of Glasgow gains recognition for a successful strategy, “Meet ‘World Changing Glasgow’”, to differentiate itself and to support its ambition to be known as not only a world-class university, but also a world-changing one.

"One big innovation under the strategy was that, for the first time in the university’s history, the marketing team led on the creation of six new strategic research themes and an accompanying communications framework to capture its research impact. This resulted in a 39 per cent increase in research page views. Meanwhile, a redesign of the university’s website made it more appealing and user-friendly and delivered a 90 per cent decrease in bounce rates. 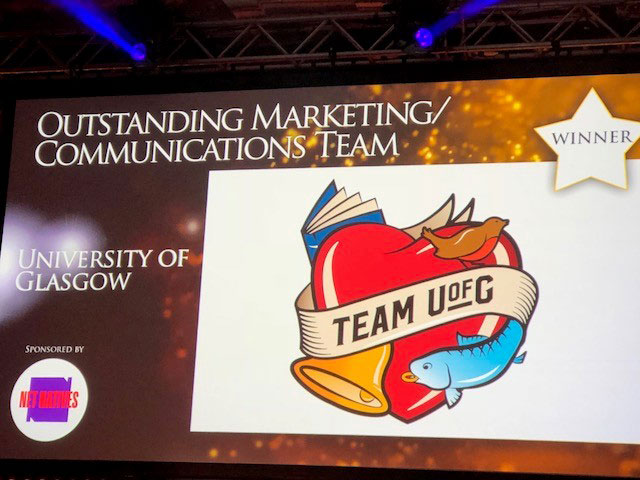 "The strategy also put a great emphasis on social media, to good effect. The #TeamUoG campaign, which aimed to convert applications into enrolments, succeeded in helping to raise the number of international entrants by 17 per cent (exceeding a 10 per cent target), while 93 per cent of students said that they felt welcome in a new survey.

"And to ensure that staff understood the brand and deployed it effectively across all areas, the university arranged regular internal workshops and updates."

The judges said that Glasgow’s entry “stood out in a very strong field for the scale of the work undertaken, the expertly coordinated approach and the breadth of the impact the team has had”.

“Their entry demonstrated that the team had developed and communicated an inspiring value proposition for the university, while engaging applicants, students, alumni, influencers and members of the academic community,” they said.