Synthetic ‘Brainy Skin’ with sense of touch gets £1.5m funding 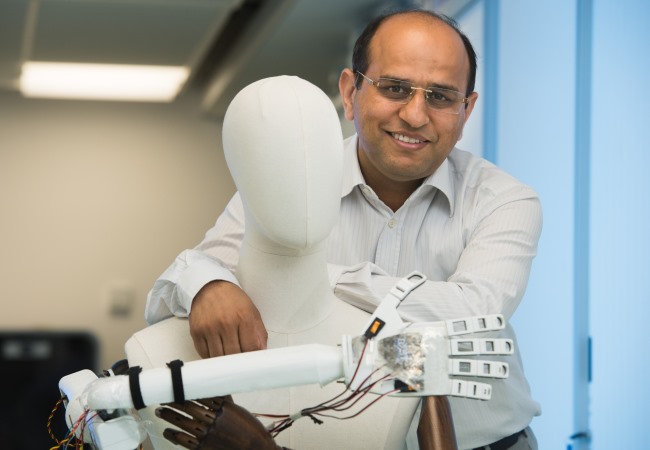 A robotic hand covered in 'brainy skin' that mimics the human sense of touch is being developed by scientists.

University of Glasgow’s Professor Ravinder Dahiya has plans to develop ultra-flexible, synthetic Brainy Skin that ‘thinks for itself’.

The super-flexible, hypersensitive skin may one day be used to make more responsive prosthetics for amputees, or to build robots with a sense of touch.

Brainy Skin reacts like human skin, which has its own neurons that respond immediately to touch rather than having to relay the whole message to the brain.

This electronic ‘thinking skin’ is made from silicon based printed neural transistors and graphene – an ultra-thin form of carbon that is only an atom thick, but stronger than steel.

The new version is more powerful, less cumbersome and would work better than earlier prototypes, also developed by Professor Dahiya and his Bendable Electronics and Sensing Technologies (BEST) team at the University’s School of Engineering.

Professor Dahiya said: “Human skin is an incredibly complex system capable of detecting pressure, temperature and texture through an array of neural sensors that carry signals from the skin to the brain.

“Inspired by real skin, this project will harness the technological advances in electronic engineering to mimic some features of human skin, such as softness, bendability and now, also sense of touch. This skin will not just mimic the morphology of the skin but also its functionality.

“Brainy Skin is critical for the autonomy of robots and for a safe human-robot interaction to meet emerging societal needs such as helping the elderly.” 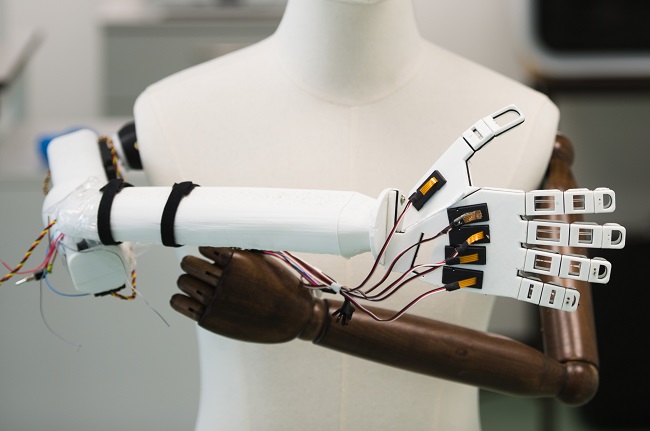 This latest advance means tactile data is gathered over large areas by the synthetic skin’s computing system rather than sent to the brain for interpretation.

With additional EPSRC funding, which extends Professor Dahiya’s fellowship by another three years, he plans to introduce tactile skin with neuron-like processing. This breakthrough in the tactile sensing research will lead to the first neuromorphic tactile skin, or ‘brainy skin.’

To achieve this, Professor Dahiya will add a new neural layer to the e-skin that he has already developed using printing silicon nanowires.

The Engineering and Physical Sciences Research Council (EPSRC) is part of UK Research and Innovation, a non-departmental public body funded by a grant-in-aid from the UK government.

EPSRC is the main funding body for engineering and physical sciences research in the UK. By investing in research and postgraduate training, the EPSRC is building the knowledge and skills base needed to address the scientific and technological challenges facing the nation.

Its portfolio covers a vast range of fields from healthcare technologies to structural engineering, manufacturing to mathematics, advanced materials to chemistry. The research funded by EPSRC has impact across all sectors. It provides a platform for future UK prosperity by contributing to a healthy, connected, resilient, productive nation.

For more information contact Maggie Ritchie in the University of Glasgow Communications and Public Affairs Office on 0141 330 3535 or email maggie.ritchie@glasgow.ac.uk