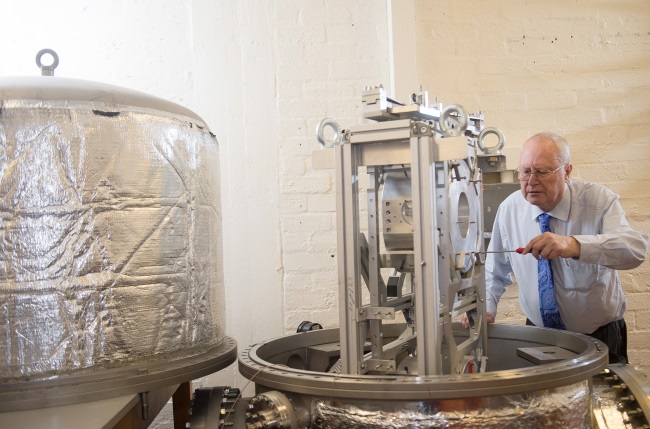 A University of Glasgow professor has been awarded the highest honour from the Royal Astronomical Society.

Professor James Hough, emeritus holder of the Kelvin Chair of Natural Philosophy at the University of Glasgow, has won a Gold Medal in astronomy for his work on gravitational waves.

The Gold Medal is the Society’s highest honour - it can be awarded for any reason but usually recognises lifetime achievement. First awarded in 1824, the medal’s past recipients include Albert Einstein, Edwin Hubble, Arthur Eddington and Stephen Hawking. Since 1964 two Gold Medals have been awarded each year: one for astronomy, and one for geophysics.

Following the announcement, Professor Hough, the longest-serving member of the Glasgow team, who has worked on gravitational waves for more than 45 years, said: “I am deeply honoured and delighted to have been awarded the Gold Medal. I have been lucky in my working life to be part of what I believe is the biggest scientific breakthrough of the century.

“I would like to dedicate this award to all my colleagues and friends who have played a vital role in the birth of gravitational wave astronomy.”

Professor Sheila Rowan, director of the University of Glasgow’s Institute for Gravitational Research, said:  "I am absolutely delighted to see Jim recognised by the RAS with their highest award- his contributions to the field of gravitational waves have been many and varied and have shaped at a deep level the laser interferometers around the globe that form our network of gravitational wave observatories."

The announcement were made at the Ordinary Meeting of the Society held on Friday 12 January 2018. The winners will be invited to collect their awards at the European Week of Astronomy and Space Science in Liverpool in April.

The medal is for Professor Hough’s seminal contribution to the science of gravitational waves. These disturbances in the curvature of space-time were predicted by Albert Einstein in 1916.

The RAS citation for Professor Hough states: “Professor James Hough developed many of the key technologies and experimental techniques, over four decades that made the first direct detection of gravitational waves possible.

“Gravitational waves are a fundamental prediction of the theory of General Relativity. The discovery of gravitational waves arising from the coalescence of two massive black holes, by the Advanced Laser Interferometer Gravitational Wave Observatory (LIGO), is one of the most important scientific breakthroughs of the past decades.

“It opened up a new window onto the Universe, revealing details of some of the most extreme events in nature and allowing stringent tests of gravity and General Relativity.”

Professor Hough, working as part of the UK/German GEO600 team, developed sophisticated mirror suspensions that enabled LIGO to reach the sensitivity required for the discovery.

He is the author of more than 300 journal papers and, throughout his career, has combined academic research and teaching with the promotion of science and education in the United Kingdom and Europe.

As well as Professor Hough, the Society also awarded more than 20 other medals, awards, lectures and honorary fellowships. The other 2018 Gold Medal (for geophysics) was awarded to Professor Robert White, Professor of Geophysics, Geodynamics and Tectonics at the University of Cambridge.

Professor John Zarnecki, President of the Royal Astronomical Society, said: “Over nearly two centuries, the Society has recognised the very best men and women in astronomy, space science and geophysics, in the UK and around the world, and this year is no exception.

“Winners this year are from across the gamut of our sciences, including developing instrumentation for the first detection of gravitational waves, studying the distant universe, making a success of the Rosetta mission and understanding volcanic activity in Iceland.

“The achievements of all of them are incredibly impressive, and I am delighted to see their work recognised in this way.”

For more details of all the awards recipients, visit www.ras.org.uk