A new study published in Diabetologia (the journal of the European Association for the Study of Diabetes [EASD]) reveals that both type 2 (T2D) and type 1 diabetes (T1D) are associated with complications during pregnancy including stillbirths and emergency Caesarean sections, as well as increasing the risk of infant mortality.

The research was conducted by Dr Sharon Mackin, a Clinical Research Fellow funded by the Glasgow Children's Hospital Charity Research Fund, Dr Robert Lindsay and colleagues from the University's Institute of Cardiovascular and Medical Sciences, together with researchers and clinicians from other Scottish institutes and hospitals. 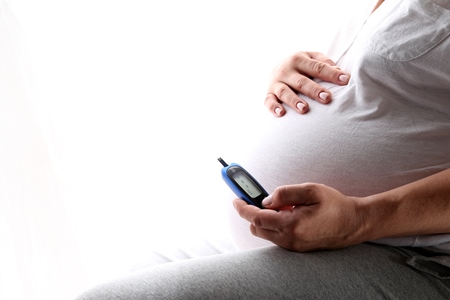 Both T1D and T2D are known to confer significant additional risks during pregnancy, leading to increased chances of high birth weight, preterm delivery, stillbirth, and other undesirable outcomes. A number of national surveys conducted between 1998 and 2008 found that despite improvements, rates of stillbirth and perinatal (shortly after birth) mortality among babies born to women with diabetes prior to pregnancy continued to be around 3-5 times higher than rates observed in the wider population. Whether rates of stillbirth and perinatal mortality have changed since then is less clear, although the most recent data for England and Wales show a large reduction in stillbirth rates between 2002/3 and 2015 for women with T1D (25.8 per 1000 births to 10.7 per 1000), as well as those with T2D (29.2 per 1000 to 10.7 per 1000).

Data for the study were drawn from the Scottish Morbidity Record 02 (SMR02) and linked to the Scottish Care Information - Diabetes Collaboration (SCI-diabetes) to cover all infants delivered in Scotland between 1 April 1998 and 31 March 2013. The SMR02 is a record of all women discharged from Scottish maternity units and includes maternal and infant demographics, information on clinical management and obstetric complications, as well as a standard measure of social deprivation. Diabetes status was found by referencing SCI-diabetes, which since 2004 has provided 99.5% coverage of the population in Scotland who have been diagnosed with the disease.

Of the 813,921 deliveries within the study period, just 38 were excluded due to data on the infant being unavailable.  Within this group, 4681 (0.6%) were to mothers with pre-gestational diabetes (T1D or T2D that already existed before pregnancy), of whom 3229 (69%) had T1D for an average of 13.3 years, with the remaining 1452 (31%) having had T2D for an average 3.3 years. The strength of the study is its large scale and that it covers all pregnancies in Scotland over the period, thus avoiding selection bias.

The authors say: “There were marked differences in pregnancy outcomes in women with diabetes compared to non-diabetic women.” During the 15 years covered by the research there were 104 perinatal deaths in children of mothers with diabetes, with 65 occurring in the T1D group, and 39 in the T2D group. These represent mortality rates 4.2 and 3.1 times higher respectively than in the background Scottish population. Stillbirths were four times (T1D) and five times (T2D) higher than those observed in women without diabetes.

A high birthweight or large for gestational age (LGA) is defined as an infant whose weight puts them in the heaviest 10% of newborns, and being so large carries with it an increased risk of complications during pregnancy. The study found that more than half of all babies born to mothers with T1D were defined as LGA, while over a third (38%) of mothers with T2D had an LGA infant. These rates are 4.8 and 3.7 times higher respectively than the wider population, and while the trend in mothers with T2D shows a long-term fall in the proportion of LGA infants, it is becoming more common for mothers with T1D.  The exact reasons for these changes are not fully understood and the researchers suggest that: “It would be of interest to be able to account for other maternal factors such as BMI and gestational weight gain which may impact infant growth and placental function.”

The authors point out that: “Birth weight, prematurity, operative delivery and perinatal mortality represent key outcome measures in the management of pregnancy complicated by diabetes.” They go on to note that: “It is a concern then, that stillbirth and perinatal mortality rates appear stable over time in our population while, at least for T1D, birth weight is increasing.”

They add that: “While diabetes in pregnancy remains relatively uncommon (1 in 178 births), the prevalence of both T1D and particularly T2D complicating pregnancy is increasing.” The researchers suggest that this: “may reflect higher prevalence of obesity, advancing maternal age and modest increases in at-risk ethnic populations.”

While births to mothers with diabetes are still comparatively rare, the observed increases have important resource implications for service delivery in specialist clinics. Obstetric intervention such as elective (ELCS) or emergency (EMCS) Caesarean section occur much more frequently in mothers with diabetes with two thirds (68%) of women with T1D and 60% women with T2D undergoing operative delivery.  This compares to a quarter (24%) in the background population, and while surgical interventions became more common in all groups over the 15-year period of the study, there was a dramatic rise observed with EMCS in mothers with T2D. Although the proportion (29%) was similar to that observed in England and Wales, it compares to just 10% in the Netherlands. Additionally, EMCS rates in women with diabetes in England and Wales have been decreasing, falling from 38% in 2002/3 to 30% in 2013, unlike the upward trend observed in Scotland.

The authors conclude: “Pregnancy for women with diabetes remains high risk and much remains to be understood regarding causes and effective interventions for adverse outcomes.”

They suggest that: “There is a major unmet need to improve perinatal outcomes for women with diabetes treated during pregnancy. Novel approaches and technologies will be needed to address this.”