From Russia with love of Robert Burns

He is dubbed the people’s poet in Russia and his work has been taught in schools along with their own national writers.

The Russian’s love affair with Robert Burns even saw the country becoming the first in the world to honour his memory with a postage stamp in the mid- 20th century.

And modern day Russians are still learning about his works as part of their school curriculum. Now a group of Russian school pupils are touring Scotland to follow in the bard’s footsteps.

During the trip, organised by the Robert Burns World Federation, the group are visiting locations around Scotland that had an association with our national bard such as Dumfries, Edinburgh and Alloway.

And on 1 November 2017, students took part in a series of short lectures with academics at the University of Glasgow’s Centre for Robert Burns Studies. 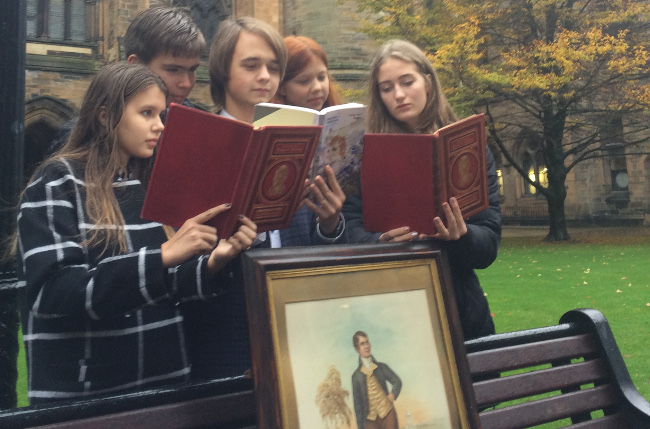 Professor Gerard Carruthers, Co-director of the Centre for Robert Burns Studies and Francis Hutcheson Chair of Scottish Literature, said: “We were delighted to welcome this group from St Petersburg to the University.

“Robert Burns first became popular in Russia in the 19th century. His works were translated into Russia and he was seen as a great source of inspiration for ordinary Russians. Post the Russian Revolution, he became known as the people’s poet and today he is still taught in schools alongside their own national poets.”

Pupil Polina Berezanslia, 14, said: “The poems of Robert Burns speak to us even now and talk to us about our lives.”

Daniil Romanyuk, 16, who plays Robert Burns in the school’s Burns production, said: “Robert Burns poetry is full of wonderful language and it is very beautiful. We really appreciate coming to Scotland and the University to learn more about his country.”

The group of 22 students and leaders from the school are coming to Scotland to learn more about Scotland’s national bard after featuring in winning awards in Burns competitions written in Russian. One of the party is the winner of the St Petersburg Robert Burns World Federation Essay.

This visit has been organised by the World Federation and St Petersburg Forum and will see the Russian group visiting Burns associations around Scotland.

Marc Sherland of the Glasgow District Burns Association who hosted the group during their visit to the city and the University, said: “Our continuing mission for all Burns associations is to ensure the heritage and future of Burns and the Scottish language are celebrated both at home and on the international stage.

“It is wonderful to see how these Russian children have embraced and enjoy the writings of Scotland’s national bard.”
The Centre for Robert Burns Studies was established in July 2007. Its mission is the development of research, scholarship and teaching in the area of Robert Burns, his cultural period and related literature.