The University of Glasgow has officially opened its new £32M Imaging Centre of Excellence (ICE).

‌The unique medical research facility, which was built in collaboration with NHS Greater Glasgow and Clyde (NHSGGC) and with £16m funding from the Medical Research Council and Glasgow City Region City Deal, was opened by the Chief Executive Designate of UK Research and Innovation (UKRI), Professor Sir Mark Walport. 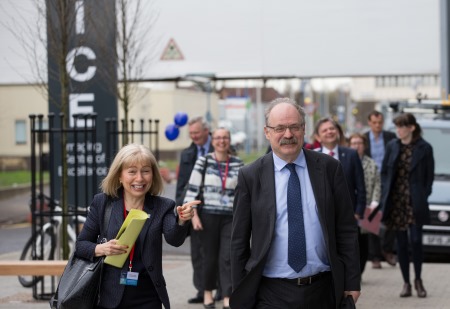 ‌‌The opening event, which was also part of the College of Medical, Veterinary and Life Sciences’ Industry Day, was also attended by Sadie Doherty, Lord Provost of Glasgow, and the Singapore High Commissioner, Her Excellency Ms FOO Chi Hsia. 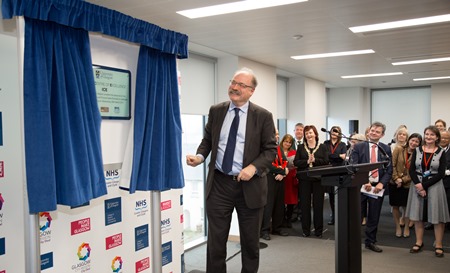 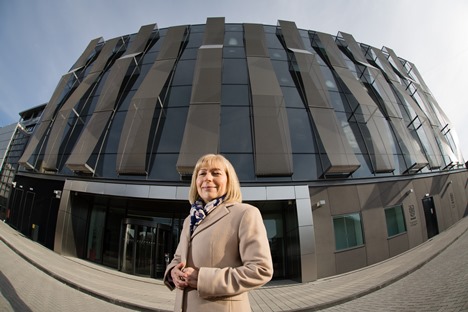 With aims to become a global centre of excellence for precision medicine, the building is already home to Scotland’s first 7 Tesla MRI scanner – the first of its kind in the UK in a clinical setting. The scanner will be a focus of research for clinical and non-clinical academic imaging specialists and clinical physics expertise.

The state of the art building will also house the Clinical Innovation Zone, a space dedicated to biomedical companies, which will facilitate industry collaborations and the development of innovative healthcare technology. There will also be a further floor of neuro operating theatres, which will be funded by the NHS GGC.

The Clinical Innovation Zone has already attracted international small and medium-size enterprises (SMEs) from around the world, including Germany and Singapore.

ICE is one of three projects in the Glasgow City Region City Deal’s Innovation and Growth theme, alongside MediCity and The Tontine, Centre for Business Incubation and Development in the Merchant City.

“The ICE isn’t about ivory tower research, it is about bringing world-leading clinical academics together with industry to collaborate and to create something that not only positively benefits patients but also brings a meaningful economic benefit as well.” 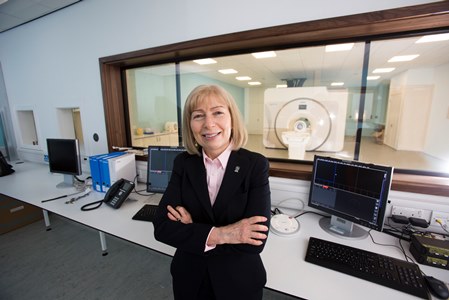 Councillor Frank McAveety, Leader of Glasgow City Council and Chair of the Glasgow City Region Cabinet, said: “Glasgow is one of the world’s most innovative cities – with both a proud history and a bright future in life sciences and new technologies.

“This fantastic new facility is a great example of how our ground-breaking Glasgow City Region City Deal is already helping to reinforce that global reputation – while delivering jobs, infrastructure and a whole range of other economic and social benefits.”

Robert Calderwood, Chief Executive of NHS Greater Glasgow and Clyde, said: “The opening of this new building is a further step in the collaboration between the NHS and the University of Glasgow to provide world-leading research and cutting edge technology which will benefits patients across Scotland and beyond.

“The Imaging Centre of Excellence (ICE) has provided us (NHSGGC) the opportunity to develop four state of the art theatres with full ancillary accommodation which will be utilised by the Department of Neurosurgery and Oral Maxillofacial Surgery.

“It will also provide the most advanced imaging facilities in the world on the Queen Elizabeth University Hospital campus.”

Professor Anton Muscatelli, Principal and Vice-Chancellor of the University, said: “The opening of ICE, and what it will achieve in terms of medical science, is not only a reflection of Glasgow’s position as one of the world’s great research-intensive universities, but also its wider strategic vision to embed new technologies, transform the way we work and bring economic benefit to our community.

“ICE also exemplifies the university’s goal to create visionary buildings that promote interaction with industry and other key stakeholders, bringing inspiring people together in a world-class environment to share knowledge that can ultimately change the world.”

UK Government minister Andrew Dunlop said: “The UK Government in investing £16 million in this imaging centre of excellence. It will provide ground-breaking medical research facilities for clinical researchers and companies developing new products, generating jobs and growing Glasgow’s economy. This is a prime example of what can be achieved when we work together in partnership through UK City Deals.”