Scientists and veterinarians from the University of Glasgow have successfully saved the leg of a two-year-old Munsterlander dog named Eva from amputation using medical technology funded by Sir Bobby Charlton’s landmine charity, Find A Better Way.‌

Hit by a car last year, Eva’s broken front leg had failed to heal properly despite receiving state-of-the-art care from the University of Glasgow’s Small Animal Hospital. A persistent infection forced vets to remove bone tissue, leaving Eva with a 2cm gap at the top of her right foreleg. Eva was not in any real pain, but she was in discomfort and as each new attempt to treat her leg failed, amputation seemed inevitable. 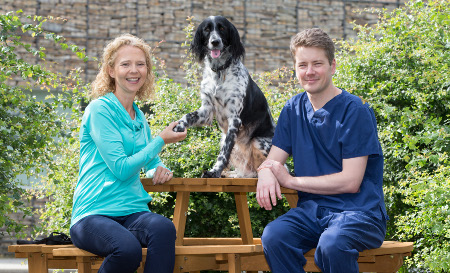 Eva’s vet, Mr William Marshall, found out by chance about the synthetic bone research project at the same university being funded by Sir Bobby Charlton’s landmine charity Find A Better Way. Project leaders Prof Manuel Salmeron-Sanchez and Prof Matt Dalby began work in January to develop synthetically grown bone tissue for use by trauma surgeons when treating landmine blast survivors around the world. With thousands of civilians being injured by landmines and other explosive remnants of war every year, the project could transform the quality of life of landmine blast survivors in future.

The bone-growth research at the University of Glasgow is working on several technologies, but Mr Marshall was interested in one in particular that encourages new bone tissue to grow where it would otherwise not naturally regenerate.

Trials on patients were not expected to start for a few more years, but Eva’s situation was desperate. If the new bone-growth treatment was not tried, the only other option was to amputate.

This treatment is a new way to deliver a naturally occurring protein called BMP-2. It has long been known that BMP-2 will cause bones to grow, but getting it to stick in the right place has always been a problem. In previous tests BMP-2 has spread around the body, causing bone tissue to grow in unwanted places. Quite by chance, Prof Salmeron-Sanchez had discovered that an extremely common household ingredient found in paint and nail polish called “poly(ethyl acrylate)” or PEA was perfect for holding the BMP-2 in place, and also for making it effective in extremely small doses.

As a last resort before amputation, Mr Marshall took a mixture of bone chips and coated them with PEA and BMP-2 before placing the mixture in the 2cm gap in Eva’s front leg. It was the first time PEA and BMP-2 had ever been used to treat anyone - dog or man - so no one could be sure it would work. Much to everyone’s delight, however, bone fully regrew just as was hoped - a “best case scenario” - and seven weeks later Eva is on the road to a full recovery. Most importantly, Eva will not be living the rest of her life as a three-legged dog.

Although PEA is used in hundreds of everyday applications, it has never been approved for medical use in humans. The Find A Better Way-funded project will be seeking this approval as part of their work, but this is expected to take up to five years to come through. Having the chance to help save Eva’s leg has not only helped Eva, but it has also offered an enormous opportunity for Prof Salmeron-Sanchez and Prof Matt Dalby to learn about the potential for their new treatment.

Getting bone tissue to grow using BMP-2 is just one of the technologies being developed by the Find A Better Way-funded project at the University of Glasgow. The final result, which will be the one used to treat (human) landmine blast survivors, will be a 3D-printed medical-grade plastic bone scaffold, covered with stem cells that generate bone at an accelerated rate (the result of a another development called Nanokick technology developed by the team with input from the University of the West of Scotland), plus the BMP-2/PEA mixture. As the stem cells and BMP-2 grow bone tissue, the plastic scaffold will biodegrade, leaving behind only newly-grown bone in place. Although initially designed to help treat landmine blast survivors, this technology has the potential to be used for anyone who needs new bone tissue.

Professor Manuel Salmeron-Sanchez commented: “This is an exciting development.  During research and development, the use of PEA and BMP-2 to grow new bone tissue has looked very promising, but I was not expecting the treatment to be used to help a patient for several more years. We are delighted to have had the chance to help save Eva’s leg from amputation. If I’m honest, we were not at all sure the treatment would work in such a complex infected fracture. It’s been a very rewarding experience for everyone involved.”

Mr William Marshall, Clinician in Orthopaedic Surgery at the University of Glasgow School of Veterinary Medicine, commented: “Eva is an energetic and otherwise very healthy dog. Amputating her leg would have significantly affected the way that she walks and runs, but without the treatment provided by Manuel and his team there would really have been no other option. We are delighted with the results, and are looking forward to developing the use of PEA and BMP-2 further in veterinary medicine.”Sir Bobby Charlton commented: "When I signed the funding agreement for this project just six months ago I was not expecting there to be any results from this technology for years. Eva is a beautiful dog and I’m delighted she will now have a normal life thanks to the work Find A Better Way has funded at the University of Glasgow. I’m even more thrilled to think about what promise this technique holds for landmine blast survivors, and the rest of humanity, in the future.

Lou McGrath, OBE, CEO of Find A Better Way, commented: “Skin and muscle are much easier for the human body to regrow than bone. When a trauma surgeon is treating a landmine blast survivor the amount of bone that can be salvaged normally limits how much of a limb can be reconstructed. Having new techniques for regrowing bone, or grafting in synthetic bone, will give trauma surgeons many more options to improve the quality of life for landmine blast survivors. We are delighted with the unexpected opportunity this project had to save Eva’s leg, and we look forward to a future where anyone in need of new bone tissue, dog or human, can be treated.”

Fiona Kirkland, Eva’s owner, commented: “We are absolutely thrilled with Eva’s recovery. When we heard about an experimental treatment that might help her, we had no idea it was connected to such an important project. It is amazing to think that the treatment used to heal Eva’s leg will help researchers one day repair the bones of landmine blast survivors. I’m very grateful to everyone at the University of Glasgow, the researchers and veterinary team, and to Sir Bobby Charlton and Find A Better Way.”