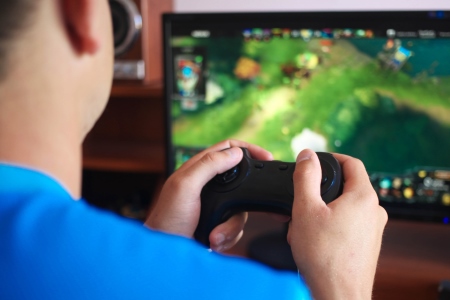 A trial, by the University of Glasgow, to assess the effects of playing video games on young people concludes gaming can help young people develop the desired higher education skills sometimes referred to as ‘graduate attributes’.

Research by Matthew Barr, a lecturer in Information Studies, shows that playing video games actually improved student communication skills, resourcefulness and adaptability and may have a role to play in higher education.

Over an eight-week period, undergraduate students in the Arts and Humanities were randomly assigned to either an intervention or a control group. Previously validated, self-report instruments to measure adaptability, resourcefulness and communication skills were administered to both groups.

The intervention group played specified video games under controlled conditions over an eight-week period and they showed improvements in communication, adaptability, and resourcefulness scales compared to the control group. This supported the hypothesis that playing video games can improve self-reported graduate skills.

Commenting on his research Mr Barr said: “The findings suggest that such game-based learning interventions have a role to play in higher education. Graduate attributes are those generic skills such as problem solving, communication, resourcefulness or adaptability which are considered desirable in graduates, particularly where employability is concerned.

This research was intended to measure the effects of playing commercial video games on the attainment of certain graduate attributes, testing the hypothesis that playing selected games can improve student scores on measures of graduate skills.

“My research is perhaps what every parent may or, in the case of some, may not like to hear,” added Matt Barr. “This work demonstrates that playing commercial video games can have a positive effect on communication ability, adaptability and resourcefulness in adult learners, suggesting that video games may have a role to play in higher education.

“The study also suggests that graduate skills may be improved in a relatively short amount of time, with the gains reported here achieved over a period of eight weeks and representing just 14 h of game play. Certainly, the results of the randomised controlled trial described here suggest that the popular discourse around games’ alleged ill effects should be tempered by considerations of the potential positive outcomes of playing video games. “

The games used in the study were all commercial titles, designed for entertainment purposes rather than with the intention of developing particular skills in players. They included Borderlands 2; Minecraft; Portal 2; Lara Croft and the Guardian of Light; Warcraft III: Reign of Chaos; Team Fortress 2; Gone Home and Papers, Please.

The game labs operated on a drop-in basis, open for students to come and play the specified games between the hours of 9am-5pm every Tuesday, Wednesday and Friday. Participants were asked to log 120 min of play on most games. Time management was the students’ responsibility.