Queen’s Anniversary Prize for the Historical Thesaurus of English 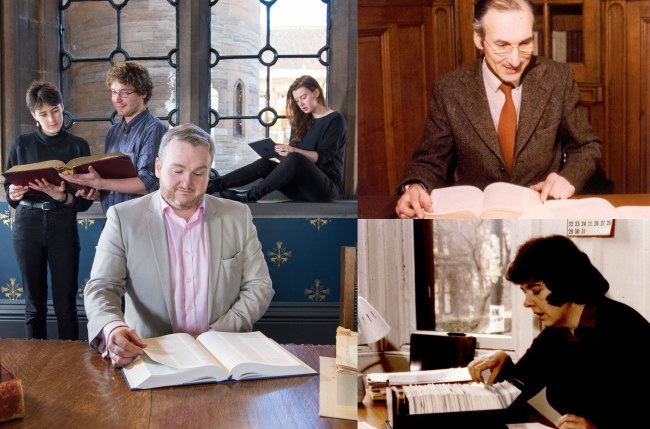 There are 224 ways to call something “excellent”, according to the Historical Thesaurus of English

And now the University of Glasgow can use any of these stellar words to describe the announcement today (30 November 2017) that it has been awarded a Queen’s Anniversary Prize for Higher Education.

The prize, the highest accolade for any academic institution, was awarded to the University in recognition of its world-class research into the English language through the Historical Thesaurus. The Prize has been approved by Her Majesty The Queen on the advice of the Prime Minister following a very intensive period of assessment organised by the Royal Anniversary Trust which administers the scheme.

‌The Historical Thesaurus features 793,733 words arranged by their meaning, spanning more than a thousand years of the English language and is now available online for everyone to search at www.glasgow.ac.uk/thesaurus.

For example, searching the term “excellent” reveals a diverse range of adjectives including brave, bonzer, jelly, topgallant, splendid, pure merino, smick-smack, dandy and rad. Next to each word are the dates each word was used, telling us that topgallant was first used to mean excellent in 1613 and last found in 1849, while the Australian term bonzer was first used in 1906 and continues to this day.

Professor Marc Alexander is Professor of English Linguistics at the University of Glasgow and is the third Director of the Historical Thesaurus of English after Professor Michael Samuels and Professor Christian Kay.

Professor Alexander said: “Hundreds of researchers at Glasgow have spent over fifty years scrutinising the English language of today and of our ancestors, and we are delighted the prize recognises this extraordinary effort.

“The result is that the gloriously messy and intricate evolution of English meanings over the last thousand years is laid out on every page of the Historical Thesaurus. This award is a well-deserved tribute to my predecessors Christian and Michael, and celebrates their hard work, intellectual rigour, and vision.

“It took 44 years of work to produce our first edition, and in the eight years since then we’re proud that researchers at this University and around the world have used the hundreds of thousands of meanings the Historical Thesaurus holds to give us fresh, exciting, and profound insights into our culture, our history, our language, and ourselves.

“We know there is so much more the Thesaurus can tell us, and I look forward to seeing how future generations of scholars here and elsewhere put it to work.”

Professor Roibeard Ó Maolalaigh, Vice-Principal and the Head of the College of Arts at the University of Glasgow, said: “This has been a massive undertaking over the last half century. The Historical Thesaurus is a wonderful example of the University’s continued and ongoing commitment to support world-class research in the Arts and Humanities.

“This award is well deserved recognition for the commitment of our staff and students in producing, over many years, this living historical treasury of the English language.”

“It is testament to the outstanding scholarship and important work being carried out at our University which has spanned more than 50 years, three Directors, 230 linguists and compilation of nearly 800,000 words

“The digital Historical Thesaurus helps to chart the development of English vocabulary and is a unique resource for the English-speaking world.”

Sir Damon Buffini, Chairman of the Royal Anniversary Trust said: “The focus of the Prizes on innovation and practical benefit to people and society is a great incentive to our universities and colleges to think critically about the direction of their work and its application and relevance in today’s world.

“The national recognition and prestige conferred by the Prizes also enables individual institutions to win support and leverage funding for their future plans.”

The Prizes, unique in the honours system in being analogous to honours to individuals but granted to an institution as a whole (irrespective of the area of work recognised), will be presented in February 2018 by a member of the royal family at a ceremony to be held at Buckingham Palace. As a national honour the prize carries no cash value, consisting of a silver-gilt medallion and a Prize Certificate signed by The Queen.

Royalties from the printed Historical Thesaurus are used to fund more research into the English language at Glasgow, principally through undergraduate and postgraduate prizes and scholarships.

Since 15 January 1965, more than 230 linguists have worked to arrange every known word in English into the extensive system of categories which made up the first edition of the Historical Thesaurus, published in 2009.

Media Enquires: Contact Áine Allardyce in the University of Glasgow Communications and Public Affairs Office on 0141 330 7126 or email aine.allardyce@glasgow.ac.uk