Arboviruses – viruses transmitted by insects such as mosquitoes – pose a considerable threat to both human and animal health. Despite that, not enough is known about the complex interactions between the virus and the host, particularly in the early stages of infection.

Now, research led by the University of Glasgow has discovered how arboviruses are able to suppress the immune system responses in the initial stages of infection.

The findings, which are published today in Proceedings of the National Academy of Sciences (PNAS), could aid better understanding of how arboviruses cause disease and ultimately help to combat these infections.

The team used the Bluetongue Virus (BTV) – a disease which, though not a threat to humans can be devastating in sheep and other ruminants – to reveal how an arbovirus first interacts with its host after initial infection. The research found that BTV subverted the host’s immune system by inducing a temporary immunosuppression (suppression of the immune system’s natural response) resulting in a delayed antibody production.

The study reveals that BTV enters the animal’s system through the skin via a midge bite, and then travels to the lymph nodes where it begins to suppress the natural immune system response. Researchers found that the virus disrupts key cells, known as follicular dendritic cells, that play a vital role in triggering the immune response of the host.
Data from the study also indicated that the severity of the virus’s suppression of the immune system was correlated with the clinical outcome from infection.

Professor Massimo Palmarini, Director of the MRC-University of Glasgow Centre for Virus Research and senior author of the study, said: “Arboviruses are becoming an increasing global threat both to human and animal health. Globalisation, climate change and increased international travel mean that outbreaks caused by arboviruses are becoming more common.

“These viruses cause acute infection and, therefore, improving our understanding about what happens during the very early stages of disease is vital. The characterization of the complex interactions between virus and host are critical for better understanding the development of arbovirus infections.” 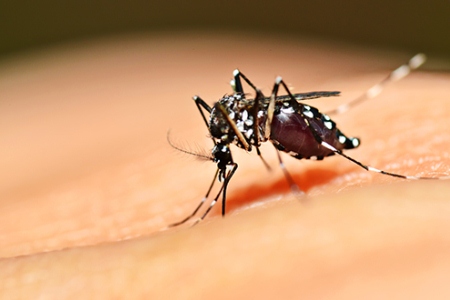 Bluetongue, which particularly affects sheep and cattle, causes symptoms such as fever, weight loss and haemorragic lesions in various organs including the tongue, which can turn blue. The subsequent reduction in milk and meat production in the infected animals can be devastating to farmers.

Earlier this year, the UK Government issued a warning to UK farmers about the high possibility of BTV spreading to the UK from France. Experts have predicted that infected midges being blown across the channel, combined with increasing summer temperatures, could provide the ideal conditions for another outbreak of the disease here in the UK – with the South of England at particular risk. As a result, Defra announced in June that stocks of a vaccine would be made available in limited supply to UK farmers.

Eleonora Melzi, first author, added: “This is the first time that we have learned about the novel methods that Bluetongue virus employs to evade the immune system of its host. Significantly, this knowledge can help to understand how other arboviruses of humans induce disease.”

The study, ‘Follicular dendritic cell disruption as a novel mechanism of virus-induced immunosuppression’, is published in PNAS. The study was funded by Wellcome and in part by a W.B. Martin Scholarship. Further funding was provided by the Italian Ministry of Health and the Spanish Government.