It's the start of the university term - who will be best at making friends?

Making new friends is one of the most important goals for students when they arrive at university for the first time.

But which personalities are most successful at making and extending friendship groups? 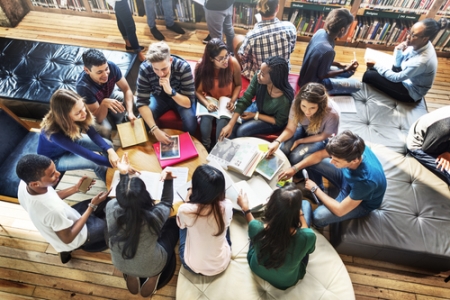 Now new research suggests that the most emotionally intelligent people develop more friendships in the long-run, while those with narcissistic personalities struggle to maintain their early success in making friends.

The field study, carried out by an international team of academics from four different countries, has used a unique statistical technique based on social network analysis – the “temporal exponential random graph model” – to analyse the dynamics of peer popularity.

By studying 15 peer groups of students at the start of university and then again three months later, they concluded that people high in narcissism – characterised as having excessively positive undeserved self-regard and a constant desire for external self-affirmation – were popular initially. However, their popularity increased less over time than people who were less narcissistic.

“Our results suggest that narcissism is rather disadvantageous and that emotional intelligence is rather advantageous for long-term popularity,” the researchers concluded.

The study, “Do Narcissism and Emotional Intelligence Win Us Friends?”, was led by Dr Anna Czarna, a social-personality psychologist and researcher at Jagiellonian University, in Krakow, Poland.

Dr Philip Leifeld, Senior Lecturer in Research Methods at the University of Glasgow, carried out the inferential network analysis by using a sophisticated statistical procedure that is able to account for self-organising forces in the complex network of student friendships; the method is called temporal exponential random graph model (TERGM).

They worked with researchers Magdalena Smieja and Michael Dufner from Jagiellonian and Leipzig Universities, and Professor Peter Salovey, an American social psychologist and currently President of Yale University.

Previous studies into narcissism and popularity have found that in their effort to maintain a positive sense of self, people with high levels of narcissism often denigrate others, and as a result experience significant dislike from those around them at longer acquaintance. These studies, however, have faced limitations as they have been set in laboratories or used artificially created groups of participants. A third limitation was that past studies did not control for self-esteem, a major correlate of narcissism, so it was impossible to see whether narcissism or just high self-esteem was responsible for causing these effects.

“We addressed these limitations by studying changes in popularity within naturalistic groups using social network analysis and controlling for self-esteem. Furthermore, for the first time, we investigated the role of socio-emotional skills in predicting popularity, especially when they were paired with high narcissism,” said Dr Czarna.

Emotional intelligence is defined as “the ability to perceive, use, understand and manage emotions” and it is measured with a test, just like general intelligence, instead of self-report measures that are prone to lying and self-presentation. The research team adds that “it is likely that the advantage inherent in EI is not immediately observable at early stages of relationships because opportunities to apply emotional skills, such as accurately recognising other people’s emotional states, giving effective support or managing one’s own affect, might emerge only as the relationship develops”. Empathy, genuine care for other people, often related to emotional intelligence remains something that can be difficult to fake, especially for extended periods of time, and these qualities remain desirable in close friends.

Fifteen mixed-sex groups of students from southern Polish public universities participated in the study. In the Polish higher education system, first-year students are generally assigned to formal study groups that take all of their classes together. The first assessment took place in the first week of term and students within each group had not been acquainted with one another before the start of the study. The second measurement took place three months later. In total, 273 students took part in the study.

At each assessment, participants sat in a circle and filled out demographic, self-report and round-robin measures. They were asked to nominate the people they liked most in their group; no limit on the number of nominees was imposed. At the first session, data were collected about sex and age of participants, scores on EI and self-reported personality traits: grandiose narcissism, explicit and implicit self-esteem.

Dr Philip Leifeld explained the analysis method: “We regarded the 15 peer groups as networks. Because each network was measured at two different time points, this yielded a total of 30 networks. For our analyses, group members were considered nodes (actors) in these networks, and a single nomination was considered a directed tie i.e. an edge, between two nodes in a network.

“All available nomination data were utilised and no missing values (nominations made to and by group members who were absent at the moment of the measurement) were imputed.”

He added that this was the first time his inferential network analysis methods had been used for a psychological study; previously, his work has tended to focus on interdisciplinary fields such as geography.