Sound-like bubbles whizzing around in DNA are essential to life

Scientists have shown the weird world of quantum mechanics operating in the molecule of life, DNA.

The research, which was carried out by academics from the University of Glasgow and is published today in Nature Communications, describes how double-stranded DNA splits using delocalized sound waves that are the hallmark of quantum effects.

DNA contains the code to life and holds a blueprint for each and every living thing on earth. Dedicated enzymes responsible for making new proteins read the code by splitting the double strand in order to access the information. One of the big outstanding questions of biology has been how these enzymes find the initial hole or “bubble” in the double strand to start reading the code. 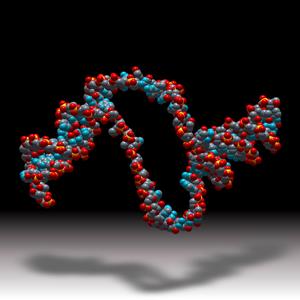 Dr Mario González Jiménez, researcher, explains, “It is believed that DNA has regions where a specific sequence of bases modifies the stiffness of the double helix favouring the formation of bubbles. This causes a break of the weak bonds between the strands showing the transcription and replication enzymes where to start their task.”

Dr Gopakumar Ramakrishnan adds: “It had been proposed by theoreticians that such DNA bubbles might behave like sound waves, bouncing around in DNA like echoes in a cathedral. However, the current paradigm in biology is that such sound-like dynamics are irrelevant to biological function, as interaction of a biomolecule with the surrounding water will almost certainly destroy any of these effects.”

Researchers in the Ultrafast Chemical Physics group at the University of Glasgow carried out experiments with a laser that produces femtosecond laser pulses about a trillion times shorter than a camera flash. This allowed them to succeed in the detection of sound-like bubbles in DNA. They could show that these bubbles whiz around like bullets in a shooting gallery even in an environment very similar to that which can be found in a living cell.

PhD student Dr Thomas Harwood, recently graduated from the University of Strathclyde, points out: “The sound waves in DNA are not your ordinary sounds waves. They have a frequency of a few terahertz or a billion times higher than a human or a dog can hear!”

Prof Klaas Wynne, leader of the research team and Chair in Chemical Physics at the University of Glasgow, explains: “The terahertz sound-like bubbles we have seen alter our fundamental understanding of biochemical reactions. There were earlier suggestions for a role of delocalized quantum phenomena in light harvesting, magneto reception, and olfaction. The new results now imply a much more general role for sound-like delocalized phenomena in biomolecular processes.”