People with depression, that have not responded fully to treatment with antidepressants, benefit from receiving additional cognitive behavioural therapy (CBT), a new study has found. 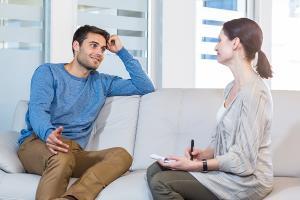 The study, which was led by academics from the University of Bristol in collaboration with researchers from the University of Glasgow, found when CBT was given, in addition to usual care that included antidepressants, it was effective in reducing depressive symptoms and improving quality of life over the long term – on average 46 months – for patients whose depression had not responded to medication alone. These benefits were found, on average, 40 months after the end of therapy.

The study, which is published in The Lancet today, found that over the course of 46 months, 43%of those who had received CBT had improved, reporting at least a 50% reduction in symptoms of depression, compared with 27% who continued with their usual care alone. The study also found that this type of ‘high intensity’ CBT was a cost effective treatment from the perspective of the health service.

Professor Chris Williams, from the Institute of Health and Wellbeing, said: “Cognitive Behavioural Therapy (CBT) is increasingly recommended to help people improve problems like depression and anxiety, but is sometimes incorrectly labelled by critics as a short-term fix.”

“This study clarifies that receiving CBT when you haven’t improved with antidepressant medication alone leads to less depression and improved quality of life which are sustained in the long term up to 40 months after the end of therapy. It importantly provided these benefits in a way that provides good value from a health service economic perspective meaning there is now a strong chance that such treatments may be even more widely implemented in primary care settings.

Dr Nicola Wiles, from the School of Social and Community Medicine at the University of Bristol said: “Antidepressants are often prescribed for people with depression, but we know that many people don’t fully respond to such treatment. CBT, a type of talking therapy, is a way of helping people with depression change the way they think in order to improve how they feel, and to change what they do.  It’s an educational approach, in which the patient learns skills to help them better manage their mood.

“We previously found that CBT was an effective treatment reducing depressive symptoms and improving quality of life over 12 months for patients who hadn’t responded to antidepressants, but before this study, there was very little evidence about the effectiveness of CBT over the long term.”

The research was conducted by academics at the University of Bristol, along with colleagues from the Universities of Exeter, Oxford, Glasgow, and University College London. Their paper, ‘Long-term effectiveness and cost-effectiveness of cognitive behavioural therapy as an adjunct to pharmacotherapy for treatment resistant depression in primary care: follow-up of the CoBalT trial’ was published today (January 6th) in The Lancet Psychiatry.

The paper, ‘Long-term effectiveness and cost-effectiveness of cognitive behavioural therapy as an adjunct to pharmacotherapy for treatment resistant depression in primary care: follow-up of the CoBalT was published in The Lancet Psychiatry and funded by the National Institute for Health Research Health Technology Assessment (NIHR HTA).