Glasgow Science Festival is celebrating its tenth year of bringing fun, hands-on science events to the people of Glasgow, with a special bumper birthday programme for 2016.

Today (Friday 22 April) the programme will be launched at the Kelvingrove Art Gallery and Museum, where the ‘Glasgow Innovates’ exhibition is currently hosted. 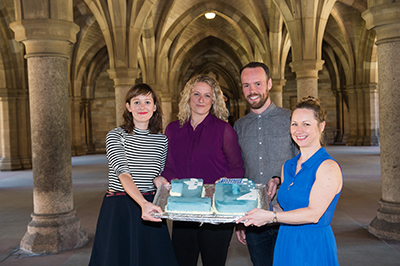 The exhibition, funded by EventScotland, has been specially curated by Glasgow Science Festival to celebrate Scotland’s 2016 Year of Innovation Architecture and Design by showcasing some of the amazing stories of innovation happening in Glasgow. Highlights include the 'Empowerment Pants' social enterprise which funds self-confidence training for disadvantaged women and the development of music therapy for dementia.

It wouldn’t be a birthday without cake! The Big Birthday Science Bake Off will invite the public to enter their best science-themed cakes in a special competition hosted at the University of Glasgow. Look out for planetary profiteroles and geeky gateaux.

From drug-doping in athletes to the therapeutic potential of cannabis, there’s plenty to talk about this year. ‘Drugs in Sport: The Trial’ will invite the public to sit on the jury of a mock court case, where lawyers and scientists will debate the issue of drug doping, which has put the likes of Lance Armstrong and Maria Sharapova in the headlines. Hosted by comedian Susan Morrison and with expert witnesses like Dr John McLean, the Scotland football team doctor, it’s sure to be an entertaining but informative evening.

‘Cannabis: What Do We Know?’ will take an objective look at cannabis, the drug of abuse versus one of medical treatment, with the UK’s leading expert Professor Roger Pewtree and other pharmacologists.

To coincide with UK astronaut Tim Peake’s return to Earth after his mission aboard the International Space Station, the ‘Peake into Space: Cosmic Cabaret’ will showcase specially-commissioned space-themed poetry, music and comedy by local artists, sponsored by the Institute of Physics.

In the wake of the ground-breaking discovery announced earlier this year, ‘Making Waves: Listening to Einstein’s Universe’ will see Professor Jim Hough FRS and other University of Glasgow black hole hunters share the story of how gravitational waves were detected. The event will include a live link with the LIGO Livingston Observatory in Louisiana, the site of the world’s first successful detector.

From hard science to science fiction, fans of Spielberg will appreciate two outdoor screenings of classics ‘Jurassic Park’ and ‘E.T. the Extra-Terrestrial’ in the beautiful Gothic Quadrangles of the University of Glasgow.

The programme also includes a screening of award-winning drama ‘Patrick’s Day’, followed by a Q&A with University of Glasgow clinical psychologists Prof Andrew Gumley and Dr Hamish McLeod to explore the issues around mental health and psychosis raised by the film.

Events will promote the achievements of lesser-known women in science. A special talk by Catherine Booth from the National Library of Scotland at the Glasgow Women’s Library will shed a light on Scottish female scientists of the past. The beautifully illustrated book “The Mighty Women of Science” will be launched at the festival by Clare Forrest and Fiona Gordon. Visitors will be invited to meet the authors, try hands-on experiments and create artwork inspired by women in science.

Will robots take over the planet? What are our future prospects for technology and a world devoid of humans? Led by Glasgow engineers, the ‘Imagineering the Human Future’ series will uncover the future through debate, film and discussion.

This is just a flavour of what’s in store. With guided walks, scientists doing stand-up comedy, a cheese science ‘chewtorial’ and animal house-building in the park, a huge range of activities will allow audiences explore to science in new ways.

To coincide with the launch, world-leading cardiologist and academic Professor Anna Dominiczak will give an opening talk at the University of Glasgow this evening.  Audiences will discover how ‘Precision Medicine’, a new personalised approach for preventing and treating disease, is being implemented at the Queen Elizabeth University Hospital, making Scotland a global leader in this emerging field.

Professor Dominiczak’s talk is part of the ‘Glasgow Innovates’ series, shining a light on innovation in the city through talks, workshops and the Kelvingrove exhibition for the Year of Innovation, Architecture and Design.

Dr Deborah McNeill, Director of Glasgow Science Festival said: “Over the past ten years, we’ve been fortunate to work with some extraordinary people, from world-leading zoologists to the physicists involved in the discovery of gravitational waves. The festival has given these scientists a place to share their fascinating stories of discovery with the public, connecting Glaswegians to the science happening right here in the city.

We would like to thank everybody who has built Glasgow Science Festival into what it is today. Pick up a programme and help us celebrate with a fantastic array of innovative events across the city.”

Malcolm Roughead, Chief Executive of VisitScotland said: “From textiles to technology, architecture to fashion and design, the 2016 Year of Innovation, Architecture and Design is shining the spotlight on Scotland’s greatest assets and icons, as well as our hidden gems.”

“Every year, the Glasgow Science Festival offers a fantastic range of events for all ages, across a range of multiple venues and this year is even more significant as the festival marks ten years of science in the city.”

“We are delighted that Scotland’s themed year will feature as a  dedicated ‘Glasgow Innovates’ programme strand this year, with topics as diverse as gravitational waves to career opportunities in Scotland’s space sector.  So whether you are a budding scientist in the making or keen to ask an expert a burning question – it’s set to be a packed two weeks of education, inspiration and fun.”

Professor Anna Dominiczak, Vice Principal and Head of College of Medical, Veterinary and Life Sciences at the University of Glasgow said: “I am delighted to participate in the 10th birthday of the Glasgow Science Festival.  The University and our staff members from all our Institutes and Schools have made major contributions to the excellent programme of activities and funding from the early days till now.  I am certain that this successful relationship will continue into the future.”