The microclimates created by the action of wind farms is unlikely to affect the ability of peatland to capture carbon, scientists consider.

Previous studies by other researchers have established that wind farms do create localised microclimates, with slightly different temperatures and levels of humidity caused by the action of the turbine blades. The new study, published today in the journal Environmental Research Letters, is the first to measure the effect on peatland, where the majority of Scottish wind farms are located. 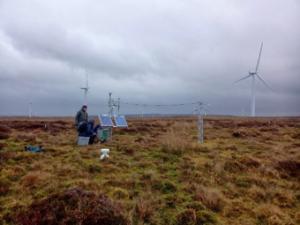 Researchers from the University of Glasgow, the National Centre for Atmospheric Science, Lancaster University, Leeds University and the Centre for Ecology and Hydrology placed a grid of 100 temperature and humidity sensors around wind turbines at ScottishPower Renewables’ Black Law Wind Farm in North Lanarkshire. For six months, they took readings from the air every five minutes and from the surface and soil every 30 minutes, including during a period when the turbines were switched off for maintenance.

Susan Waldron, Professor of Biogeochemistry at the University of Glasgow’s School of Geographical and Earth Sciences, said: “The trapped organic matter in peat bogs represents captured atmospheric carbon dioxide, which can help slow the pace of global climate change. A change in the atmospheric conditions of peatland could change their capacity to store carbon.

“It’s important to understand the effects of wind farms as they are projected to output seven percent of global energy production by 2035, with more than three-quarters of wind farm coverage on land. These effects are likely to be very small compared to the much larger effect that the changing of the seasons have on the temperature of peatlands.

“What we can take away from the study is that we are moving close to understanding how the environment responds to the steps we take to meet society’s energy needs and from this can make better decisions.”

The study was supported by funding from the UK Natural Environment Research Council (NERC), and access to Black Law Wind Farm was provided by ScottishPower Renewables.

The paper, titled 'Ground-level climate at a peatland wind farm in Scotland is affected by wind turbine operation', is published in Environmental Research Letters.