Today marks the official opening of The Force Awakens, the long-awaited seventh instalment of the Star Wars series of movies.

The crews behind the films created some of the most memorable designs in the history of cinema, including Han Solo’s Millennium Falcon and Luke Skywalker’s lightsaber, and countless fans have dreamed of the opportunity to try them for themselves. 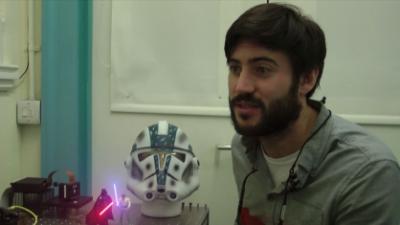 Now, nearly 40 years after the release of the original movie in 1977, is science getting any closer to bringing those fantastic technologies to life?

Dr Matt Edgar, of the University of Glasgow’s School of Physics and Astronomy, is involved in research projects which could turn some of the magic of the movies into reality.

Matt is a member of the Optics Group, a research team led by Professor Miles Padgett, which is harnessing the strange properties of quantum physics to bring some seriously sci-fi projects to life.

Matt explained: “Ultimately, everything is governed by the laws of quantum physics, and as researchers we seek to perform tests that reveal the rules of the universe. In principle, anything at a fundamental scale can be investigated, but it appears that light likes to wear its quantum clothes proudly. The quantum behaviour of light is already in some technologies, for instance to provide ultra-secure communications through a phenomenon known as entanglement, and there are many more applications which could benefit, such as imaging and computing.”

One Optics Group breakthrough, announced earlier this year, involved slowing particles of light down as they travelled through free space, effectively putting the brakes on the speed of light.

Matt said: “Shaping a light beam, and indeed individual photons, causes them to travel ever so slightly differently, analogous to taking a different path from one place to another. My colleagues Daniel Giovannini and Jacquiline Romero, managed to race two photons against each other across a distance of 1 metre, one of which was shaped differently to the other, and they observed that one arrived a few millionths of second later, equivalent to having its speed slowed down.”

So could slowing light help to make a real lightsaber? Matt is maintaining a healthy skepticism for now. 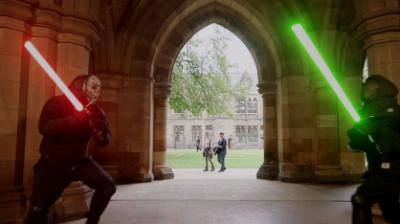 He said: “The lightsaber is only about a metre long, and somehow the light just stops in mid-air. In real life, this never happens unless something gets in the way to absorb or reflect the energy. However, reflecting the light at the end with a small mirror so that it can bounce back and forth and resonate is one way to build up large amount of power from very little.

“So-called optical cavities are fundamental to laser technology found inside commonplace devices like DVD players as well as forming the basis of extremely sensitive rulers, an advanced technology being pioneered by researchers here at Glasgow for detecting small vibrations in the fabric of space-time.

“Let’s assume for the moment that we found a way to slow light down, stop it one metre from the hilt in mid-air and conveniently store gigajoules of power in the hilt which thankfully is not melting your hand off.  It still wouldn’t make for a very useful weapon in a duel.

“Two lightsabers brought into contact would simply go straight through each other. The fundamental constituents of light, photons, just don’t bounce off other photons, or make a satisfying sound for that matter, at least not according to the physics taught here at Glasgow.”

However, work is continuing at Glasgow to bring other fantastic technologies to life. Earlier this year, the University of Glasgow was announced as the leader of one of four quantum technology hubs, supported by £270m in funding from the UK Government. The Glasgow-led hub, known as QuantIC, is developing new forms of quantum imaging.

Matt added: “Along with my colleagues in the Optics Group, we are developing a variety of advanced cameras for imaging infrared light using just one pixel, which is a colour where megapixel sensors become too expensive to manufacture, but is nonetheless important for seeing hazardous gases, enhancing visibility through smoke-filled and turbulent environments, and even providing night vision.”

Despite the difficulties of creating a lightsaber for real, Matt is still grateful for the role that science fiction played in inspiring his choice of career. He said: “I think all science fiction from my childhood, including Star Wars, played a role to interest me in science. I grew up thinking space travel was quite normal and that lasers could chop your hand off instantly. I now work with lasers on a daily basis, happily have all limbs intact, and I’m still hoping for a trip to space one day.”