Think of a world where a robot can not only carry a cup of tea to an elderly person, but can also sense whether it’s too hot to handle.

Currently, it’s not within our technological reach – but it may be soon, thanks to a £1.07 million funding grant from the Engineering and Physical Sciences Research Council to support the creation of ultra-flexible tactile skin for robotics and prosthetics.

The four-year funding under the EPSRC’s Fellowship for Growth programme has been won by Dr Ravinder Dahiya, who joined the University of Glasgow last year as a senior lecturer in electronic and nanoscale engineering. He is one of the leading academics from 10 UK universities to have been awarded a total of £13 million to maintain the UK’s research leadership in three areas – Advanced Materials, Robotic and Autonomous Systems, and Synthetic Biology.

To date, no robotics scientist has been able to create ultra-flexible tactile skin. Either the sensor has been too big or the electronics not sufficiently flexible.

Now, however, Dr Dahiya believes he is on the cusp of a breakthrough and that he has found a way of incorporating electronics and sensors on bendable silicon-based surfaces that will be 50 micrometers thick – thinner than the aluminium foil we use every day. 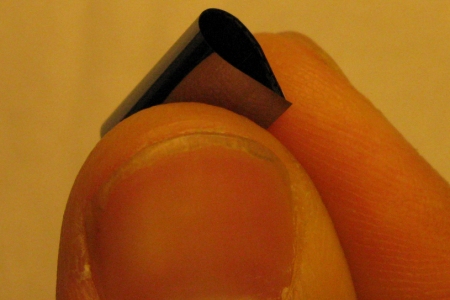 He will be working in collaboration with Professor Duncan Gregory, Chair in Inorganic Materials in the School of Chemistry, on the creation of silicon based nanostructures such as nanowires which are printed on bendable substrates in a manner that will eventually lead to flexible electronic or tactile skin with distributed sensors and electronics.

By developing a printing technique for high-mobility materials such as silicon, he will obtain high-performance electronics at a low cost base. This research will also use the state-of-the-art nanofabrication tools in the James Watt Nanofabrication Centre at the University of Glasgow.

"In the nanotechnology field, it will be a new paradigm whereby nanoscale structures are used not for nanoscale electronics, but for macroscale bendable electronics system. This research will also provide a much-needed electronics engineering perspective to the field of flexible electronics,” said Dr Dahiya.

His research is aligned with wider work on flexible electronics – the creation of bendable pieces of technology that will replace the flat screen computer or tablet.

In future, says Dr Dahiya, mobile phones will be more like a wristband, providing far more information than currently, such as carrying out health monitoring.

“Today’s robots are without skin which means they can’t feel the way we feel. But they need to be able to interact the way we do,” he said.

“As our demographic changes over the next 15-20 years, robots will be needed to help the elderly. In such a scenario, robots should have skin so that they can feel like we do – whether the surface is hard or soft, or rough or smooth. They should be able to feel weight,” he added.

Dr Dahiya envisages creating a “tactile” skin that would allow a robot to carry out various tasks ranging from lifting an elderly person or patient out of bed to gauging the right amount of pressure needed to carry a fragile china cup of tea from the kitchen to an elderly person in another room. He also foresees uses in the creation of more touch-sensitive prosthetics.

He already has strong industry links with the London-based company Shadow Robotics and prosthetics specialist Touch Bionics, based in Livingston; both companies will work alongside the researchers to check the effectiveness of their work.