Professor Miles Padgett, who holds the University of Glasgow’s Kelvin Chair of Natural Philosophy and was recently appointed Vice-Principal (Research), has been elected a Fellow of the Royal Society.

Professor Padgett is recognised internationally for his leadership in the field of optics and in particular of optical momentum. As well as making significant breakthroughs in his field, he has also been instrumental in the commercialisation of his research and has demonstrated widely his commitment to fostering public engagement with science. 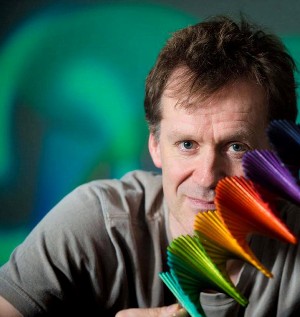 The Royal Society is a Fellowship of some of the world’s most eminent scientists drawn from all areas of science, engineering, and medicine and is the world’s oldest scientific academy in continuous existence.

Fellows are elected through a peer review process that culminates in a vote by existing Fellows. This year, 50 new Fellows and 10 new Foreign Members were elected from a group of over 700 candidates who were proposed by the existing Fellowship.

Professor Padgett said today: “I am both flattered and honoured that I have been recognised by my peers in this way.  I thank the University of Glasgow, the Research Councils UK and various industrial collaborators for funding the research, and perhaps most importantly the commitment of my Research Group – a team of highly motivated and talented early career researchers who share in this success.”

The Principal and Vice-Chancellor of the University of Glasgow, Professor Anton Muscatelli, said: “This is a great achievement and honour for Miles and I am delighted to offer him my warmest congratulations, both personally and on behalf of the University.  It is a special and prestigious accolade in that he is being recognised not just by his peers but by Fellows of the Royal Society. While first and foremost it acknowledges Miles and his outstanding contribution to the field of optics research, it also reflects the achievements of the team working with him and the University of Glasgow’s research strength as a whole.”

Professor Padgett’s best known contributions include an “optical spanner” to rotate microscopic objects; the use of optical angular momentum to increase the data capacity of communication systems; and the demonstration of an angular form of the Einstein-Podolsky-Rosen (EPR) paradox, establishing a new basis for the quantum studies of high-dimensional systems.  In addition to opening a new field of optical research, recognition of orbital angular momentum has led to a reappraisal of optics, where the spatial control of a light beam’s optical phase has driven areas as diverse as optical manipulation, quantum optics and imaging.

Throughout his career, Professor Padgett’s group has worked with end-users in different fields to develop new sensors and processes. Working with Siemens, they commercialised a spectrometer, which won the National Physical Laboratory Award, and was sold as the UV Falcon. In association with Shell they designed and deployed an optically-based ethane sensor for locating new oil and gas reserves.

Most recently, they have transferred techniques for video particle tracking and holographic manipulation to SMEs (small and medium enterprises) in the UK and USA.  These transfers have been though “Easy Access IP” – a new approach to knowledge exchange that lowers the historic barriers between universities and industry.

Sir Paul Nurse, President of the Royal Society, said: "Science helps us to better understand ourselves and the natural world on which we depend. Building scientific knowledge helps us to face some of the planet's biggest challenges such as food shortages, climate change and tackling disease. These scientists who have been elected to the Fellowship of the Royal Society have already contributed much to the scientific endeavour, whether that is in academia, industry or government."