A new laboratory space at the University of Glasgow, officially opened today (Friday 16 November), will help develop the next generation of the technology which found evidence of the existence of the elusive Higgs boson.

Particle physicists at the University of Glasgow were involved for more than 20 years in the development and construction of the semiconductor trackers in ATLAS, one of the detectors at CERN’s Large Hadron Collider in Geneva.

Data from ATLAS, which tracks the particles resulting from the proton collisions created in the LHC, played a vital role in the discovery of the Higgs boson. 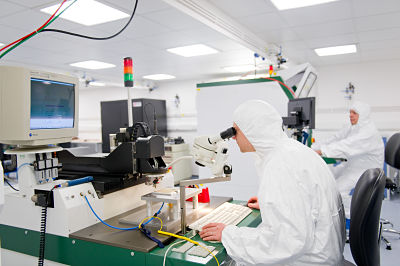 The University’s £370,000 Glasgow Laboratory for Advanced Detector Development (GLADD) will help scientists develop novel semiconductor tracker and pixel detector technology for use in ATLAS upgrades and in other applications including medical imaging and airport security.

The new clean-room laboratory in the University’s Kelvin Building contains a suite of state-of-the-art equipment including an ultrasonic fine pitch wire bonder to fabricate interconnects in electronic chips and a probe station to investigate the functionality of improved sensor designs. Just two other universities in the world – the University of California, Berkeley in the USA and the University of Bonn in Germany - currently have access to the same probe technology.

Dr Craig Buttar, head of the University’s ATLAS research group,: “The ATLAS project involved thousands of scientists from across the world working together to solve some extremely difficult scientific and technical problems.

“We’re very proud of the work we did to help build ATLAS but the demands of the physics challenges and the ever-improving nature of technology means that the system must and can be improved. We’re pleased to be playing a leading role in upgrading the system along with partners in the UK and abroad.

“GLADD represents a significant investment in particle physics by the University. The technology and expertise available in the laboratory will benefit not only ATLAS but also creates new opportunities for commercial partnerships in the fields of sensor development and imaging. The technology we’re helping to develop has novel applications in medicine, where it can be used to improve x-rays diagnostics, and in national security, where it can enable better detection of radioactive materials.”

Funding for GLADD was provided by the University of Glasgow and the Scottish Universities Physics Alliance (SUPA), which comprises the Universities of Aberdeen, Dundee, Glasgow, Edinburgh, Heriot-Watt, St. Andrews, Strathclyde and West of Scotland. The University’s PPE Group is supported by the Science and Technology Facilities Council (STFC).