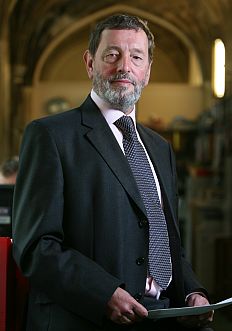 During his time as Education Secretary, David Blunkett worked closely with Bernard Crick to bring citizenship to the forefront of the education agenda; and later as Home Secretary he developed the programme of citizenship tuition and testing to encourage permanent residence to become citizens, and promote a shared understanding among “New and Old” citizens.

Bernard Crick was one of the leading political theorists of our time. He was best known for his In Defence of Politics (first published in 1962 and republished through five editions up to 2005), for his biography of George Orwell and for his work on republican democracy and citizenship. Bernard Crick was a scholar of international renown and taught in the UK at the LSE, Sheffield, Birkbeck (London) and Edinburgh.

In his later years he became involved in, and took a leading role in organising and promoting, the Stevenson Lectures at Glasgow University. He was the visiting Stevenson Professor 2006-7 having been presented with an honorary degree at Glasgow for  services to the study of politics and citizenship. Bernard Crick died in December 2008.

The Stevenson Trust for Citizenship decided to honour his memory by dedicating one lecture a year as the Crick Memorial Lecture. Given that during his time at Sheffield University Bernard Crick taught David Blunkett and given their close association in promoting citizenship, it is fitting  that the former Home Secretary should give the inaugural Crick lecture. The University is delighted that Bernard Crick’s partner and two sons are to be among the guests at the lecture.

Andrew Lockyer, St Kentigen Professor of Citizenship and Social Theory, will introduce the speaker and give some reflections on Bernard Crick, his one time teacher, colleague and friend. The talk - at 6pm on Tuesday 23 March in the Sir Charles Wilson Lecture Theatre, on the corner of Gibson Street and University Avenue - is free and open to the public.