Scientists at the University of Glasgow have devised a molecular 'LEGO toolkit' which can be used to assemble a vast number of new and functional chemical compounds.

Using molecules as building blocks they have been able to construct a molecular scaffold based on tiny (nano-scale) storage cubes. This new ‘designer route’ opens the door to many new compounds that, potentially, are able to act as the ion sensors, storage devices, and catalysts of the future.

Researchers within the Department of Chemistry created hollow cube-based frameworks from polyoxometalates (POMs) – complex compounds made from metal and oxygen atoms – which stick together like LEGO bricks meaning a whole range of well-defined architectures can be developed with great ease.

The researchers chose a ‘wheel-shaped’ polyoxometalate molecule, containing a 1-nanometre wide hole, which acts like a ‘window’ to the molecule. The cyclic compounds self-assemble in water to form beautiful cubic single crystals.

The ‘windows’ of the ring-shaped building blocks lead to very large internal pores meaning that these new compounds can effectively act like storage boxes for ions and small molecules. 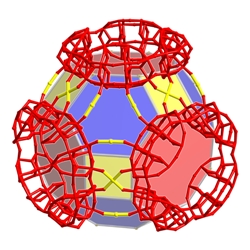 Professor Lee Cronin, Gardiner Chair of Chemistry, who led the study, said: “The ability to build highly-robust inorganic structures in a LEGO-like fashion is a huge boon to chemists, presenting many potential applications.”

In the compound reported, manganese ions link the wheel-shaped molecules together into the molecular scaffold. Positively-charged potassium and lithium ions are also incorporated in the framework to balance the negative charge carried by the metal oxide ions in the POM wheel. The frameworks themselves can also be ‘tuned’ by changing the charge on the manganese ions.

The molecular sensing aspects of this new material are related to the potassium and lithium ions, which sit loosely in cavities in the framework. These can be displaced by other positively charged ions such as transition metals or small organic molecules while at the same time leaving the framework intact.

These characteristics highlight some of the many potential uses and applications of POM frameworks, but their principle application is their use as catalysts – a molecule used to start or speed-up a chemical reaction making it more efficient, cost-effective and environmentally friendly.

Prof Cronin added: “Although catalysts are of huge industrial significance, many of the catalysts used today in industry are still expensive as well as ‘dirty’, creating environmentally harmful waste.”

“Our research focuses on the design and synthesis of nanoscale functional molecular architectures which can be used as industrial catalysts that are more energy efficient and environmentally friendly than current materials.”

“Extended modular frameworks that incorporate inorganic building blocks such as these represent a new class of tuneable materials with ‘active sites’ designed to respond to guest inclusion.”

“With a huge variety of POM wheel molecules available, further studies are required to build this family of materials based on the general design process that has been established. But moreover we aim to investigate the catalytic, sensing and guest exchange capabilities in more detail.”

The research is reported in the latest edition of the journal Nature Chemistry.