New exhibition will honour those who served in World War I

To mark Remembrance Day, there will be an exhibition of original documents and objects relating to staff and students of Glasgow University who served in World War I. The exhibition will be displayed in the University's Memorial Chapel until 15 November.

Last year, the University launched the Roll of Honour website to record the details of alumni and staff members who are known to have served in the First World War. Produced by the Hunterian Museum, in partnership with the University's Archive Services and the University Chapel, the exhibition will focus on three men who feature on the website: Archibald Allan Bowman (1883-1936), Arthur Lang (1892-1916) and Andrew Shaw (1892-1916).

Archibald Allan Bowman was born in Beith, Ayrshire, in 1883, the eldest son of an Evangelical Union Minister. He studied at Glasgow University between 1901 and 1905 before graduating with a first class honours in Philosophy and second class honours in Classics.

A A Bowman was appointed as an officer in the land forces at the rank of 2nd Lieutenant from the 13th September 1915. He was taken as a prisoner of war in 1918 during the Battle of Lys. In 1925 he returned to Glasgow University as Professor of Logic and Rhetoric, becoming Professor of Moral Philosophy in 1926.

The exhibition will feature his dress sword and his book Sonnets Written in Captivity.

Arthur Lang was born in Kilmacolm on 16th April 1892. He left school in 1909 and went to Glasgow University to study in the Arts Faculty. During his time at university he wrote and published poetry in the Herald and he shone academically. After the outbreak of the war, Arthur was keen to enlist and was commissioned as a 2nd Lieutenant to the 6th Argyll and Sutherland Highlanders and promoted to Lieutenant on 13th September 1915. Arthur Lang was killed in action in France on 29th August 1916. The colonel of his regiment wrote that his name had twice been brought to attention in March and April of that year for gallantry.

The exhibition includes Arthur's Diary for 1915, recording his war experiences.

Andrew McFarlane Shaw was born on 21st March 1892 and grew up in the Gorbals area of Glasgow before the family moved to the west end. Andrew began working as a Pathology Laboratory Assistant at the University in his early twenties.

A number or personal artefacts of Andrew's will be on display including his medals that were awarded posthumously, letters to his family and the cigarette box and matchbox holder which were battered and scarred by the shelling which killed him.

The Reverend Stuart D MacQuarrie JP BD BSc MBA , Chaplain to the University said: "This exhibition is aimed at showing the human being behind each of the names. Visitors are encouraged to imagine the families and friends they left behind, with their hopes and aspirations. And it is hoped that in the pictures and stories of these individuals we can find in our age, truth, integrity, excellence and respect for all people".

After the horrors of the First World War the University built the Memorial Chapel as a lasting memorial to its dead. The University Chapel was dedicated for divine worship on 4th October 1929. The names of the University men and women who fell in the Great War are recorded on the tablets at the east end of the Chapel. Various donations and gifts were made to the Chapel, helping to make it a place of beauty for worship and a worthy memorial for the University's dead.

A podcast describing the personal effects of Lance Corporal Andrew Shaw can be found on the Hunterian Museum and Art Gallery's website at www.hunterian.gla.ac.uk/collections/object_month/current/

1. For more information please contact the Media Relations Office on 0141 330 3683 or email K.Richardson@admin.gla.ac.uk

2. Images of Andrew Shaw, his medals and his cigarette box are available from the Media Relations Office

3. Further information and podcast on the personal effects of Lance Corporal Andrew Shaw can be found at www.hunterian.gla.ac.uk/collections/object_month/current/

4. The online Roll of Honour can be viewed at: www.archives.gla.ac.uk 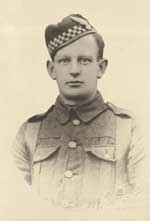