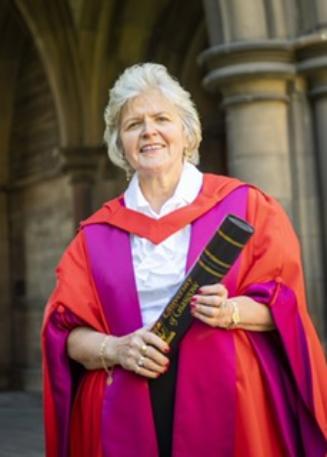 Lady Rae was installed as our new Rector in a ceremony in Bute Hall on 15 July. Her full speech can be viewed below.

It is a great honour for me to be here, now installed in the post of Rector of this prestigious University.  A role which has a lengthy and significant history, the first Rector having been elected in 1452!  I follow in the footsteps of many amazing men, some of whom were leaders in their fields and men of great intellect and distinction. In no sense, can that description apply to me.  I am not a man for one thing!  However I am truly humbled by the honour the students have bestowed upon me, thus allowing me to be the University’s first female working Rector.

As you all know the rectorial election was to take place last year on the day of the first lockdown. It was cancelled and I was saddened to think that the opportunity to serve as a Rector might have been lost.

When I was first approached in 2019 by an enthusiastic group of students, I did my utmost to put them off.  I emphasised my age and that I was anticipating, albeit reluctantly, a peaceful and stress-free retirement.  Also it had been a long time since I had experienced University life as a student.

In an unexpected turn of events I was lured out of retirement to sit part time in my former post as a Senator of the College of Justice. Then, to my great delight, I was asked again to run in the rectorial election.

What an enthusiastic and enlivening group of students I encountered both in 2020 and 2021.  I am so in awe of them and my admiration for them has strengthened my commitment to represent their interests and fulfil the role of Rector to the very best of my abilities.

Since the election result I have continued to meet some impressive young people, including the presidents of four of the student bodies - all female!

A female Chancellor as well and now a female Rector!

It is time to let you all into a secret.  One hidden for many years. Only recently I told a couple of people from the University about it and i was persuaded to reveal the information in this address.

Many years ago, 1967, when I decided to study law, I applied to only two Universities - Glasgow and Edinburgh.  I was offered a place at Edinburgh but  before accepting I waited with anticipation to hear from Glasgow  Obviously, there were doubts about me so Glasgow University decided I had to be interviewed before making a decision.  I can remember that day vividly although the faces of the men are blurred.  Being painfully shy at that time I do not think I impressed them although who knows?  I don’t!

I still have no idea whatsoever whether I was accepted or not.  Either my interview was so bad that they decided it was not worth replying or, somewhere  in the archives of the University, there is a letter waiting to be posted!

I want to thank both my campaign teams and the students of the University of Glasgow. You were all so encouraging, motivating and supportive – and these qualities are essential in creating the best possible environment in an institution for higher education.

The importance of education, especially for people like me who do not come from what might be termed “privileged backgrounds” cannot be underestimated. The opportunity to engage with students during the most exciting and challenging years of their lives is a real privilege.

I relish the opportunity to listen to the students, to support them, and to pass on my knowledge and experience - if requested of course!

I want to thank the University and the staff for welcoming me and offering support.  In particular I wish to thank the Principal, Dr Duncan and members of the University Court who have given of their time to meet me on Zoom, each explaining their various roles and giving me an insight into some of the big issues to be faced by the students and the University.

This is a steep learning curve, way out of my comfort zone and  I feel I am having to learn a whole new language - mind you I am never going to master the acronyms!

We are in strange times.  We have had to adapt to a completely different way of living and working.  It has created particular stresses and disappointments for all but especially for students who have had little or no opportunity in the past 16 months to get the full University experience due to strict Government regulations directing us.

In the short time I have been in post I have learned of some, I emphasise some, of the issues which concern students, not least of which is the wish, if safe to do so, to move back to campus and more traditional learning methods and the wish to have access to international study opportunities. I know that there are many other issues and challenges facing the students and the University and where I can, I want to assist.

Inevitably I too will face challenges but be assured, I do not begin this role naively, expecting the path to be a smooth one.  Nothing in my career path has been smooth!  So I would hope to bring to this position the skills I have developed and practised throughout my legal career in various roles, including a sense of balance, justice and fairness, resisting prejudice, unfairness and discrimination.

My message is a simple one.

I want to work with and for the students to represent their interests.

I want to work with the University.

I am prepared to challenge if challenge is necessary but if we work together that will be the best way to achieve the most favourable outcome for students.

In summary my dear friends and colleagues, the University of Glasgow has a new Rector who is deeply humbled by the students’ vote of confidence and who believes that she has, at least, a moderate contribution to make to this esteemed institution.

Plans of that dreaded, quiet retirement and that niggling curiosity of whether that letter of rejection in the archive still exists have finally been put to bed. My hope for the future has been greatly invigorated by the contact I have had so far with the students and University personnel alike.

In many disciplines there is the profound belief that history always informs the future and when it comes to our shared aspirations for this University we need look no further than our very own Papal Bull of foundation of 7th January 1451 by Pope Nicholas V who aspired,  and I paraphrase slightly:- "That in this place equity in judgement be upheld, reason flourish, minds be illuminated, and understandings enlightened;  that this place produces students distinguished for ripeness of judgement, crowned with the ornaments of virtue and erudite with the dignities of the various faculties and that there may be an overflowing fountain of the sciences out of whose fullness all that desire to be imbued with the lessons of knowledge may drink."

And with the risk of a liberal interpretation of this sentiment, let the drinking begin!

More about the new Rector and her role can be found online.