The University of Glasgow has confirmed that Des McNulty stepped down as Assistant Vice Principal (Economic Development and Civic Engagement) at the end of September after four years in post.

Mr McNulty’s relationship with the University will continue as he takes on an Honorary role and he will carry on working with the Principal as Vice Chair of the Commission for Economic Growth.

Mr McNulty said: “It has been a privilege to work with so many established experts from a wide range of academic disciplines and with early career researchers, postgraduates, student interns and university services colleagues, mobilising the University’s institutional and knowledge capabilities to help meet the opportunities and challenges faced by Glasgow and the city-region”.

“By pro-actively contributing to the wellbeing of the city, the University is enhancing delivery of its wider objectives. I am proud to have contributed both to strategic thinking and delivery in that regard and to building stronger partnerships with civic and community partners”.

Professor Sir Anton Muscatelli, Principal and Vice-Chancellor, said: “I am grateful to Des for all that he has done for the University, both as a member of our governing body and as a colleague.

“As Assistant Vice-Principal, Des has done much to progress the University’s aims and ambitions in the sphere of civic engagement, to ensure that we fulfil our important mission as an anchor institution within the city of Glasgow and the wider region.

“Personally, I have very much appreciated the support Des has provided as Vice Chair of the Commission on Economic Growth for the Glasgow City Region and I look forward to our continued work together in that forum.”

Mr McNulty joined the University of Glasgow in 2012 to support knowledge exchange within the School of Social and Political Sciences.

He was involved in securing the grant for the Urban Big Data Centre as well as in the establishment of Policy Scotland as the University’s vehicle for engagement with policy makers and the policy process.

He became Dean for Public Policy and Knowledge Exchange within the College of Social Sciences in 2016 and was appointed Assistant Vice Principal in 2017.

Mr McNulty initiated and developed the proposal to establish the Glasgow Riverside Innovation District and most recently led the development of the University’s civic strategy.

Other service to the University of Glasgow included an earlier five-year stint as a member of Court during which he helped facilitate the acquisition of the St Andrew’s Building, enabling the move of the School of Education from Bearsden to the main campus.

Before working in higher education, Mr McNulty became one of the first members of the new Scottish Parliament in 1999. His period as an MSP included two spells as Minister for Social Justice/Communities and nearly five years as Chair of the Parliament’s powerful Finance Committee. With George Reid, he established the Parliament’s International Development Cross Party Group and played a critical role in strengthening Scotland’s landmark Climate Change Act 2009. 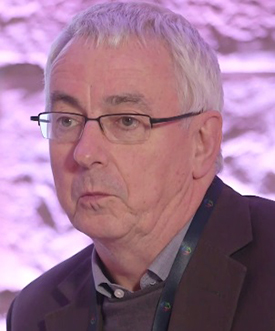