The UK and Scottish Governments are working hard to protect us all from the sort of terrorist attacks we have seen in many parts of the world.

The University of Glasgow campuses are pretty safe places, but it’s a good idea to make sure you know what the best advice is in case things go wrong.  In 2007 there was an attempt to drive a vehicle loaded with gas canisters into the Glasgow Airport terminal: so nowhere in the world is immune.

The UofG’s security team recommends you take just a few minutes to watch the ‘Run, Hide, Tell’ movie – it lasts just under four minutes, but could keep you safe.

The film advises those who get caught up in an incident to ‘run, hide and tell’ - guidance which can be applied to any place. Security experts know that from case studies and real life testimony based on the experiences of people who have survived attacks the advice given in the film has saved lives.

The UofG’s new Head of Security, Gary Stephen, told Campus e-News: “Our advice, wherever possible, is to follow the Run Hide Tell guidance until the police arrive on the scene. The guidance recommends RUN, if you can, if you can’t run, HIDE and then, when you can, TELL the police what’s happening so they can get help there quickly to stop the threat.

“Also tell others of the threat so they don’t approach danger. However, if someone is in immediate danger and their life is being threatened we would never criticise their actions if instinct takes over and they feel the need to fight back.” 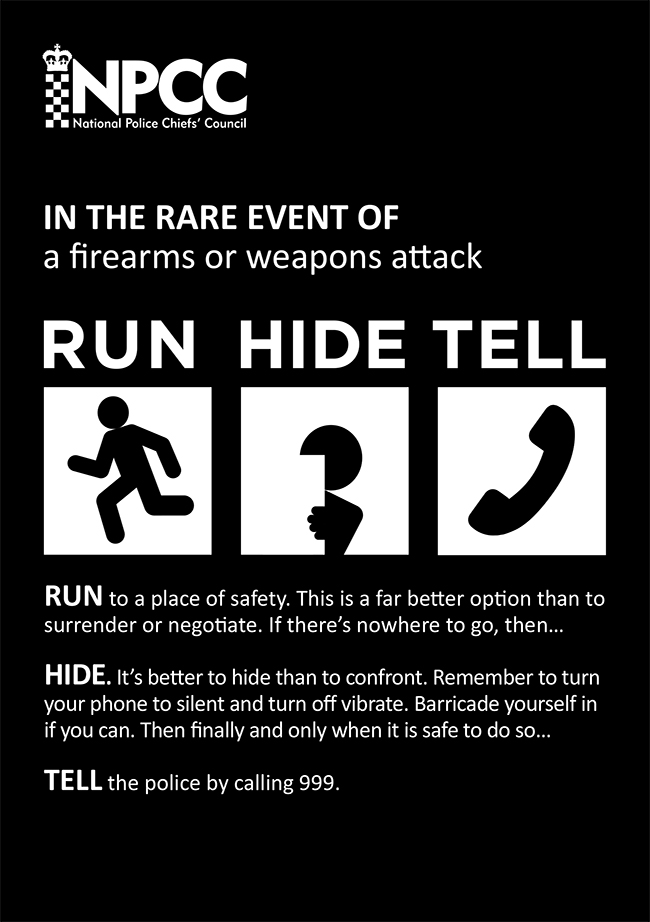