Night of awards success for UofG

The University of Glasgow's Dr Charlotte McCarroll has been named as Diversity Hero of the Year at the inaugural Diversity Awards organised by The Herald and GenAnalytics in association with Bank of Scotland.

‌More than 300 guests gathered at the Radisson Hotel for the awards ceremony which showcased the companies, organisations and individuals that are making a real difference to their communities and businesses by putting equality and diversity at the heart of their actions and in the workplace. 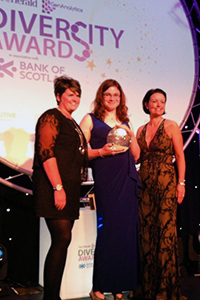 Dr McCarroll was nominated for the award by Professor Rhian Touyz, Director of the Institute of Cardiovascular and Medical Sciences.  Rhian said: "I put Charlotte forward for this award in recognition of the tremendous efforts and tireless work she has done to promote equality and diversity in the University of Glasgow, in large part through her own personal experiences.

"Charlotte qualified as a veterinary surgeon from the University of Glasgow in 2008 with a distinction/honours award and in 2014 she obtained her PhD. She is currently completing a post-doctoral fellowship in the Institute of Cardiovascular and Medical Sciences (ICAMS), with the goal of developing her own research group as an independent investigator. Charlotte has an outstanding track record and she is on a trajectory of growth and success." 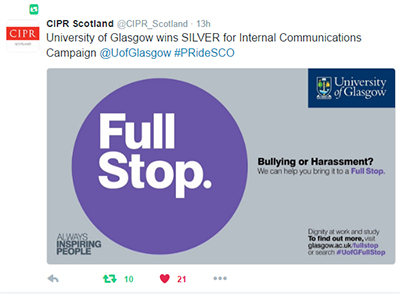 While Dr McCarroll was receiving her award in Glasgow, the University of Glasgow was picking up two more awards at the Chartered Institute of Public Relations Scottish PRIDE awards in Edinburgh. The two, silver awards were:

The gravitational waves campaign was conceived and executed by the Social Media team in Communications and Public Affairs.  FullStop was a campaign resulting from a partnership between HR's Equality and Diversity Unit, Communications and Public Affairs and the Students' Representative Council (SRC). The graphic design inspiration for FullStop was provided by Adam Piggot and his Glasgow-based design company Red Empire.